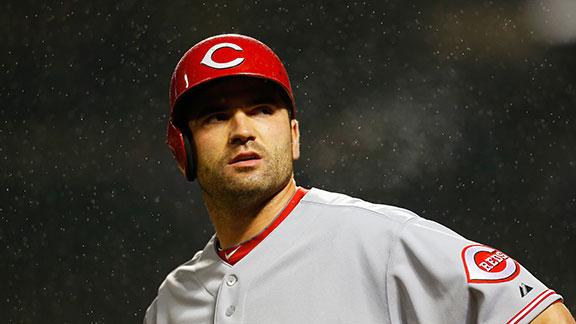 Cincinnati Reds first baseman Joey Votto, who has missed 23 games this season, was again put on the disabled list Tuesday with a nagging thigh injury that is expected to limit him for the rest of the season.

Votto, the 2010 NL MVP, missed the past two games and had an MRI on Monday afternoon that showed he had aggravated the injury. The Reds have said they'll try to keep him in the lineup as much as possible as the season continues.

"Our plan of attack will be to do everything we can to get him back to play over the course of the year," manager Bryan Price said Tuesday. "We don't have a timetable on how long that will be, but the goal is to get him back and able to help us before the year is out."

Votto, who came off the DL on June 9, is batting only .250 in 23 games since and hasn't homered since May 10. He struck out three times during a 1-0 loss to Milwaukee on Saturday and did not play Sunday or Monday. He is playing under a $251.5 million, 12-year contract that he signed in April 2012.

"I think we'll see how things unfold here in the next couple of weeks," Price said. "It's a talking point, but right now that's all it is."

Right fielder Jay Bruce played first base Monday for the first time since high school. He had an error but later homered in the Reds' 9-3 victory over the Chicago Cubs.

Catcher Brayan Pena, who will be a primary fill-in at first base while Votto is gone, is returning Tuesday after being in Florida on paternity leave for two days.

Third baseman Todd Frazier also has played at first base and started there for the first game of a doubleheader on Tuesday.

For now, Price plans to use those three at the position.

"I don't want to create a black hole over there," Price said. "I don't think we will. I wouldn't put someone over there if I didn't feel they were capable of holding down the position. That being said, we don't have a lot of players with any real history as true first basemen."

Fantasy Now: Joey Votto
Stephania Bell joins Eric Karabell to discuss Joey Votto's latest trip to the DL and his value for the rest of the season.