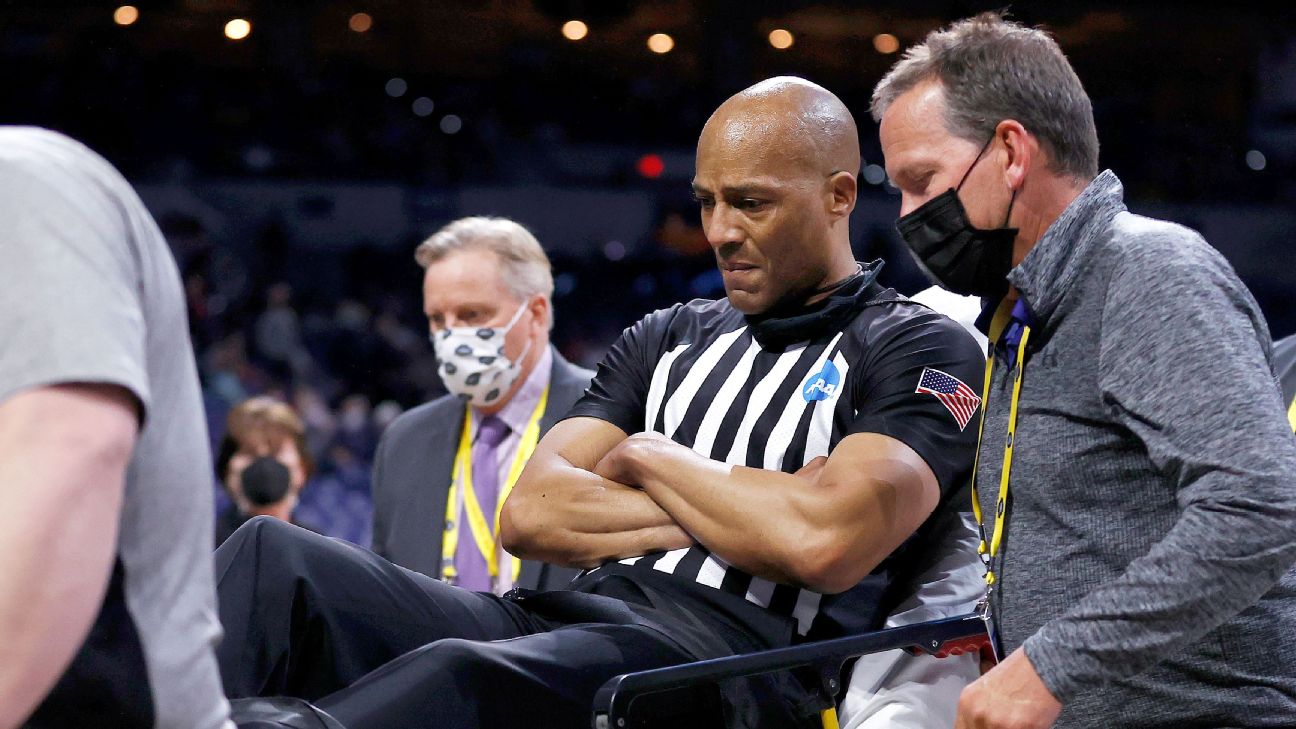 The referee who collapsed during Gonzaga's matchup against USC in the NCAA men's basketball tournament had a blood clot in his lung, The Indianapolis Star reported Friday. Bert Smith told the publication the fall might have saved his life.

He was officiating the Elite Eight matchup last month in Indianapolis when he suddenly collapsed near the Gonzaga bench. Medical personnel and other staffers rushed toward him. Players on both teams returned to their benches.


Smith, 56, regained consciousness, and he was alert as he was carried off the floor on a stretcher. Medical personnel at Lucas Oil Stadium treated Smith, who later went to a local hospital. That's where he learned his scary fall was related to a blood clot in his lung.

"You don't know where that clot was going next," Smith told the Star's Gregg Doyel.

He was released after two days in the hospital.

"It puts in perspective the value of each day, because we all go through our lives -- we're all guilty of it -- and we just live, right?" Smith told the publication. "But do we say 'I love you' enough? Do we give an extra hug enough? Do we do the things with our family and friends that have value to them? When you live something like I did, it hits you square in the eyes that you really have to value each day."


A replacement official was added to the crew after Smith collapsed.

After the game, Gonzaga coach Mark Few said he had walked over to Smith to offer his support as Smith was being placed on the stretcher.

"He's a great official, great person," Few said after his team's 85-66 win to advance to the Final Four. "I mean, I was just shocked and scared for him, but I was able to stick my head in there a little bit and see that he was talking and coherent and tried to say a quick prayer for him and just wished him the best."
Report a correction or typo
Related topics:
sportsespnnewsgonzaga bulldogsmens college basketballusc trojans
Copyright © 2021 ESPN Internet Ventures. All rights reserved.
TOP STORIES
Will LA follow NYC vaccine mandate for restaurants, bars, gyms?
Teen living on streets found in Lancaster; search for family
3 killed, 2 hospitalized after multi-vehicle crash in Burbank
Woman sues LA after hit by car on street where tents block sidewalk
Spirit Airlines cancellation of hundreds of flights enters 4th day
Mega Millions ticket worth nearly $1.1M sold in Pacoima
Offspring drummer dropped from tour for not getting vaccinated
Show More
Azusa police fatally shoot armed domestic violence suspect in Glendora
Mom gives birth in same hospital where husband died of COVID-19
Astros weather raucous crowd in LA, blank Dodgers 3-0
Frontier Airlines backing flight crew who restrained unruly passenger
72,000 US kids caught COVID last week, a 'substantial' spike
More TOP STORIES News