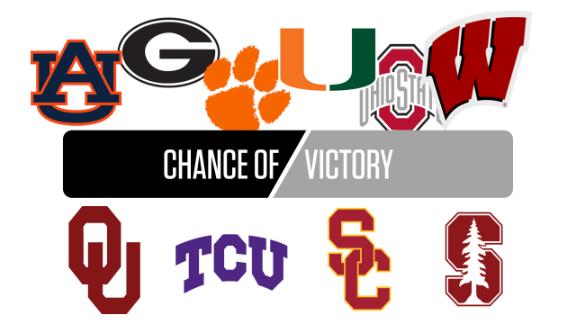 Brown's Longhorns, in the middle of a 9-5 season, had upset the Cornhuskers in Austin earlier in the season to make the Big 12 title game. But led by eventual Heisman winner Eric Crouch, Nebraska was one of the top teams in the country. In the rematch, the Huskers exacted revenge, wiping out the Longhorns 22-6 in a game not nearly as close as the final score.

"As a coach, I didn't like rematches," Brown said. "All the pressure is on [the favorite]. And if you lucked by the other team, you're probably going to get beat."

This weekend, three of the five Power 5 championship games will feature rematches from the regular season, as will the American in the Group of 5.

In the Big 12, Oklahoma will attempt to hold on to pole position for the College Football Playoff against TCU. In the Pac-12, USC and Stanford will reprise their early September clash. In the SEC, Auburn and Georgia will do battle again, with the spoils of a playoff berth more than likely going to the victor.

Rematches, however, can be tricky affairs. It's especially difficult for those teams that prevailed the first time, most notably when the two sides are rather evenly matched.

"It's the toughest way, to go through a team a second time," said former LSU coach Les Miles, who noted that for the losing squads this week, "the conference championship is almost secondary in motivation."

Miles would know. He experienced, firsthand, the difficulty in defeating a top-notch team twice in one season.

In 2011, his No. 1 Tigers toppled No. 2 Alabama 9-6 in overtime in a classic SEC defensive struggle in Tuscaloosa. Afterward, Miles said then he'd "be honored to face" the Crimson Tide again, unsure if such an obstacle would present itself.

As LSU marched on to an unbeaten regular season before being coronated SEC champs, Alabama quickly bounced back and stalked the Tigers the rest of the way. When Oklahoma State fell at Iowa State late in the year, the Crimson Tide slipped back into the No. 2 spot in the BCS, despite not playing for a conference title, and ultimately into the national title game. In the rematch, Alabama's star-studded defense suffocated the Tigers on the way to a convincing 21-0 victory.

In this weekend's SEC rematch, Miles said the onus would be on Auburn to match Georgia's intensity, which is sure to be on overdrive in the wake of the drubbing it suffered three weeks ago.

"They're fixing to play the same Georgia team, but this is not the same Georgia team," Miles said. "It's not something you can just put out there one time. It had better be that practice, that period -- that period was so stinking average, that you didn't understand you're getting ready to play a team that you beat and now they want you. That needs to be said by [Auburn coach] Gus [Malzahn] routinely. So that they understand, this is what you're going to run into. ... This [Georgia] team is going to be highly motivated, we must match their effort and energy and exceed it."

Intensity, however, won't be the only determining factor in the rematches this weekend. There are tangible benefits for the revenge-seekers.

As Oklahoma quarterback Baker Mayfield noted this week, adjustments, both beforehand and also on the fly, will play a major part, as well.

They certainly did for Florida in 1996 leading up to the Sugar Bowl. That year, in another showdown of No. 1 vs. No. 2, the Gators ended the regular season with a 24-21 loss at rival Florida State. Behind Heisman quarterback Danny Wuerffel, Florida had the top offense in the country. Florida State's athletic pass rush, however, overwhelmed the Gators, preventing Wuerffel from delivering passes unscathed.

Florida came back to drill Alabama in the SEC title game, setting up a national championship rematch with Florida State. And with weeks to prepare, coach Steve Spurrier devised a wrinkle that would turn the advantage back Florida's way.

"Realizing both the talent of the FSU pass-rushers, along with the amount of man-to-man defense they were playing, we implemented the shotgun," Wuerffel said.

With time to pass again, Wuerffel carved up the unsuspecting Seminoles in New Orleans, and Florida won easily 52-20 to capture the national title.

"That one change had a dramatic effect," Wuerffel said.

Two years before, momentum was the difference-maker in the series.

During the regular season, Florida and Florida State had played to a 31-31 tie. But in the "Choke at Doak," the Gators had felt as if they had really lost after blowing a four-touchdown lead in the fourth quarter, while Florida State was ready to play another four quarters. When the rivals were paired again in the Sugar Bowl a month later, the Seminoles got their wish.

"Our confidence was so high," former Florida State running back Warrick Dunn said. "Going into the rematch, it wasn't a matter of us having a chip on our shoulder. We had them on the ropes and we just picked up where we left off."

Billed as "The Fifth Quarter in the French Quarter," Florida State jumped to a two-touchdown lead, then held on for a 23-17 victory.

"I don't remember feeling like it was that close," former Florida receiver Chris Doering said. "As much as we had talked about getting revenge ... it was such a difference from the first three quarters to the last five."

Sometimes when it comes to rematches, though, it doesn't matter which team has the motivation. Or the momentum. Or even the best adjustments.

In 2005, Brown's Longhorns had replaced Nebraska and Oklahoma as the Big 12 team to be feared. Texas cruised against Colorado in the regular season, and in a conference championship game rematch, Texas obliterated the Buffaloes 70-3 on the way to knocking off USC in the Rose Bowl for the national championship.

"We were on a mission," Brown said. "To be the best team in the country."

On rematch weekend, Oklahoma and Auburn will be on a similar mission.

USC and Stanford will hope to keep their late-season momentum rolling.

TCU coach Gary Patterson will look to personify Spurrier from the other side of the ball for the game-changing defensive adjustment against Mayfield.

And Georgia will be out for good old-fashioned SEC revenge.