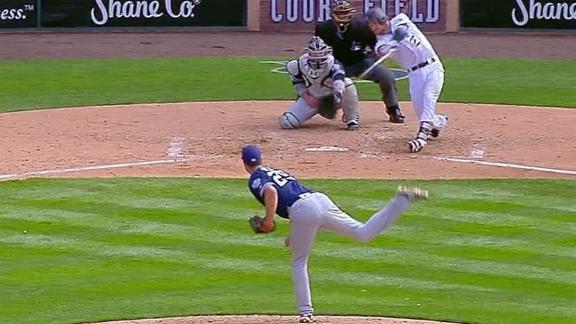 DENVER -- Colorado rookie sensation Trevor Story'shome-run surge continued Friday, when he homered twice to become the first major league player to connect in each of his first four games.

Story became just the fifth major league player since 1900 to homer in each of his team's first four games of a season. He joinsChris Davis, who did it for the Baltimore Orioles in 2013,Nelson Cruzfor the Texas Rangers in 2011, Mark McGwire for the St. Louis Cardinals in 1998 and Willie Mays for the San Francisco Giants in 1971.

Story, 23, has hit six home runs since he made his debut on Opening Day. He hit a two-run drive off San Diego right-hander Colin Rea in the fourth inning and then hit a solo shot off Ryan Buchter in the ninth. The Padres won, however, 13-6.

"I've said it before, I'm not trying to hit home runs," Story said. "Sometimes it kind of happens."

Nobody before him had ever posted two multi-homer games in his first four big league games, according to the Elias Sports Bureau.

Cooperstown already has Story's helmet and batting gloves. Keep this up, Gonzalez said, "and he's going to go to the Hall of Fame'' himself.

From the on-deck circle, Gonzalez has had the best view of Story, who hit 70 homers in five minor league seasons. Story got three hits and drove in four runs Friday. He's hitting .368 with 11 RBIs.

"I don't think I've ever seen anything like it, let alone a rookie," Rockies manager Walt Weiss said. "He's fun to watch, one of the few bright spots today."

Even the Padres were talking about Story.

"He's come out of nowhere,'' San Diego outfielderMatt Kempsaid. "I think anybody who hits six homers in four games, especially being his first week in the big leagues, is impressive. He's got a great swing. It's definitelyharder than it looks."

Story played for the first time at Coors Field on Friday. The Rockies raised the height of the fences over the winter, but Story's 411-foot drive down the left field line Friday was a no-doubter. It pulled the Rockies to 6-5 and chased Rea.

His ninth-inning shot came with the bases clear and the Rockies trailing, 13-5. Story also had an RBI single in the second.

Story won the starting job this spring after star shortstop Jose Reyes was suspended with pay under the sport's new domestic abuse policy just before the start of spring training for an alleged incident with his wife at a Maui resort hotel on Oct. 31.

Rockies owner Dick Monfort said Friday that if Reyes "did something wrong, he should pay for it."

Monfort, who spoke with commissioner Rob Manfred on Thursday and wasn't given a timetable for a decision, said he was unsure whether the public relations aspect or a possible fan backlash would play a part in any future decisions about Reyes.

"I'd like to know exactly what happened," Monfort said. "It's easy for us all to speculate on what happened. But really, until you really know, it's hard. You're dealing with a guy's life too. But if he did something wrong, he should pay for it."

Reyes was scheduled to go on trial last Monday after pleading not guilty to abusing a family or household member. However, prosecutors decided to drop the charge after saying Reyes' wife wasn't cooperating with the investigation. Manfred has said he expects to make a decision on Reyes soon.