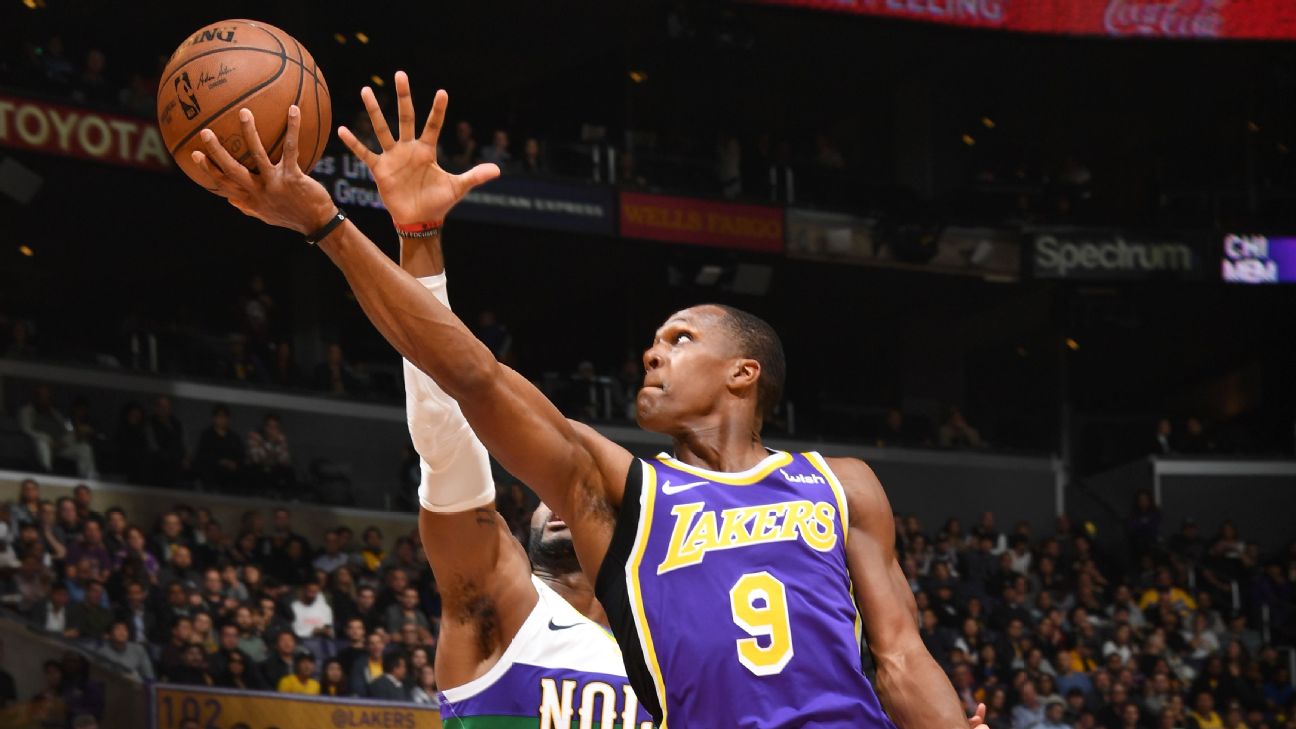 LOS ANGELES -- With the Los Angeles Lakers' playoff push in desperate need of a jolt, Luke Walton and Rajon Rondo had a long one-on-one talk to see how to get the team back on track.

"It was an honest conversation," Walton said. "It was healthy and positive."

Perhaps more important was that Rondo was feeling healthy again. He returned to the Lakers from the All-Star break with a stiff back that had limited him to a total of 11 points, 11 assists and nine rebounds in the Lakers' first three games back.

After losses at New Orleans and Memphis, Walton opted to insert Rondo into the starting lineup on Wednesday. Rondo responded with 11 points, 16 assists and seven rebounds to help LeBron James and the Lakers snap a two-game slide with a 125-119 win over the New Orleans Pelicans.

James delivered 33 points, 10 assists and six rebounds. Three of his points came on a tightly contested, shot-clock-beating corner 3-pointer off one leg with 31.3 seconds left that gave the Lakers a six-point lead.

Rondo was feeling much better, and it showed. He said he had been suffering from back pain for about four days, and he had difficulty getting out of bed.

"I think I slept on a bad bed in Jamaica," Rondo told ESPN's Ramona Shelburne about what slowed the veteran point guard down the past few games.

Looking for anything that could spark the Lakers, Walton started Rondo, Reggie Bullock, Brandon Ingram, James and Kyle Kuzma against the bigger Pelicans, who played Anthony Davis for 20 minutes.

Rondo dished five assists in the third quarter and then found his shot in the fourth when he made three of four shots and scored seven of his points.

"I think with Zo [Lonzo Ball] out and our turnover situation as of late, just bringing another ball handler in there, another natural point guard in there, will just help us all," James told ESPN's Dave McMenamin of Rondo starting with Ball out with a Grade 3 sprained ankle. "With me and B.I. [Ingram] not having to have all the ball-handling responsibilities in the first lineup, bringing 'Do [Rondo] in there, it just gives us another mind first of all. The cerebral part of it all is huge. And then it just keeps us with some stability out there.

"We were able to get pace. We had 19 fast-break points. We had 37 assists. Between me and 'Do, we had 26 assists and [the team] only had eight turnovers. Obviously that ratio was ridiculous. That's some Golden State s--- right there. ... By us not turning the ball over, it allowed us to set our half-court defense and we looked pretty damn good."

Ingram and Kuzma continued their strong play of late. Ingram scored 23 points and grabbed six rebounds, and Kuzma had 22 points and five rebounds while battling bigger Pelicans in the paint.

The Lakers trailed by five midway through the third quarter, but then Kuzma started a 10-1 run that saw the forward dunk three times with James throwing down another slam. At one point, the Lakers had three straight dunks that brought the team and the arena to life.

And then it was James who basically clinched the much-needed win for the Lakers with his big 3-pointer on the same night that his best friend, Dwyane Wade, nailed a game-winning fling off the glass at the buzzer to stun the Golden State Warriors in Miami.

"The degree of difficulty, mine was a little bit more difficult than his," James said when asked whose shot was tougher. "His was weird. I don't even know if it was even a shot. It was like, you know how you play pop-a-shot? And he had to because he had no time, but yeah, I think my shot was more difficult."

On a night when the LA Clippers and Sacramento Kings both lost, the Lakers now are three games back of the Clippers and San Antonio Spurs for the seventh and eighth spots in the Western Conference standings.

On Friday, Ball will be re-evaluated medically to determine his status. On Wednesday, though, the Lakers were glad to see one of their point guards feeling better and more like himself.

"I'm very confident in what Rondo has done in this league," Walton said. "He's struggled a little bit, but some of that is on me. His minutes have been down, too, and we have been trying to find different groups to work.