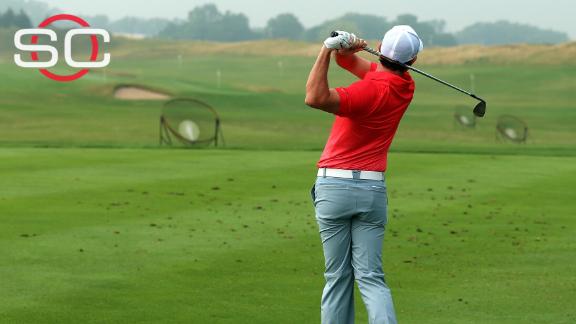 SHEBOYGAN, Wis. -- World No. 1Rory McIlroy played his third consecutive day of golf at Whistling Straits on Monday, site of the 97th PGA Championship, and declared himself fit to defend his title after sustaining an ankle injury on July 4.

The Northern Irishman suffered ligament damage in his left ankle while playing soccer with some friends in a "kick-about" on July 4. He hasn't played since the final round of the U.S. Open on June 21 and withdrew from The Open at St. Andrews as well as last week's WGC-Bridgestone Invitational.

He was the defending champion at those two events.

The four-time major winner, who has been hitting balls since July 28 and said he also has been running on a treadmill, feels pleased about the state of his game.

"I'm finding the middle of the clubface," McIlroy said. "I think the one thing for me was if my short game was sharp. But I've been chipping and putting since basically this happened. I was putting in the boot. So I've kept that part of the game sharp. So everything feels pretty good."

When asked whether he can trust how his ankle will respond with the power and force of a 100-plus mph golf swing under tournament conditions, he didn't hesitate.

"It actually feels better when I go at it as hard as I want, because my left foot sort of spins out of the way whenever I hit the driver anyway," McIlroy said. "So it's more if my left foot was to stay sort of completely flat, like roll on to the left side like a lot of guys do, then it would obviously probably create a few problems. Because mine sort of spins out of the way, it takes a lot of pressure off it."

The Westgate Las Vegas SuperBook listed McIlroy's odds of winning the PGA Championship at 10-1, second only to those of Masters and U.S. Open winner Jordan Spieth, who was listed at 6-1 on Monday morning.

The two-time PGA Championship winner acknowledged that he played 72 holes recently in Portugal and was even discussing with his team whether he could play last week at the WGC-Bridgestone Invitational, mainly because it was a no-cut event and he would be guaranteed to play four rounds.

In a misty rain Monday on the shores of Lake Michigan, McIlroy made back-to-back birdies on the short par-4 13th and 14th holes while adding another at the par-5 16th. That final birdie saw him launch a fairway wood shot from the middle of the fairway to find the front edge of the green. His eagle putt, which he made with his chipping wedge, slid just past the hole.

As for the rest of the week, McIlroy plans to play nine more practice holes Tuesday and another nine Wednesday. He is grouped for the first two rounds of the PGA Championship with world No. 2 Spiethand The Open champion Zach Johnson. They tee off at 2:20 p.m. ET on Thursday.

McIlroy finished third, one shot out of a playoff, when the PGA was played at Whistling Straits in 2010.