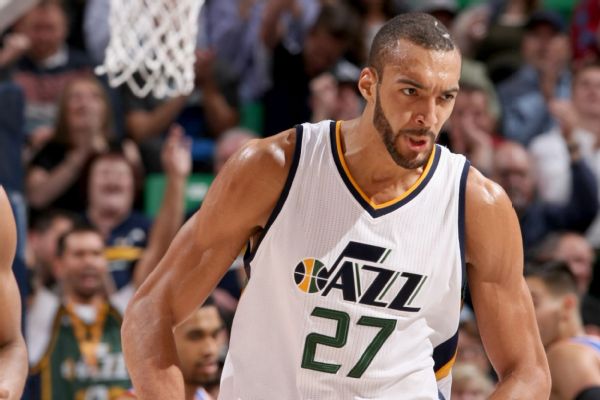 Utah Jazz center Rudy Gobertreturned and starred in Utah's105-98 Game 4 win against the Los Angeles Clipperson Sunday after missing two games with a knee injury that he suffered in the opening minute of Game 1.

Gobert, a contender for Defensive Player of the Year and All-NBA honors, hyperextended his left knee and suffered a bone bruise on the first possession of this first-round series. On Sunday night, he had 15 points on 6-for-6 shooting plus 13 rebounds in 24 minutes as the Jazz evened the series 2-2.

Jazz coach Quin Snyder said Gobert had a significant impact despite not being 100 percent.

"The biggest thing was his defensive rebounding," Snyder said. "We were able to secure more balls. That really hurt us the last game."

Meanwhile, Jazz guard Gordon Hayward didn't return for the second half after being limited to nine minutes in the first half. The team said he was dealing with the effects of food poisoning.

Snyder said Hayward wanted to play, but he "just didn't have anything" after he got on the court.

"They put him in a dark room and put a towel over his head and that was it," Snyder said.

Gobert's injury had forced Derrick Favors, who was limited all season due to a bone bruise in his left knee, into the starting center role.

Gobert averaged 14.0 points, 12.8 rebounds and a league-high 2.6 blocks per game during the regular season.