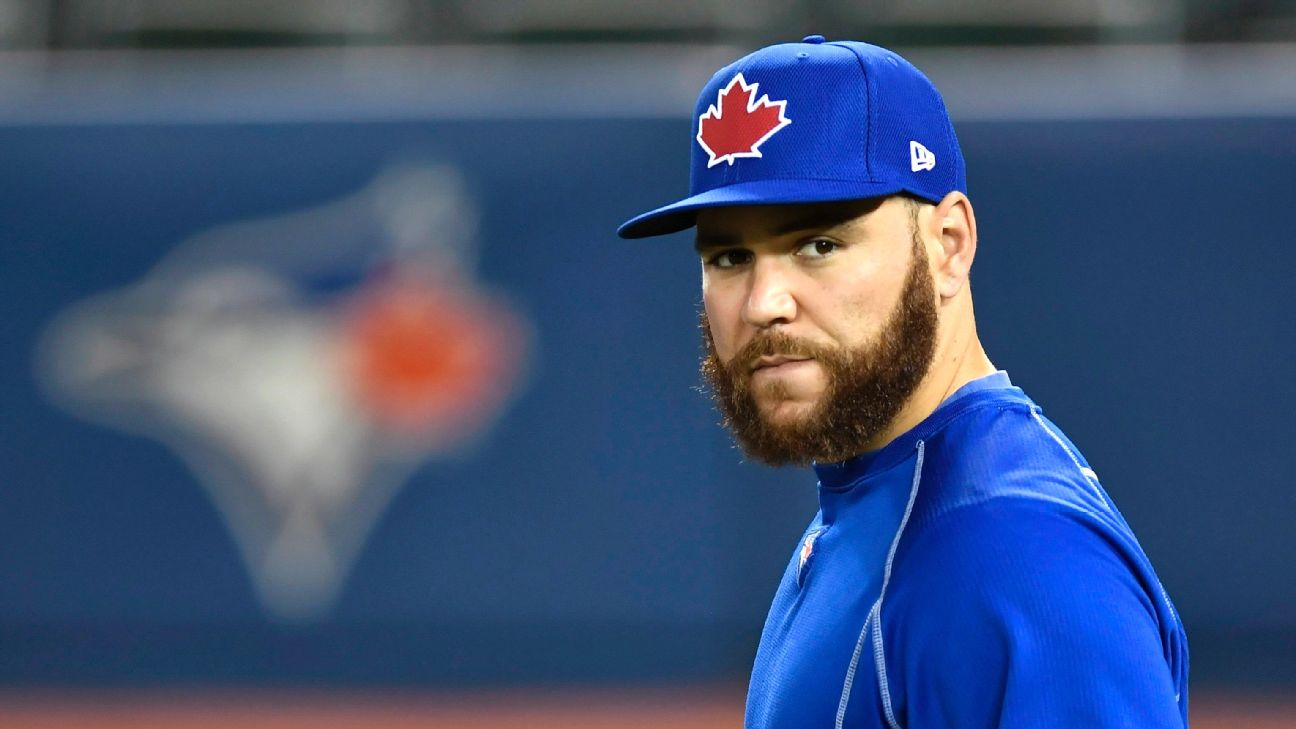 LOS ANGELES -- Russell Martin left the Los Angeles Dodgers with basically his entire career in front of him, not long removed from a Gold Glove Award, a Silver Slugger, and back-to-back appearances in the All-Star Game.

He returns with his career on the brink.

"It's a big year for me," Martin, a month away from his 36th birthday, said during a conference call with the L.A. media. "I need to have a good year or else nobody's going to want to have me. It's really simple."

The Dodgers re-acquired Martin in a trade with the Toronto Blue Jays earlier Friday, providing themselves with a veteran stopgap behind the plate until their talented prospects are ready for the major leagues.

Martin is owed $20 million in the final year of his contract, but the Blue Jays will cover $16.4 million through cash considerations in the trade. In exchange, the Dodgers relinquished a couple of relatively undistinguished minor leaguers in starting pitcher Andrew Sopko and shortstop Ronny Brito.

Martin now joins Austin Barnes in what appears to be a tandem behind the plate, keeping the position warm for either Keibert Ruiz or Will Smith, both of whom seem bound for Triple-A. Martin, who began his career with the Dodgers from 2006 to 2010, has reached base 34 percent of the time over the past two years and has ranked within the top 9 percent in pitch-framing during that span, according to ESPN metrics.

"There's something about putting on that Dodger uniform that can bring out some magic in you, and hopefully I can get some of that magic this year," Martin said, alluding to Matt Kemp, who returned to the Dodgers last season and put together a spectacular first half. "But I just want to be part of it. I know that the team's great. I just want to be a part of it and just win, really."

The Dodgers have lost back-to-back World Series and haven't necessarily improved yet this offseason, though they did shore up the eighth inning with the addition ofJoe Kelly. Kemp, Yasiel Puig and Alex Wood were sent to the Cincinnati Reds in a move to shed salary. And Martin is currently a downgrade from new Milwaukee Brewers catcher Yasmani Grandal, who, despite his infamous postseason shortcomings with Los Angeles, is one of the best hitters and pitch-framers at his position.

But the Dodgers still have time and room to make major moves. They have something in the neighborhood of $15 million under the 2019 luxury-tax threshold and more cost certainty after avoiding arbitration with all seven of their eligible players (outfielder Joc Pederson, shortstop Corey Seager, relievers Pedro Baez, Josh Fields and Yimi Garcia, and utility players Enrique Hernandez and Chris Taylor).

The Dodgers could still trade for Miami Marlins catcher J.T. Realmuto, but they're now covered in case the asking price remains exorbitant. They can use what is still a deep 40-man roster and farm system to acquire a top-of-the-rotation starter like Cleveland Indians ace Corey Kluber. And if ownership agrees to exceed the $206 million threshold, they can also make a serious run at free-agent outfielder Bryce Harper.

"Our focus is still and will always be on how we can continue to improve and make ourselves better," Dodgers president of baseball operations Andrew Friedman said on a conference call. "That remains our mindset in every aspect."

Martin, a four-time All-Star and .249/.349/.399 career hitter, has been to the postseason in nine of his 13 seasons. His 1,519 games behind the plate ranks third among active catchers, behind only Yadier Molina and Brian McCann. Martin, who can also play third base, threw out a league-best 44 percent of would-be base-stealers in 2015, but only 17.4 percent over the next three seasons (7 percentage points below average).

Martin was working out at the Blue Jays' facility in Dunedin, Florida, when he was told about the trade.

He said he was "super excited" to be back.