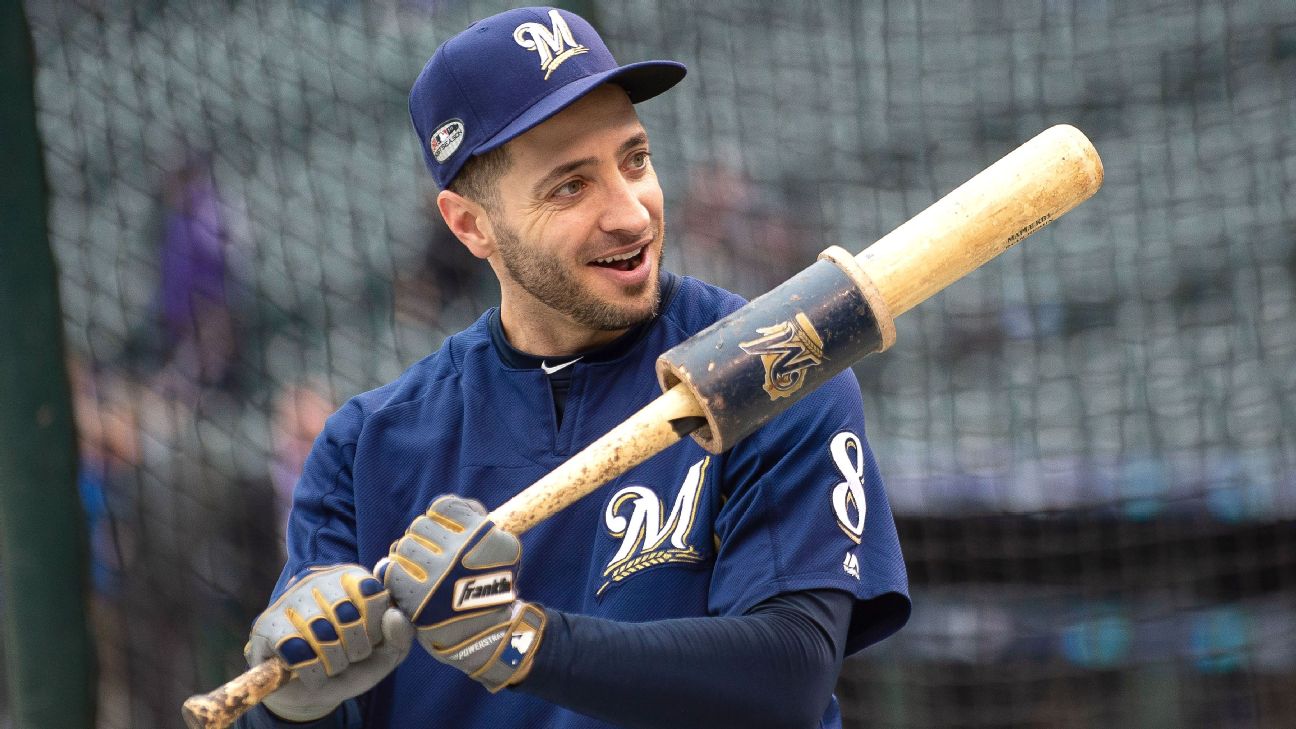 Here's a stupid and obvious thing to say at the start of an article: Two teams are more interesting than one. We could test the Dodgers against an anthropomorphized algorithm, and we could have the Brewers play a simulated opponent in a virtual space, and theoretically these controlled settings would tell us more precisely how good each team actually is. But two teams are more fun. Duh.

Part of the reason is history. Put any two clubs together on top of 140 years of major league baseball records and you're going to find a few dozen places where they bumped into each other and walked away from the encounters slightly changed. The Red Sox and Astros are about to play a league championship series that isn't just Chris Sale vs. Jose Altuve. It recalls Jeff Bagwell vs. Larry Andersen, and young Roger Clemens vs. old Roger Clemens, and, for that matter, 2017 Chris Sale against 2017 Jose Altuve, when Altuve homered three times (twice off Sale) to start the Astros' championship push. It's a series between the two teams that the 1986 Mets vanquished. It's a series between the team that gave up on J.D. Martinez and the team that committed $110 million to him. It's the Marwin Gonzalez family reunion.

By contrast, the Brewers and Dodgers have managed, for two guys at the same small party, to stay mostly on separate sides of the room -- friends of friends but not exactly friends, nor really enemies. They've never faced each other in the postseason. They were in separate leagues until the 1990s, so they haven't even faced each other that much in the regular season. They've never really swung a trade of any importance -- the last trade, period, (Vinny Rottino for Jason Vargas) was almost a decade ago. No major star has split his career between the Brewers and the Dodgers: Only two players have hit 50 home runs for each franchise, and neither of the two (Greg Brock and Gary Sheffield) is in either club's Hall of Legends. No pitcher has won 30 games, or saved more than 10, for both franchises. They've never played a marathon game against each other, or -- near as I can tell from an incomplete investigation -- been in a brawl against each other.

The exception that proves the rule, though, is the trade that these teams didn't make. And so, henceforth, this NLCS shall be known as:

Let's travel back in time 23 months, when Jerry Crasnick released his annual hot-stove survey of industry executives. One of his questions that year was this:

What's the most likely scenario: (1) Ryan Braun gets traded; (2) Yasiel Puig gets traded; or (3) they get traded for each other?

Note that "neither gets traded" isn't an option, which puts you in the mindset of the league at that point: It was unthinkable that each player would remain with his current team. Inertia was the one option not worth considering. Furthermore, nine out of 31 execs who answered chose No. 3, believing that it was more likely that Yasiel Puig would be traded for Ryan Braun than that he would be traded for literally any other human being.

Puig was at his lowest point as a Dodger. He was less than two years removed from finishing 19th in MVP voting as a 23-year-old, he was under a team-friendly contract, and yet had played poorly enough that the Dodgers were shopping him at the July trade deadline. When no trade was completed -- and after right fielder Josh Reddick was acquired -- Puig was demoted to Triple-A Oklahoma City midsummer.

"We have to concern ourselves with the whole team," manager Dave Roberts said, making it clear that Puig was an obstacle. General manager Farhan Zaidi, asked to handicap the chances of Puig ever playing for the Dodgers again, declined. "It's certainly a possibility," he said -- and that was before Puig posted Snapchat stories of himself and his teammates drinking on a party bus, causing an official Dodgers statement expressing "disappointment" in him. They placed him on revocable waivers in August and, only after some debate, recalled him in September, whereupon he had his best month of the season. Still, he was used mostly off the bench in the 2016 postseason.

Braun, by contrast, had largely rehabilitated his career, three full seasons after he was suspended 65 games for violating the league's drug-prevention program. He had steadily improved each season following the suspension, and his 2016 season -- a .305/.365/.538 line, 4.4 WAR, mentioned at the bottom of a couple of MVP ballots -- wouldn't have looked out of place in his normal, pre-suspension aging curve.

He was still booed at Dodger Stadium, where fans might never forgive him for beating out Matt Kemp for the (now-tainted) MVP award in 2011. But where every article in 2014 had referred to him as "disgraced outfielder Ryan Braun," by 2016 they were back to saying "star outfielder Ryan Braun." His contract -- four years and $76 million remaining -- was no longer a burden, though his limited no-trade protection would become full no-trade rights in early 2017.

He also was somewhat out of place on the Brewers roster. In 2016, Braun was paid as much as the next five highest-paid Brewers combined; the Brewers would soon be entering a competitive window, but most forecasts saw them competing in earnest in 2018 or later.

So a trade -- the veteran star for the young reclamation project -- made sense. And a trade almost came together. In August, while Puig was in Oklahoma City, and the Dodgers put him on revocable waivers, the Brewers reportedly claimed him. Adam McCalvy wrote for MLB.com:

According to a source, one scenario would have netted the Brewers Puig and two prospects along with pitcher Brandon McCarthy, whose departing contract would have helped offset the Dodgers' luxury tax hit for adding Braun. The source said Braun remained at Miller Park with some teammates after the Brewers' Aug. 31 game against the Pirates while the Brewers and Dodgers continued talks up to 11:59 p.m. ET -- a minute before the trade deadline to acquire players and have them eligible for the postseason. In the end, they simply ran out of time.

USA Today's Bob Nightengale said the trade had been "about 20 minutes" from completion, and that an offseason swap was not just possible but "likely."

And then -- poof. It all just didn't happen. Each team made it through the winter intact, and pretty much as soon as a new season started all the details that made a trade so perfect begin to morph. The fits don't fit so snugly. Puig got off to a hot start. The Brewers did too. Braun got hurt. Then Puig had a big postseason. Then the Brewers got Christian Yelich and Lorenzo Cain last winter. And the Dodgers got under the luxury tax threshold. And both teams won their divisions this year. And each won their division series. All of it brought us right here, and -- as the saying goes -- the best trade for each was the one they didn't make.

Is that true? You could do the accounting and make some sort of judgment, if you wished to. Puig has outplayed Braun since the nontrade, and he's now younger, less expensive, better and surrounded by whichever two unknown prospects the Dodgers didn't trade to Milwaukee in whatever move they discussed. So maybe the Dodgers "won" the nontrade. But there really is something to be said for what each team did on Aug. 31, 2016, when they haggled just enough over the fifth name in the deal to let it lapse.

The Dodgers had a player who was seen as entirely, 100 percent burnt in Los Angeles -- too erratic, too excessive and no longer the physical force he'd been as a rookie. Prophesying his revitalization in a clubhouse where he was so disliked -- his trade had, reportedly, been called for by Clayton Kershaw(something Andrew Friedman denied)-- defied the powers of our imaginations. But the Dodgers believed in him just enough to haggle over the second prospect. They were rewarded. Puig is good again.

But they believed in their immediate chances just enough to haggle over the second prospect. They were right. They nearly made the playoffs last year, with Braun; and this year they might win the whole thing.