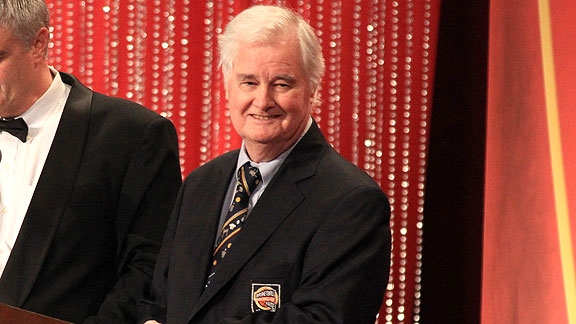 After Basketball Hall of Famer and legendary assistant coach Fred "Tex" Winter died Wednesday at the age of 96, former Chicago Bulls star Scottie Pippen took to Twitter to pay tribute to the man who helped Pippen and the Bulls win six titles in the 1990s.

Shaquille O'Neal, who won three titles with Winter when the coach served on the staff of the Los Angeles Lakers, echoed Pippen's sentiments, telling reporters at the Lakers game against the Warriors that his teams wouldn't have won championships without Winter.

"Tex was one of two old people that took me to that next level," O'Neal said. "Him and a guy by the name of Bill Bertka had a tremendous knowledge of the game. I'm kind of at a loss for words. He meant a lot to my career. I definitely wouldn't have three [championships in L.A.] without him and Bill Bertka."

O'Neal's Lakers teammate Kobe Bryant also reacted to the news of Winter's death. Bryant had cited Winter as a key influence on his ESPN+ basketball breakdown series "Detail", and reiterated that Wednesday night.