Shaq's rivalries continue to soften over time after statue unveiling

We received this lesson in temporal qualities (in addition to an unexpected history of statues) at the unveiling of Shaquille O'Neal's dunking likeness at Staples Center on Friday, an affair that had Shaq and Kobe Bryant sharing the stage and exchanging compliments, a ceremony that officially fused the once-wayward center to the Los Angeles Lakers.

As dominant as Shaq's run in Lakerland was -- with three championships, three NBA Finals Most Valuable Player awards and the lone regular-season MVP of his career -- this honor seemed far from inevitable after the Great Laker Breakup of 2004. The Shaq-and-Kobe feud had reach irreconcilable status, with Phil Jackson offering behind-the-scenes details in his book, leading the Lakers to trade Shaq to the Miami Heat and dispatch Jackson. O'Neal spent the next couple of years in Miami mocking the Lakers and owner Jerry Buss at every opportunity as they floundered while he won another championship.

But the reconstruction began the day he retired, in June 2011, with Buss offering a congratulatory phone call that caught Shaq off guard. He emerged from a room in his house in disbelief, his agent recalled Friday. Shaq was at his home in Florida. But he was on his way back into the heart of Lakerland.

Shaq was more comfortable in his giant skin than any other NBA big man, but the flip side of that was he wanted to be liked. He would joke, but he wasn't happy unless he got the immediate feedback of hearing people laugh at his jokes. He'd keep mental notes at who was standing around his locker and who would leave to head over to Kobe's. And he wanted his jersey retired in L.A. It was something he talked about since his arrival in L.A. and something he found himself still wondering about during a conversation in the Staples Center visitor's locker room while he was playing for the Phoenix Suns.

The jersey went up in Staples Center with the blessing of Buss while he was still alive. Shaq was back. He was one of the many former teammates on hand for Bryant's final game last April.

And then came the once-unimaginable image of Kobe and Shaq, laughing it up and hugging it out, sitting next to each other as they waited for the statue unveiling. Kareem Abdul-Jabbar joked that the odds of that happening were the same as Shaq making a free throw.

Kareem went through the history of statues, mentioning such classics as Michelangelo's David and the Lincoln Memorial, all as a way of lauding Shaq as "the kind of generous man that we all have been building statues to for 30,000 years."

Jerry West called him "the player I most enjoyed when I was with him."

Kobe brought it back to the playing days, calling Shaq "the most dominant player I've ever seen."

I asked Kobe, in his new role as storyteller, what he thought of this tale of reconciliation that led to this giant dunking statue. He thought that it might be a reach.

"I don't think there was ever gonna be a doubt," Kobe said. "S---. He won three championships here. What else you gonna do?"

Jeanie Buss said this was set in motion from the day they broke ground on Staples Center, and Shaq said it would be a good idea to have statues outside it one day.

"I always liked to look ahead," Shaq said. "That was one of the ways that always motivated me, was looking ahead. I understand business and all that. I was there when they did all the renderings, and the boom and the bam. They did the groundbreaking, and I knew how it was going to look and where everything was going to be, the locker rooms and all that. It would be nice if we could put some statues out here. And it all came true."

In the process, the bickering melted away.

Reconciliation was in the air. Jackson, his rift with Kobe long ago mended by winning two more championships together, sharing the stage with former fiancé Jeanie Buss. They walked off to the reception together. The litigious Jim and Johnny Buss, for now on the outs, were conspicuously absent from the gathering of Jeanie's siblings in the second row. Maybe it won't be a permanent ban. Friday made it feel like anything is possible.

There was Shaq's former agent, Leonard Armato, and current agent Perry Rogers standing next to each other. Armato even brought his family up to a private room to visit with Shaq later on.

"My old agent, but still a friend," is how Shaq referred to Armato during his speech.

In the audience was Alonzo Mourning. They entered the league as rivals in the 1992 draft class, when Shaq went first and Zo went second. Shaq used Zo as his financial measuring stick during free agency in 1996: "If a Beamer costs $32,000, a Benz costs $39,000," is how Shaq put it back then. Then they wound up as teammates and won a championship together in 2006 ... and then Shaq invited Mourning to his statue unveiling, the only non-Laker in the audience.

"We were two young alpha males, really just wanting to mark our territory," Mourning said of their early years in the NBA. "Just through competition over the years, we developed a strong respect for one another where, when we stepped on the court, we competed heavily against each other. Ironically enough, we ended up being teammates, and the basketball gods created an amazing atmosphere for us to come together, and a special thing happened." 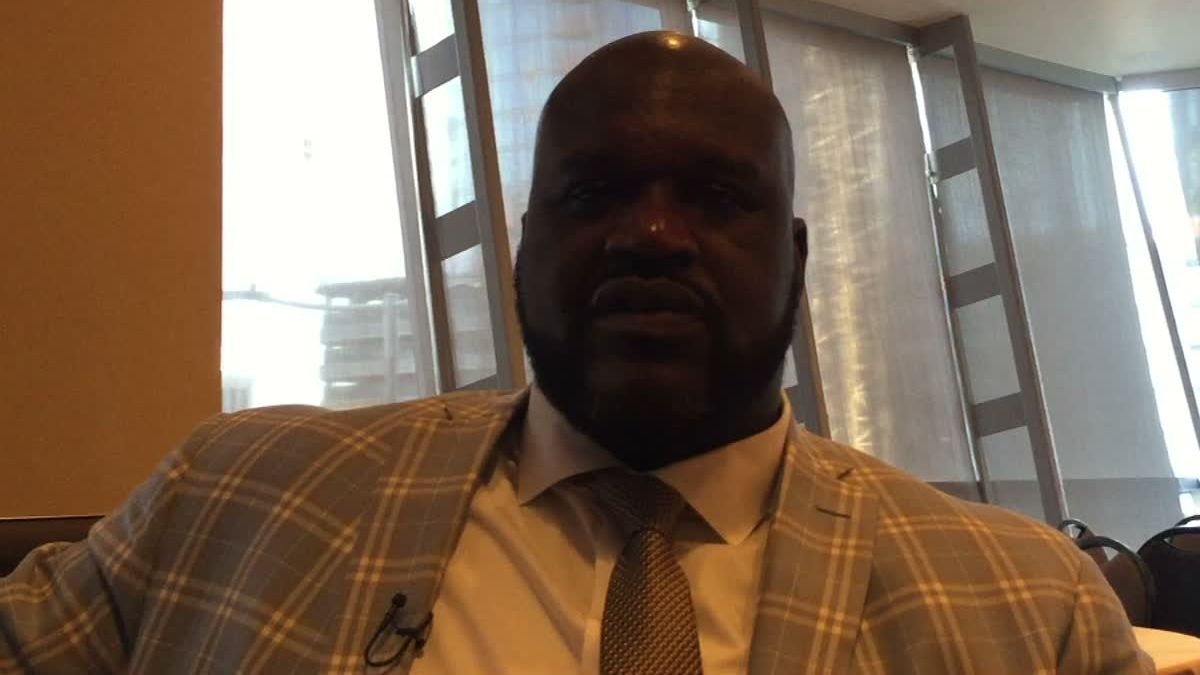