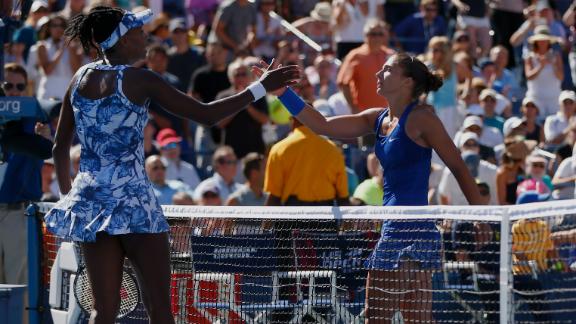 NEW YORK -- Maria Sharapova reached the US Open's fourth round by taking five of the last six games after her opponent, Sabine Lisicki, was warned by the chair umpire about receiving coaching help.

Avoiding the sort of surprise that saw half of the top eight seeded women lose already, No. 5 Sharapova eliminated No. 26 Lisicki 6-2, 6-4 in a hard-hitting match that began Friday night and ended past midnight Saturday.

"A very aggressive, big server," said Sharapova, who will play 2009 U.S. Open finalist Caroline Wozniacki for a spot in the quarterfinals. "I just tried to concentrate on my return. I wasn't serving as well as I wanted to."

Five-time major champion Sharapova trailed 3-1 in the second set. But she turned things around as Lisicki went back and forth with chair umpire Carlos Ramos over whether she was getting instructions from her entourage.

Still, Sharapova did not wrap things up easily. She got broken while serving for the victory at 5-3, then needed three match points to close it.

"She's a very dangerous and tricky opponent, and she's capable of playing really well at the Slams and always raising her level against the top players," Sharapova said. "That was something I was very well aware of. I thought I stepped up to the challenge."

The point of the match came with Lisicki serving and already ahead 2-1 in the second set. She raced this way and that along the baseline, scrambling for a forehand retrieval, then to the other side for a backhand to extend the point, before returning to her forehand side for a desperation defensive lob.

Eschewing an overhead, Sharapova let the ball drop but badly missed a forehand that landed way out.

That saved a break point and Lisicki held to go ahead 3-1.

But that's when Ramos was beginning to engage Lisicki in a discussion about whether her coach was sending her signals.

"I didn't know what he meant," Lisicki said. "I didn't see anything. I wanted to know what it was that he saw, because I haven't seen it."

In WTA tournaments, coaches are allowed to head down to the court between games and help players during matches. But coaches are not allowed to give tips to their players in Grand Slam matches.

"Let's talk at the changeover," Ramos told Lisicki, and when she sat on the sideline at 3-2 in the second set, the conversation resumed.

He suggested to Lisicki that she tell the folks in her guest box not to offer suggestions.

Before serving in the next game, Lisicki wandered toward the stands, carrying balls on her racket, and said something toward her group, then shrugged her shoulders.

Moments later, on break point, Lisicki sailed a swinging forehand volley well out, allowing Sharapova to pull even at 3-all.

Asked at her news conference what she told her group before that game, Lisicki said: "That he thought they were coaching, just so they were aware."

Errani wagged her finger and cupped her hand to her ear for the US Open fans who tried to will Williams to victory.

"I think I will remember forever that moment," Errani said.

Two points from defeat, the diminutive Italian rallied to force a third-set tiebreaker and outlasted Williams in a match that was both lopsided and tight.

Williams twice came back from down a break in the third but was done in by too many unforced errors -- she had 52 in the match.

Errani, seeded 13th, next faces 121st-ranked qualifier Mirjana Lucic-Baroni, who stunned second-seeded Simona Halep 7-6 (6), 6-2. The 32-year-old Lucic-Baroni hasn't made a Grand Slam round of 16 since 1999, waylaid by injuries and financial struggles.

Halep, the French Open runner-up and Wimbledon semifinalist, had three set points in the first while ahead 5-2, before collapsing. When that lead slipped away, Halep said, "I wasn't in a good mood."

Trying to close out the match at 5-3 in the third set, the 19th-seeded Williams had one of her eight double faults.

Errani won just 12 games in three previous meetings with Williams. But in the first set, Williams couldn't take advantage of her power, making just 30 percent of her first serves.

Errani used her quickness to run Williams around the court, and the 34-year-old looked sluggish after playing a long doubles match with her sister Thursday night.

"Even if I won the first set 6-love, she's an amazing player," Errani said in an on-court interview.

And in the second, Williams indeed looked like the seven-time major champion she is, pouncing on Errani's soft serves.

Errani just had a little more left in the final set.

"I was ready to just fight," said Errani, who wasn't thrilled with fans yelling out support for her opponent during her serves.

Williams had four more unforced errors in the tiebreaker. And Errani's quick reflexes, honed in doubles, gave her match point when she stabbed a backhand volley to return what looked like a sure winner by Williams.

"Unbelievable," Errani said. "If I don't do that, maybe I lose."

Williams is 34, dealing with an autoimmune disease, and hasn't been to the fourth round at a major since 2011. She also played a doubles match Thursday with her sister Serena that lasted about 2½ hours and finished shortly before 8 p.m.

"I guess the schedule definitely wasn't ideal," Williams said. "It was just such a late match."

After losing to Errani, Williams went on court again for doubles and won that one, although she was treated by a trainer.

Williams did not blame injury or fatigue for the way she failed to close out Errani, including getting broken while serving at 5-3 in the third.

"I went for too much," explained Williams, 3-0 against Errani until Friday.

"She just played one of the best matches of her life," Williams added.

Errani reached the final at the French Open and the semis at the US Open in 2012, but both times she was routed by power players: Maria Sharapova and Serena Williams.

Errani is listed at 5-foot-4½ -- 8½ inches shorter than Williams -- and truly, there is just as big a disparity in their serving. Errani's top speed Friday was 88 mph, about 30 mph slower than Williams. Errani's second serves were in the low 60s mph, but she got 86 percent of her first serves in.

"I know (people) say my serve is terrible, but it helped me get to where I've been," Errani said. "It's not easy to improve it. It's definitely one of my weak points, but today it helped me."

Her next opponent will be another surprise winner: 32-year-old qualifier Mirjana Lucic-Baroni of Croatia, who eliminated No. 2-seeded Simona Halep of Romania 7-6 (6), 6-2. Lucic-Baroni hadn't reached the fourth round at a major since getting to Wimbledon's semifinals in 1999.

Half of the top eight seeded women already are out, with Halep joining No. 6 Angelique Kerber (beaten 6-1, 7-5 Friday by 17-year-old Belinda Bencic of Switzerland), and earlier losers No. 4 Agnieszka Radwanska and No. 8 Ana Ivanovic.

Swiss teen Belinda Bencic, 17, is coached by Martina Hingis' mother, Melanie Molitor, and was coming off a third-round showing at Wimbledon.

"I started believing that I can play with these players," Bencic said.

The Chinese veteran had gone two years without making it past the second round at a major tournament before her Wimbledon run this summer. But she didn't meet any seeded players in the first three rounds there before losing to eventual champion Petra Kvitova in straight sets.

She'll have the momentum of two straight sharp performances. With third-ranked Li Na sidelined by a knee injury, Peng's success is giving the fans in China something to cheer.

The 31-year-old Vinci had made the quarterfinals at the US Open the last two years but lost in the opening round at the first three major tournaments of 2014.

Ninth-seeded Jelena Jankovic advanced by routing Johanna Larsson 6-1, 6-0. The 96th-ranked Larsson had upset Sloane Stephens in the second round.

Errani Into Fourth Round
Sara Errani beat Venus Williams 6-0, 0-6, 7-6 to advance to the fourth round of the US Open.

Evert On Venus' Loss
Chrissie Evert discusses what went wrong for Venus Williams during her third-round loss to Sara Errani at the US Open and what Evert expects from Williams going forward.

espnW's Star Of The Day: US Open Day 5
Jane McManus explains why Mirjana Lucic-Baroni is your espnW star of the day.

Peng On Second Upset Of Tournament
Peng Shuai discusses her third-round win over Roberta Vinci and how much making it into the second week at the US Open means to her.