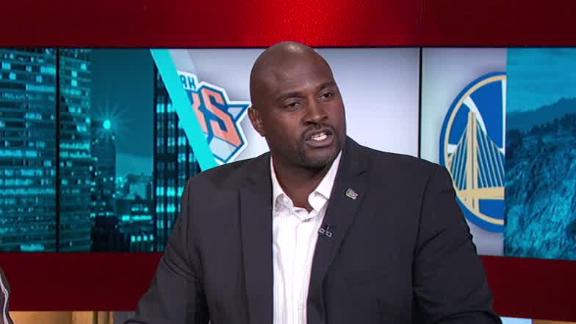 Sources say theLos Angeles Clippers, meanwhile, regard the threat of San Antonio signing away Paul as a legitimate concern, even though the Spurs, at present, have virtually no salary-cap flexibility.

The depth San Antonio would have to sacrifice to afford a top-dollar offer for Paul undeniably poses a challenge to Spurs management. But the prospect of adding Paul to the frontcourt duo of Kawhi Leonard and LaMarcus Aldridge could potentially create a star trio that closes the gap on the Golden State Warriors, who capitalized on an ankle injury Leonard aggravated in Game 1 of the Western Conference finals and went on to complete a 4-0 series sweep of Gregg Popovich and his 61-win team.

The Clippers are widely regarded as strong favorites to retain both Paul and fellow free agent-to-be Blake Griffin when they hit the open market July 1, given their financial advantages over competing teams in trying to sign them. But the Clippers' nagging inability to dodge injuries and reach the conference finals even once in Paul's five seasons there has given interested suitors such as San Antonio hope that he will strongly consider external interest.

The Clippers will enter free agency knowing they can outbid any suitor for Paul. At 32, Paul is eligible for a five-year deal worth an estimated $205 million from Clippers owner Steve Ballmer this summer, thanks in part to rule changes in the NBA's most recent labor pact that are more favorable to stars in Paul's age bracket.

The most the Spurs can offer, by contrast, is a four-year pact worth just over $152 million, but it appears San Antonio would have to make a number of roster moves to create the needed cap space to offer a max deal to Paul.

Even if the Spurs renounce the rights to looming free agents Manu Ginobili, Patty Mills and Jonathon Simmons as well as potential free agents Dewayne Dedmon and David Lee, they would still face complicated decisions on San Antonio mainstay Tony Parker and possibly both Pau Gasol and Danny Green.

It is unclear how soon Parker, 35, will be able to play again after suffering a ruptured quadriceps tendon in his left leg during the second round of the playoffs. Releasing Parker via the waive-and-stretch provision or trying to trade him are among the unfriendly options San Antonio would be forced to consider to create the requisite cap space for a run at Paul and presumably any other top free-agent guard, such as Jrue Holiday, Kyle Lowry or former Spur George Hill.

The Spurs' cap picture would look decidedly more favorable if former All-Star big man Gasol decides to decline his $16.2 million player option for next season. But if Gasol opts to play out his current contract, San Antonio would probably have to explore the trade market for Gasol and/or Green, depending on what happens with Parker and the team's other free agents.

Another option for San Antonio is exploring the trade market for Aldridge after he had an up-and-down season. San Antonio's free-agent prize from the summer of 2015, Aldridge has the face-up skills offensively that appear to mesh well with Paul's pick-and-roll prowess.

The Spurs and Clippers would also naturally have the ability to engage in sign-and-trade talks if Paul were to decide he wants to continue his career in South Texas as opposed to Hollywood. Yet it should be noted that Paul, in a sign-and-trade scenario, could not get the five-year, $205 million deal; such a swap would merely allow San Antonio to clear cap space by sending assets back to the Clippers in exchange for Paul.