Takeaways from Stanley Cup playoffs Game 1s, and what it means for the rest of the first round 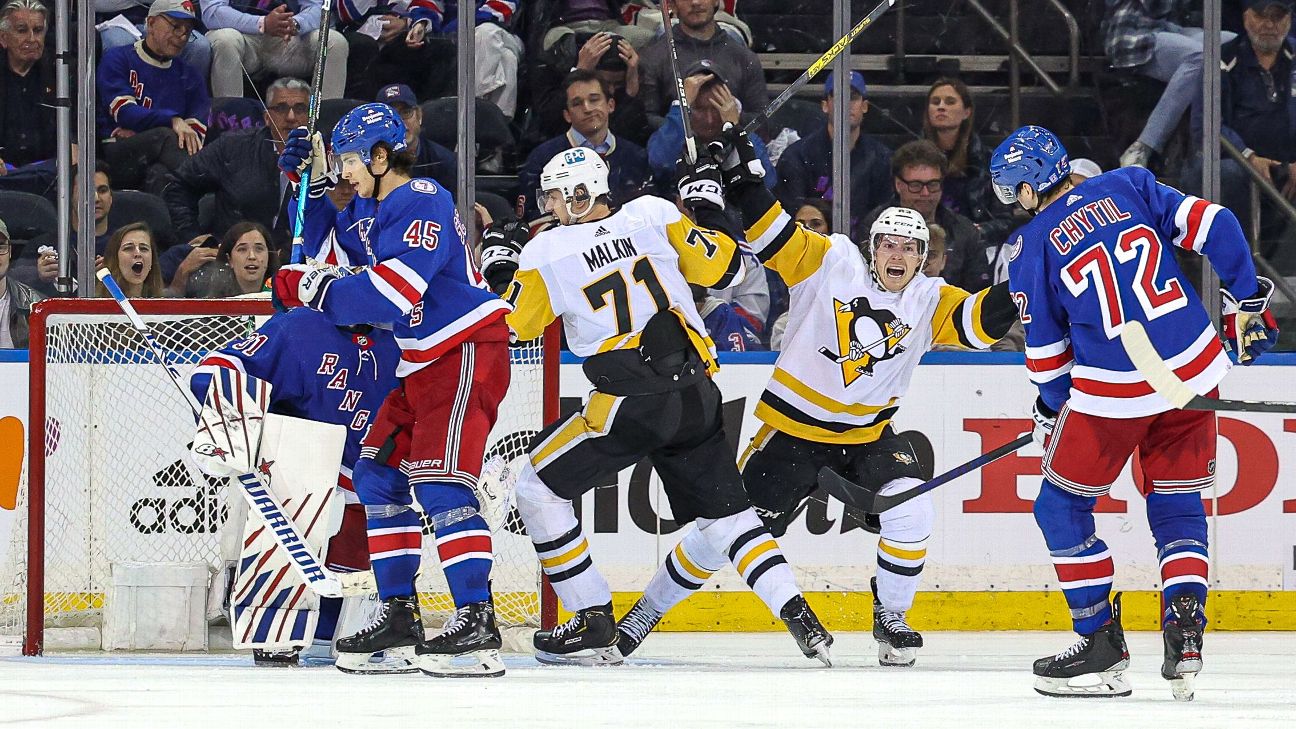 The 2022 Stanley Cup playoffs are off to a wild start, including a triple-overtime thriller, two fights in one game, multiple upsets ... and also multiple blowouts.

After seeing the postseason version of all 16 playoff teams once, what are the key takeaways? And how does it all help us predict what will happen in Game 2 and beyond?


Here is what we identified as the eight most important themes to follow after the games of Monday and Tuesday:

Ranking the top 50 players in the playoffs

It was only three years ago that the NHL's top-seededTampa Bay Lightning were swept out of the first round by Columbus. These things do happen. Is that Florida's fate?

The Panthers' Game 1 performance against Washington was underwhelming, especially considering Florida led the Capitals 2-1 going into the third. In the regular season, the Panthers dominated as the league's top-scoring team and posted only 15 games with two goals or fewer. Offense is their superpower. Now the Panthers have dropped yet another Game 1 to continue a franchise trend that dates to 1997. Is that a bad omen of what's to come? Or was Game 1 just a blip on the radar that's easily rectified with a return to regular-season form in Game 2? The Panthers don't have an illustrious playoff history to lean on, but they'll be anxious to prove come Thursday that the past few months were no fluke. -- Shilton

Pittsburgh Penguins captain Sidney Crosby has spoken openly about the possibility that this is the last Stanley Cup run for the core of his team, one that won two consecutive Cups in 2016 and 2017. Evgeni Malkin, Kris Letang and Bryan Rust are among the team's unrestricted free agents this summer, the first offseason under the Penguins' new ownership.

The 34-year-old star played like he didn't want the ride to end in Game 1 against the Rangers, dishing two incredible passes to set up Jake Guentzel goals that erased a 2-0 Rangers lead. So did Malkin. He earned the primary assist on a pinpoint power-play goal that started with Letang and ended with Rust. At 5:58 of triple overtime, he ended the game by tipping the 83rd shot the Penguins took on Igor Shesterkin for the game winner and the 1-0 series lead. "I'm not thinking right now about my contract. It's time to have fun and play games," Malkin said. -- Wyshynski

Toronto's reward for a franchise-record 115-point regular season was a first-round Stanley Cup playoffs matchup against the two-time reigning Stanley Cup champion Lightning. Tough break for the Leafs? Not in Game 1. Toronto dominated Tampa Bay early from the start of its 5-0 victory. The Leafs' five-minute penalty kill in the first period was a clinic of efficiency, and their offensive game only took off from there.

Auston Matthews scored twice. Mitch Marner busted an 18-playoff game goalless drought. Goaltender Jack Campbell was terrific, posting a 23-save shutout. The Lightning, meanwhile, looked out of sync, out of sorts and downright defeated by the time both sides were exchanging blows midway through the third. There's plenty of runway left in this series, but Toronto sent a message that it won't be intimidated by Tampa Bay's recent pedigree.And Toronto could only be feeling stronger for Game 2 Wednesday as Michael Bunting eyes a return to the top line with Matthews and Marner. -- Shilton

Igor Shesterkin's Game 1 performance can't be added to his Vezina Trophy candidate case -- those ballots were submitted by general managers at the end of the regular season, and the Rangers goalie's name is expected to be atop most of them. But what Shesterkin did for the Rangers in their triple-overtime loss to the Penguins was nothing short of remarkable: 79 saves, the second-most in a Stanley Cup playoffs game. He was closing in on Columbus goalie Joonas Korpisalo's 2020 record of 85 saves when Evgeni Malkin scored in the third extra session on the Penguins' 83rd shot of the game.

Shesterkin was brilliant, especially against a Pittsburgh team that really found its stride at 5-on-5 after the first period. New York owes him a win for that effort. One path to victory in Game 2: Hope to draw more than one penalty, as the Rangers' elite power play converted their lone chance against Pittsburgh. -- Wyshynski

An Antti Raanta show-stopper in his first-ever NHL postseason game? Vitek Vanecek holding the high-flying Florida Panthers at bay for the Washington Capitals? How aboutDavid Perron scoring his first-ever career playoff hat trick against Vezina Trophy winner Marc-Andre Fleury? Ville Husso buttoning up a 37-save shutout in his NHL playoff debut to boot?

In two lopsided Monday night Game 1 wins, the key performances didn't belong to superstars. Heck, Raanta wouldn't have been backstopping the Hurricanes versus the Bruins if not for an injury to Frederik Andersen. But there he was, helping the Canes earn a 5-1 victory. Meanwhile, Perron had skated in 92 previous playoff tilts and had never hung up three on a netminder, let alone carry his team to a 4-0 win.And on down the list. Postseason hockey is all about unexpected contributors making an impact. That's a trend we can bet on continuing. -- Shilton

While the goals were pouring in for some teams, the St. Louis Blues and Calgary Flames put defensive stamps on their respective series in Game 1.

In shutting out the Minnesota Wild, the Blues shut down the third-highest-scoring home team in the NHL this season (4.10 goals per game). Any concerns about Ville Husso wilting in the postseason spotlight were alleviated. But more than the goalie's performance was the performance in front of him. St. Louis killed six Wild power plays. The Blues found ways to limit the creativity of the Kirill Kaprizov and his line with Mats Zuccarello and Ryan Hartman all night at 5-on-5. In fact, that line didn't generate a single high-danger shot attempt in Game 1. Minnesota will have to make some adjustments to get better even-strength chances and something -- anything -- from their power play.

The Flames, meanwhile, pitched a 1-0 shutout against Dallas in Game 1. Like the Blues, they held the Stars' dynamic top line -- Jason Robertson, Joe Pavelski, Roope Hintz -- without a high-danger shot attempt, and a minus-4 shots-on-goal deficit at 5-on-5. It was a total team effort in controlling that line, as coach Darryl Sutter was confident in throwing any of his lines against them. The Stars were held to 16 shots and Jacob Markstrom -- who had nine shutouts in the regular season -- stopped them all. A strong start for one of the favorites in the West and a game only Darryl Sutter could love -- and he did. -- Wyshynski

The Predators knew going into Game 1 that Juuse Saros wouldn't be available until, at best, Game 3 back in Nashville. That was a less-than-ideal scenario for the wild-card Preds facing top-tier Colorado. The results Tuesday were shockingly abysmal, though. David Rittich got the start and allowed five goals on 13 shots before Connor Ingram came in to replace him -- while there were still nearly five minutes remaining in the first period. Nashville went on to lose 7-2.

There's no guarantee on when Saros will be able to get back, and if Game 1 was any indication, Nashville will need to adjust its game plan moving forward. The Predators had a pair of 40-plus goal scorers in the regular season -- Matt Duchene, who scored both of Nashville's Game 1 goals, and Filip Forsberg -- but they're not going to match the Avalanche in output. Instead of just watching the Avalanche dominate offensively (which the Predators did a lot of in Game 1), Nashville must up the physical intensity of this series to throw Colorado off its game. The Avalanche were cutting through Nashville's defense with ease in Game 1, and if that continues, the Predators will be done within a week. -- Shilton

When the Edmonton Oilers decided to run it back with Mike Smith and Mikko Koskinen as their goalies last offseason, there was widespread criticism. After all, there were more than a few goalies available via trade and free agency last summer. Why not upgrade the spot instead of re-signing Smith to a two-year deal that would take him past his 40th birthday? But then Smith quieted a lot of critics with a nine-game winning streak entering the postseason, where he gave up more than two goals only twice.

He turned into a pumpkin in Game 1 against the Los Angeles Kings. After giving up some specious goals, he committed an unconscionable turnover, passing the puck into the slot to Kings forward Alex Iafallo. Smith made a great save on Iafallo's shot, but eventually Phillip Danault scored the game winner on that sequence.

Will Smith return for Game 2? Coach Jay Woodcroft was noncommittal about his starter. "One puck-handling error. He made a big save off of that error. I think as a team we can do things to help him in that situation," Woodcroft said. "It's a real skill of his. That one play you're referencing is one that he'd like to get back." -- Wyshynski 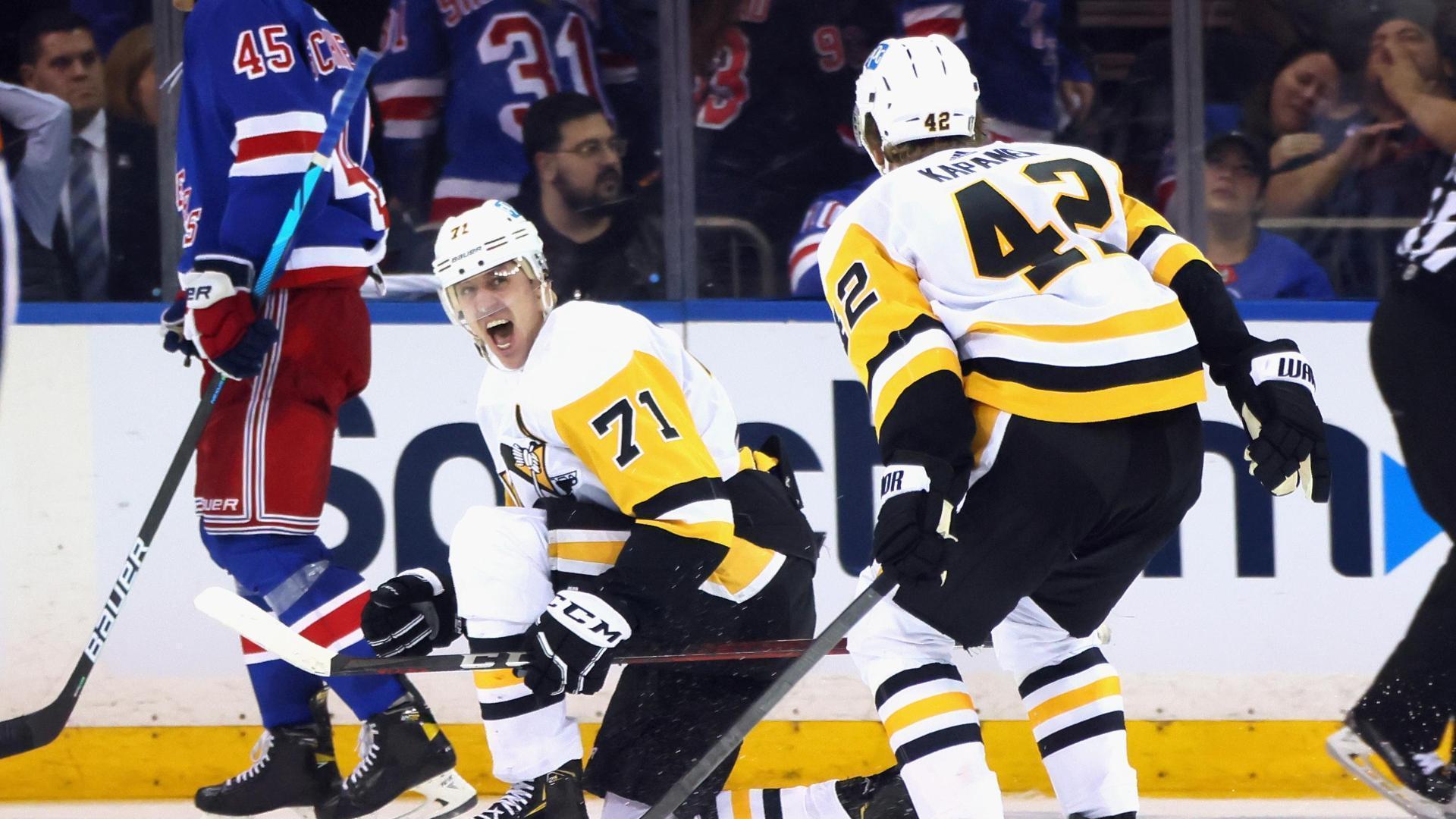