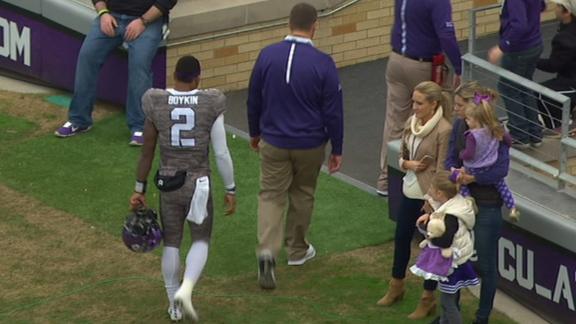 TCUquarterback Trevone Boykin left the Horned Frogs' 23-17 victory over winless Kansasafter injuring his ankle in the first quarter and did not return.

TCU coach Gary Patterson said he was hopeful Boykin could return to action next week againstOklahoma.

"I think Trevone will be back," Patterson said. "We just couldn't take a chance. They said he shouldn't go, and I said, 'OK.'"

Asked whether the ankle was sprained, Patterson said, "I think so."

Boykin, a Heisman Trophy contender, entered the game with 3,373 passing yards, 19 touchdowns and nine interceptions while adding 597 rushing yards and eight touchdowns on the ground.