'The gift and the curse' fueling Chris Paul's competitive fire 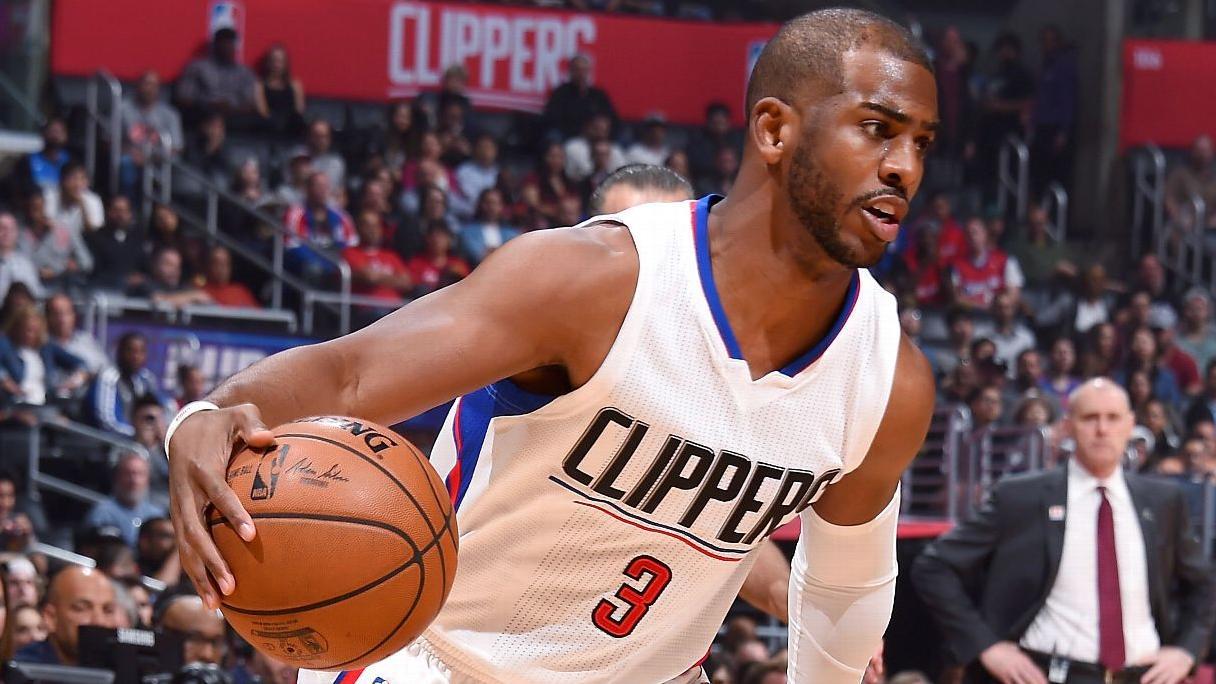 Charles Paul made a makeshift basketball court for his two sons in the basement of their Winston-Salem, North Carolina, home. He used red tape for the lines of the court and put plastic Fisher-Price baskets about 20 feet apart, duct-taping the bases in place and raising older brother C.J.'s hoop a little higher than Chris'.

One day, 5-year-old C.J. stormed down the court and threw down a vicious dunk over his kid brother. Chris attempted to reject the shot but instead got run over, crashing hard to the concrete floor. But the 3-year-old didn't stay down long.

The smaller Paul popped right up and punched his big brother flush in the face, a flash of the fierce competitive fire that still burns strong three decades later, 13 years into little brother's surefire Hall of Fame NBA career.

"That right there told me everything I need to know about him," said Phoenix Suns center Tyson Chandler, who first heard the story from Chris Paul's father when Chandler was teammates with Paul in New Orleans.

That makeup has helped make Paul one of the premier point guards of all time. It has also made the one really glaring omission on his résumé -- failing to advance past the second round of the playoffs -- all the more agonizing for Paul, who will face his former team Monday night for the first time since leaving the LA Clippers to join the Houston Rockets in pursuit of the team success that has so far eluded him.

As David West, another former New Orleans teammate, puts it: Paul is "hell-bent on winning." Paul describes himself as hating to lose more than he loves to win. He demands the same kind of determination and commitment to the game from his teammates, sometimes in a style similar to a drill sergeant, which hasn't always been well received despite Paul's pure intentions.

PJ TUCKER INITIALLY wasn't too impressed when he first saw Paul play. They were 7 or 8 years old then, and Paul was a pipsqueak, not one of the better players among their age group in North Carolina. But something about Paul stuck with Tucker.

"He used to get in the game and was so little, just this fiery little guy that didn't back down, always getting into scuffles and fights with people," said Tucker, who turned down a bigger offer from the Toronto Raptors to sign with the Rockets last summer, in large part because he wanted to play with Paul. "You could just tell back then that he just had that 'it,' that he wasn't going to back down from anybody -- just laid it all out all the time.

"As he got better over the years, he still kept that fiery edge. He's been the exact same person since I met him when we were kids."

It's probably not a coincidence that Paul has always found his way to leadership positions. He was a big-hitting middle linebacker in Pop Warner despite his diminutive physique. He was a heck of a high school quarterback. And he has always been a point guard, a floor general. It's a job Paul takes very seriously -- maybe too seriously sometimes.

C.J. Paul, who hooped at Hampton University and South Carolina-Spartanburg, stopped playing pickup ball with his little brother a decade or so ago. He just wanted to have fun and get some exercise. That wasn't cool with Chris, who would scream at C.J. when he didn't hustle.

Now imagine the standards Paul has for his teammates who are earning big paychecks to play with him.

"You've got to understand that not everybody is going to be as passionate as you are," Clippers guard Austin Rivers said, acknowledging that Paul sometimes rubbed teammates the wrong way.

"Chris is like, 'If you don't have passion for the game, then why bother?' That's just kind of how he works. He just loves the game that much. And I don't mean this as a dis. I mean this as a compliment."

PAUL LAUGHS WHEN he thinks back on the first chapter of his career.

"I was probably bats--- crazy when I was in New Orleans," Paul said. "I know I was. I remember [former Hornets assistant coach] Darrell Walker had a talk with me after one of the games. I look at some of the clips from then, and I was just crazy."

But the Hornets' other young foundation players accepted, even embraced, Paul's hard-charging leadership style. Chandler and West had similarly intense on-court personalities and determination to compete against the established Western Conference powers. Paul instantly earned their respect, as much due to his desire to win as his undeniable talent.

"He's always been an incredible leader. It was in him," Chandler said. "If it's in you like that, you can't hold it back.

"He was getting on guys who weren't making winning plays and not giving winning effort. How can you not respect that? And if you can't respect it, I don't want you on my team anyway."

The Hornets hopped from 18 wins the previous season to 38 during Paul's rookie of the year campaign. Two years later, in 2007-08, Paul was a first-time All-Star who led the Hornets to 56 wins and a first-round gentleman's sweep of the Dallas Mavericks. New Orleans pushed the San Antonio Spurs to seven games in the second round and seemed like a young team on the rise.

New Orleans, a mismanaged, small-market franchise, hasn't won another playoff series since. Chandler was shipped off in a trade after the following season. With the team in decline and financial issues dragging down the franchise, West opted to leave in free agency following the 2011 lockout. Paul couldn't stomach staying with no real hope to win, pushing for a trade and landing with the Clippers after NBA commissioner David Stern infamously vetoed a deal that would have paired Paul with Kobe Bryant in the Los Angeles Lakers' backcourt.

It certainly wasn't a softer, gentler version of Paul that arrived in L.A., where he was known to light into young players who showed up for practice later than him, which typically meant at least two hours early.

Sixth man Jamal Crawford, who joined the Clippers following Paul's first season with the franchise, said he had never encountered such a blunt, barking leader as Paul in the first five stops and 11 seasons of Crawford's NBA career.

"It was almost like a shock, like, 'Whoa!'" Crawford said. "The thing I had to learn about him is that he's very in-your-face, but it's only for the betterment of the team. It's not to embarrass you. It's not for anything else other than the team to be successful. He has no agendas. He has no hidden anything. Once I understood that [during] the first 10 games our first year playing together, I was like, 'Oh, it's not how he says it, it's the message.'

"He's always talking, always communicating. For that, I think it was great for me, personally. I can't speak for everybody else."

Sources cited friction with Paul as one of the primary reasons Jordan seriously considered leaving the Clippers as a free agent in the summer of 2015. Jordan orally committed to the Mavericks only to change his mind and return to the Clippers, with Paul joining a contingent from the franchise that flew to Jordan's Houston home to make sure they kept the big man.

Jordan learned to appreciate Paul's approach. As the years went on, the big man developed his own voice, often barking back, which Paul respected.

"There may be times where we cuss at each other, we go at each other, we have an argument, but we're both arguing for the same thing," said Jordan, who grew close to Paul and still talks to him several times a week.

"I can't speak for anybody else, but for me, I was fine with it."

Some who were with the Clippers consider Paul's approach to have been counterproductive with Griffin. It certainly isn't like they couldn't stand each other, as Paul and Griffin were part of a group that played the card game Guts on team flights. But their personalities -- Paul's fire and Griffin's cool -- sometimes didn't click on the court.

"It wasn't like it was a hate," said Jared Dudley, who played for the Clippers in 2013-14. "It was more where CP is so good and he's so aggressive and Blake is so passive where he's not going to do conflict like that. His conflict would just be by his emotions showing on the floor -- head down, shaking his head more so than call somebody out or, 'Hey, CP, I need that rock!' I think CP respects that more."

Paul scoffs at the suggestion that personalities were a problem with the Clippers. He quickly dismisses the notion that they played a role in the Clippers' relative lack of playoff success, citing injuries as the primary issue. (Griffin suffered a significant injury during the playoffs each of the three times the Clippers made a first-round exit.)

Paul also points the finger at himself. His regrets from his Clippers tenure come from mistakes he made on the court, such as the uncharacteristic clutch meltdown as the Oklahoma City Thunder rallied from a seven-point deficit in the final 49.2 seconds of a pivotal Game 5 in the 2014 Western Conference semifinals.

"Other than that, I loved my time [with the Clippers], but it was time for me to move on."

PAUL PICKED HOUSTON, pushing for a summer trade to the Rockets by informing the Clippers he would opt out of the final season of his contract if a deal didn't happen, because he believed it gave him his best chance to contend for a championship.

He wanted to play with James Harden, a superstar in his prime, and was happy to give up a little control by having the ball in his hands less often. Paul's role has changed, at least when paired with Harden, who is currently recovering from a hamstring strain and remains sidelined.

Despite the change in scenery and scheme, Paul's mentality remains the same.

"I would describe him as a pit bull who is locked on and the jaw will not unlock," Rockets forward Trevor Arizasaid. "He's maybe not as quick to bark at people as much. I think he's learned over time that you can deal with people in different ways, and that's what he's done, but it still hasn't taken away from the fact that he's like a real-live killer on the court."

Paul also wanted to play again with Ariza, a smart, tough role player who was his teammate during Paul's final season in New Orleans. And Paul wanted to play with his childhood pal Tucker, playing a key role in recruiting the rugged forward to the Rockets.

One of Paul's favorite moments this season wasn't a basket or an assist. It wasn't even a defensive stop. It was when he made a mistake -- he wasn't in the proper spot on defense -- and got screamed at by Tucker.

In Tucker, Paul has a kindred competitive spirit. He also has a frequent friendly wagering foe, helping Paul get his competitive fix when he's not on the court.

"Chris will bet you on anything, I don't care what it is," Tucker said. "He'll bet you shooting quarters or who goes to the bathroom the fastest.

"He'll bet you on anything, because he wants to win everything." 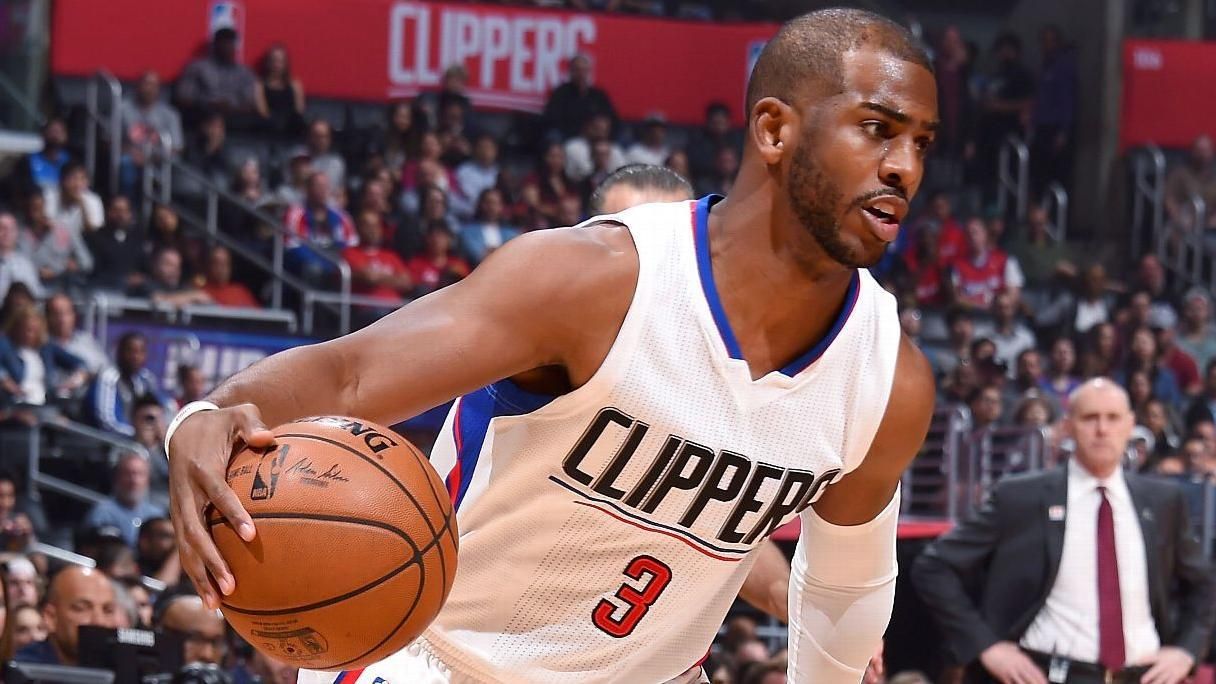 Look back at Paul's highlights from Clippers era
Check out some of Chris Paul's marquee plays from his time with the L.A. Clippers. 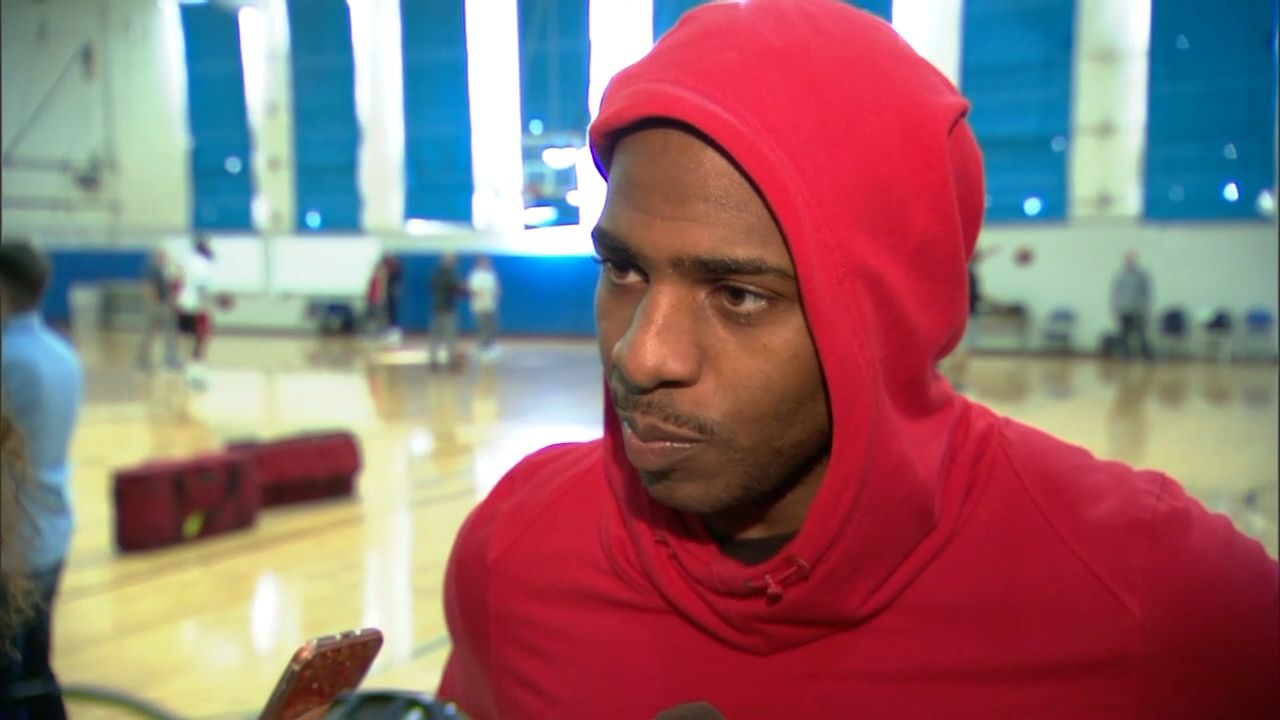 CP3 on L.A.: 'This is home'
Chris Paul addresses the media at practice to talk about his first time playing in L.A. against the Clippers since being traded. 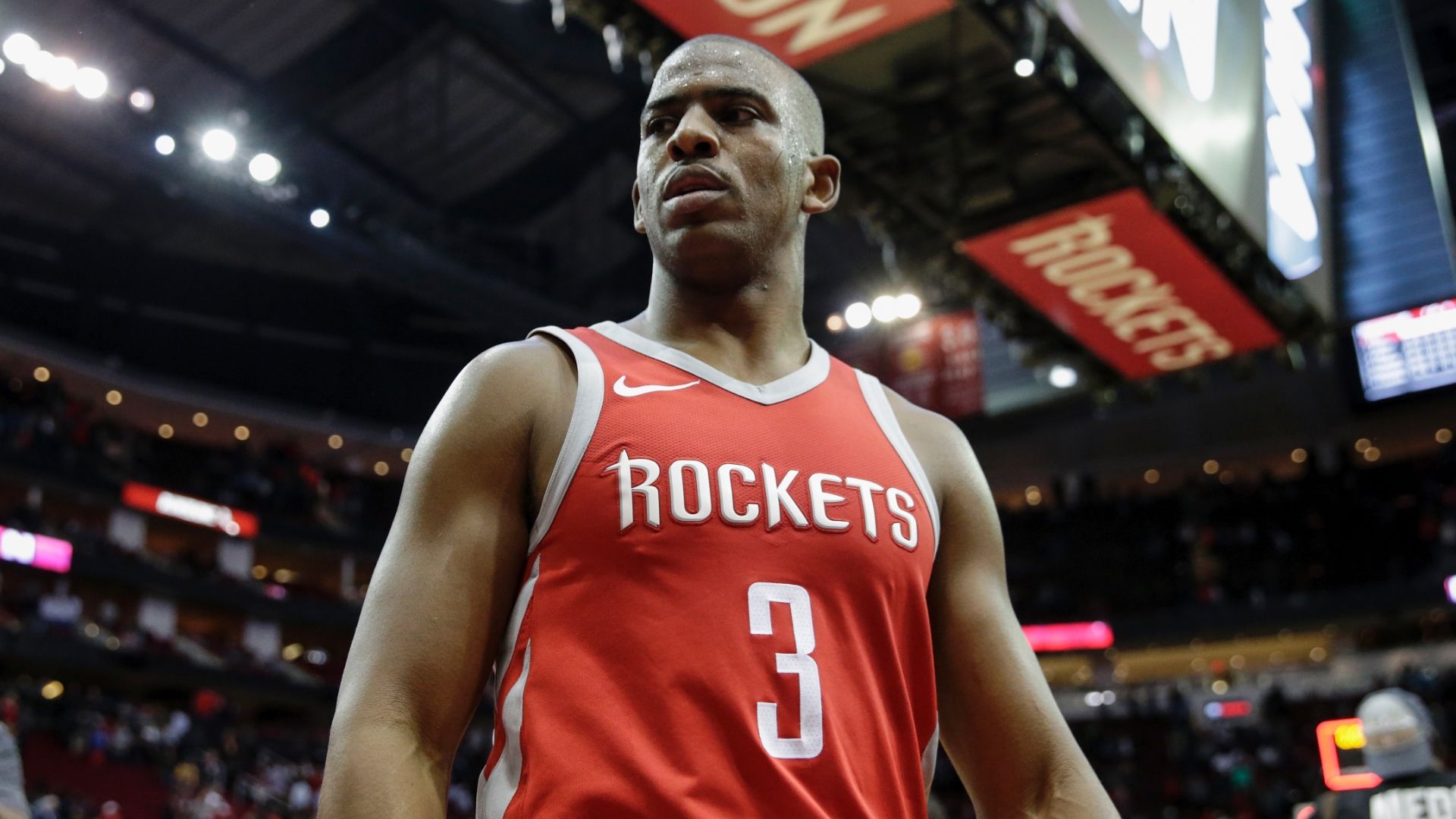