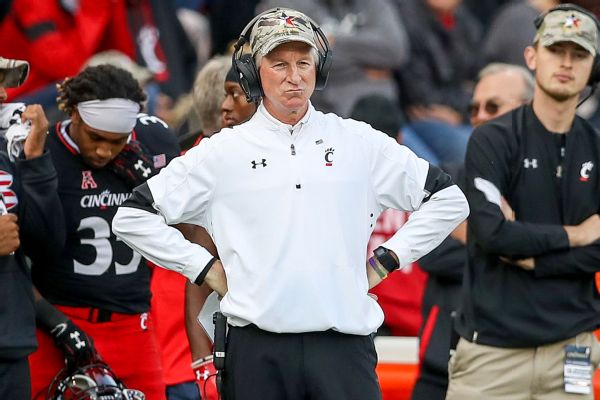 Tuberville was 29-22 in four seasons at Cincinnati, including 4-8 this season. There was speculation that Tuberville could be fired on Wednesday, the day his buyout would have been reduced from $2.4 million to $1.5 million.

Tuberville, 62, received a two-year extension from Cincinnati earlier this year that put him under contract with the school through 2019. The Bearcats made a bowl game in each of his first three seasons but lost all three.

"After much thought and reflection, I have decided to step down and resign from my position here at the University of Cincinnati," Tuberville said in a statement through the school. "I want to thank the board of trustees, the administration, the fans and the University for these last four years. I also want to thank our coaches, staff and anyone associated within our athletic department.

"Most of all, I will miss these players but know these young men will turn out to be outstanding leaders in the world and for me that is what it's all about. I am not done coaching and I look forward to my next challenge. Go Bearcats!"

The Bearcats lost five straight games to finish the season, missing a bowl game for the first time since 2010.

"He is a Hall of Fame coach," Cincinnati athletic director Mike Bohn said. "We thank him and his staff for their hard work and dedication to Cincinnati. Change is never an easy thing on our student-athletes, but their success and well-being is our primary focus. We will move onward and search for a head coach who can continue the growth of the football program in line with our goals of being class of the league."