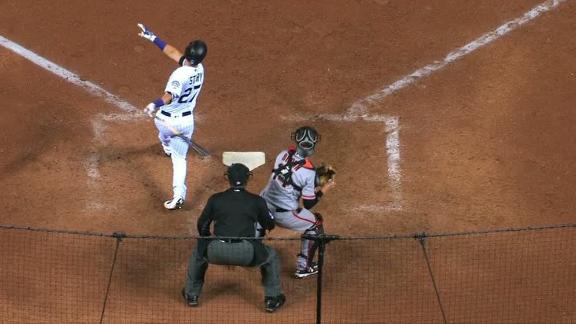 Jeff Samardzija did for the San Francisco Giants what the San Diego Padres and Arizona Diamondbacks could not do this season -- hold Trevor Story hitless.

Story struck out swinging three times and grounded out once against Samardzija, who went eight strong innings in the Giants' 7-2 win.

"Those big power lefties," said Samardzija, a right-hander. "We respect him as a player and we're going to keep pitching to him tough because he's proven what he can do."

Story, who averaged 14 home runs in his five minor league seasons, also entered Tuesday with 12 RBIs. His torrid start had put him on pace for 189 home runs and 324 RBIs this season.

But Samardzija used a masterful cut fastball to silence Story and the Rockies and claim his first win for the Giants after signing a $90 million, five-year contract in the offseason.

"If I told you I expected to hit seven home runs, I would be lying to you," Story said about his first week. "I really can't say that I thought it would be like this."