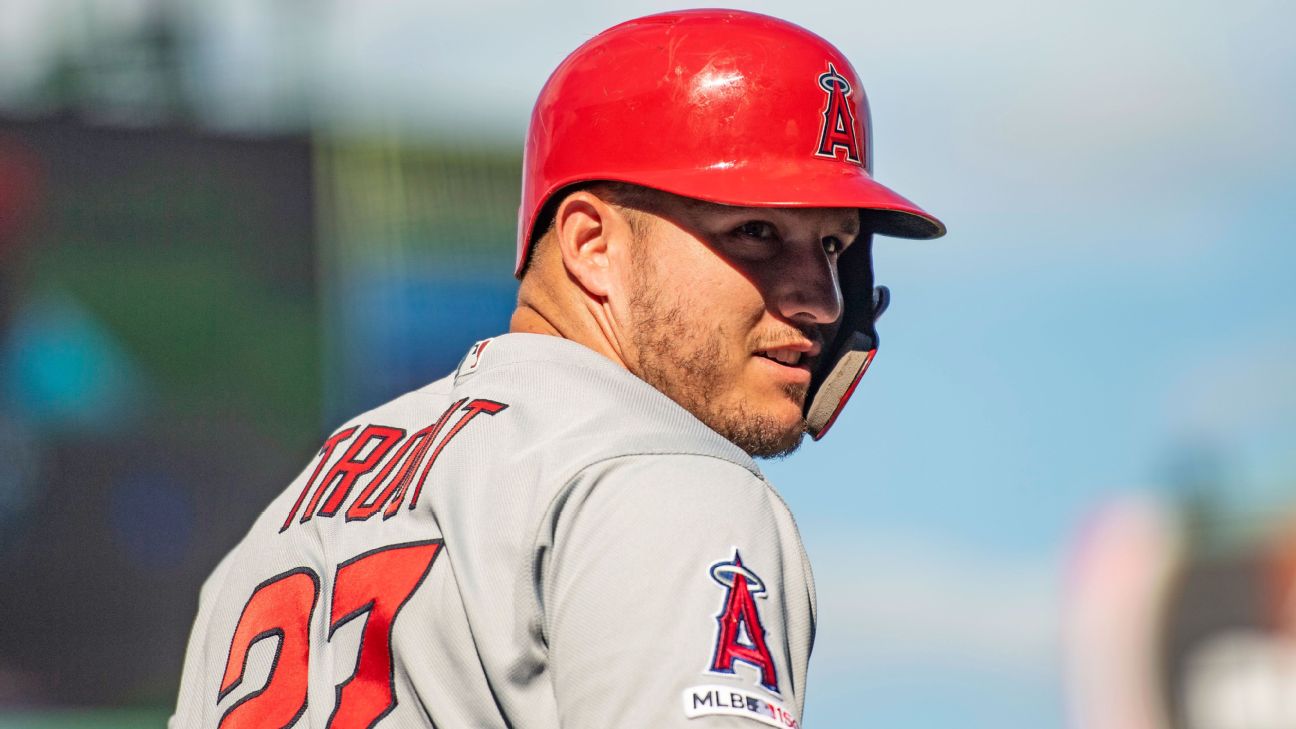 "Barely," according to Trout.

Bregman had Jameis Winston and Mike Evans, the Tampa Bay Buccaneers quarterback-receiver combination that connected for three touchdowns against the New York Giants on Sunday. They propelled Bregman to a 10-point victory over Trout.

In a little more than a month, the two will face off again for the American League MVP.

Bregman entered Wednesday batting .295/.419/.590 with 40 home runs and 7.9 FanGraphs Wins Above Replacement for a Houston Astros team that ran away with the AL West title.

Trout will either capture his third MVP and join Ernie Banks as the only players to win it more than once on a sub-.500 team, or he'll finish as the runner-up for the fifth time in eight full seasons.

"He's having an unbelievable year," Trout said of Bregman, "and I feel like this is my best year yet. It obviously sucks I'm not playing the last few weeks. But I follow Bregman all the time, and I see what he's doing, and I'm happy for him."

Trout approached a podium at Angel Stadium on a knee scooter he found in the clubhouse, a more efficient method of travel than his usual crutches. The Angels' 28-year-old center fielder was five days removed from a surgical procedure to correct Morton's neuroma, a painful condition affecting the ball of one's foot.

Trout expects to be off crutches in two days, get cleared for full activity in six weeks and proceed into a normal offseason, by which point the Angels' front office will be busy in its pursuit of starting pitching.

The Angels, still striving to contend, will likely be in the market for a high-priced free-agent starter, a list topped by Gerrit Cole, Madison Bumgarner, Hyun-Jin Ryu and, possibly, Stephen Strasburg. Trout laughed when asked if he would play the role of recruiter, believing he might get in trouble for tampering. He also expressed optimism in the direction of the franchise under general manager Billy Eppler, a sentiment that was at the root of his decision to sign a 12-year, $426.5 million extension in March.

"We'll have a lot of guys coming back," Trout said. "I'm sure Billy and the front office will do a good job of bringing guys in and we'll go from there."

The Angels will miss the postseason for the ninth time in the past 10 years, but Trout will finish 2019 with career highs in home runs and slugging percentage. He firmly believes this was his best season.

It occurred in the wake of tragedy. Tyler Skaggs, one of the Angels' best pitchers and most endearing personalities, died on July 1. Trout, whose brother-in-law Aaron Cox died 10 months earlier, was among Skaggs' closest friends on the team. After Skaggs' death, Trout emerged as a vocal leader, a significant breakthrough for a superstar player who admittedly used to "let my game talk for itself."

"I think Tyler would want that," Trout said when asked what prompted him to take on more of a leadership role. "And the team needed it."
Report a correction or typo
Related topics:
sportsespnalex bregmanmlbmike trouthouston astroslos angeles angels
Copyright © 2021 ESPN Internet Ventures. All rights reserved.
More Videos
From CNN Newsource affiliates
TOP STORIES