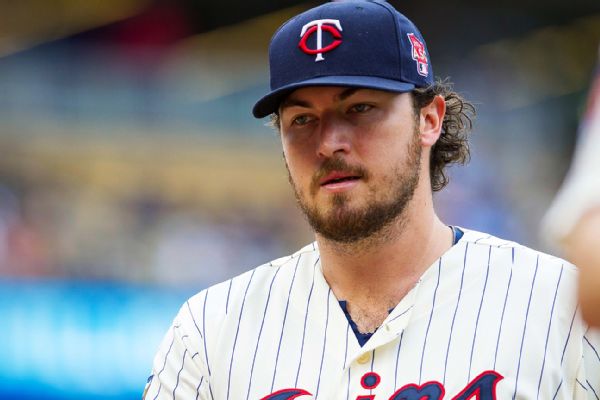 He stumbled to a 1-7 start, was demoted to the bullpen by the Minnesota Twins, cracked a bone in his leg when he was hit by a line drive and had season-ending surgery in July to correct thoracic outlet syndrome. He still has the rib that was removed during surgery that was causing nerve and vascular impingement in his throwing shoulder, and he might turn it into jewelry.

"I haven't decided what the next step is. I have a few ideas. Plating it with some sort of precious metal is one way to go," he said Wednesday, as the Twins started spring training workouts. "I'll figure out something to do with it before it corrodes."

"I'm going from the most difficult year of my career to a fresh start in spring training trying to prove that I'm a different guy than what I've seen over the past few years," Hughes said. "I was done with the rehab by the end of the season, so I was able to go into the offseason without any restrictions and treat it like a normal offseason throwing-wise, with bullpens and all that stuff."

A 30-year-old right-hander, Hughes pitched for the Yankees from 2007 to 2013, then signed a $24 million, three-year contract with Minnesota. The Twins liked him so much, they signed him to a $58 million, five-year deal in December 2014.

"You'd like to think if he can come back healthy he's going to be motivated to ... help us kind of change direction," Twins manager Paul Molitor said.

Hughes threw his full repertoire of pitches during a bullpen session on Wednesday.

"So far, so good," Hughes said. "I still have a ways to go before I might feel the full effects of it. I feel it is something I won't have a good gauge on until I throw at least three or four innings in a game situation."

Hughes is 84-76 in 10 major league seasons, including 28-26 with the Twins. He was the Twins' Opening Day starter in 2015 but was sidelined for a month starting in mid-August because of lower-back inflammation.

Minnesota is expected to rebound as it comes off a 59-103 season, the franchise's worst record since the Washington Senators went 50-104 in 1949.

"I think it's pretty common knowledge we need to pitch better," Molitor said. "There's different ways I can envision that happening. One scenario would be a healthy Phil Hughes [who] gives you a chance to win more times than not when he takes the mound."

Hughes got attention on social media with his response to Adele's performance at Sunday's Grammy Awards.

"I wish I could have gotten an Adele do-over on 168 pitches in my career," he said in a Tweet that garnered more than 3,000 favorites by the end of the night.