Tyson Chandler gives the Lakers exactly what they needed in debut 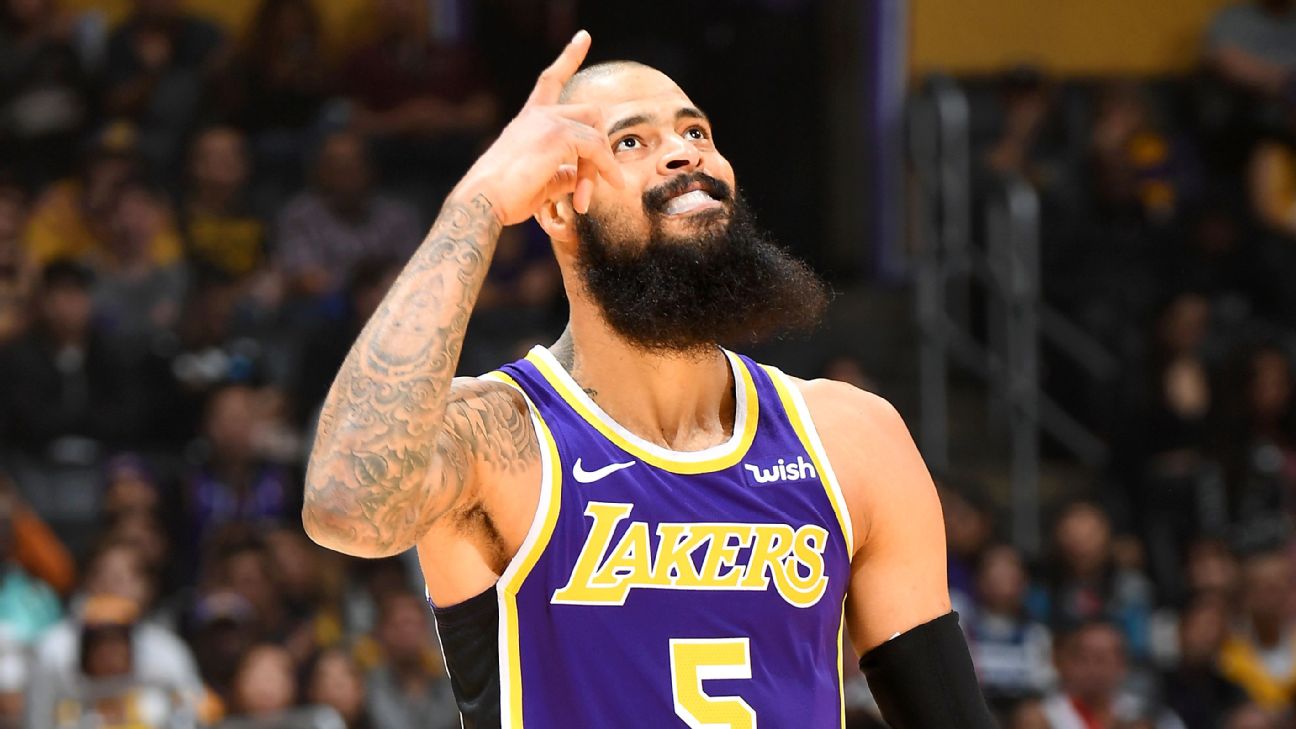 LOS ANGELES -- It was fitting that the Los Angeles Lakers beat the Minnesota Timberwolves of all teams Wednesday because their wildest stretch of the season to date -- and yes, this is taking into account the fists that flew against the Houston Rockets -- started just more than a week ago with a road loss to those very Wolves.

That loss wasn't just disturbing because of the way the Lakers failed to secure yet another close game down the stretch, or because they couldn't execute simple defensive instructions like fighting over screens to challengeJimmy Butler's 3-pointers.

What was more problematic was the sense of a fractured spirit that was apparent from watching L.A. play from LeBron James on down.

Yes, it was a quick trigger by Lakers president Magic Johnson to dress down coach Luke Walton in a meeting only seven games into the season, and yes it made him come off as volatile and even worse, hypocritical, after preaching patience throughout the summer, but Walton got the message: Winning needs to happen. Now. And apparently management came to see the roster it built in a more realistic light. An upgrade was mandatory.

And so Wednesday's 114-110 win over the Wolves wasn't just significant because it was the Lakers' third victory in four games since that Walton-Johnson summit, and it wasn't just notable because L.A. outscored Minnesota 28-22 in the fourth quarter to earn a tight one.

It was monumental because closing out the game for the Lakers was their new acquisition at backup center, Tyson Chandler. The accomplished veteran with a championship, Olympic gold medal and Defensive Player of the Year trophy to his name was making his Lakers debut one day after officially signing with the team following a buyout agreement with the Phoenix Suns.

"We needed the help now," Walton said after Chandler had nine rebounds in 23 minutes, none bigger than his tap out with 12.1 seconds left and L.A. clinging to a one-point lead. "And I don't know how that all works but give [general manager] Rob [Pelinka] and Magic credit for recognizing that and going out and getting that job done for our squad."

There's one working theory of why the Suns granted Chandler the buyout now instead of in February or March when the traditional wave of buyouts occur: Phoenix interim GM James Jones was a longtime teammate of LeBron's in Miami and Cleveland.

"James did LeBron a solid," a league source told ESPN.

When presented with the claim, LeBron said it was really Chandler who benefited the most.

"He deserves all the credit," he told ESPN of Jones. "He was very instrumental. He did right by Tyson as a veteran."

He then added more praise on Jones, whom he once called his "favorite player of all time" by telling ESPN that whenever he owns an NBA team down the line, he is saving a spot for Jones in his front office.

"I told him he needs an opt-out clause wherever he's at," James said with a smile.

Chandler's smile was even bigger at the end of the night. After driving a car full of his "s---" from Phoenix to his native L.A. on Tuesday -- "It's supposed to be five hours, but it took six because of traffic," he said -- his legs were cramped and his back was hurting, but his outlook was ebullient.

"I love this city the way they love me," Chandler said of the standing ovation he received when he checked in as the Lakers' first sub of the game. "When you're homegrown from here, go to high school and all of that, and you have these same fans that have been watching [your career] and now you represent the jersey that everyone has been cheering for their entire lives, you kind of become one.

"I've been on the other side and played the villain. Now it's great to be on this side and actually rep 'em."

It was the smallest of sample sizes, but the last time the Lakers played the Wolves, Minnesota collected a ridiculous 20 offensive boards. On Wednesday, L.A. owned the glass 47-40 while limiting the Wolves to 11 offensive rebounds.

"I think it helps stabilize us," Walton said. "I think it will help make us more of the consistent type of team we want to be defensively and rebounding."

Minnesota shot 4-for-13 (30.8 percent) with Chandler as the primary defender, according to research compiled by ESPN Stats & Information. He was particularly effective against the Wolves' budding star, Karl-Anthony Towns, who was 0-for-6 against him. In the 23 minutes he played, L.A.'s defense gave up only 47 points. In the 25 minutes he rested, L.A. gave up 63.

And the intangibles, so far, were off the chart.

"It's funny, I was just talking about that I was able to relax and breathe a little bit more," he said. "Coach asked what was wrong. I'm like, 'When Tyson's talking, I don't need to talk as well.' So having another voice in the locker room is big. Especially for me and Bron."

"They were solid," he said. "They were extremely solid. We felt free, we felt open when we went downhill. That's another asset for us."

And JaVale McGee, who put up 16 points on 8-for-10 shooting as the starter only to see Chandler close in his place, spoke about their depth.

"I think it's wonderful just because you got all the pressure on you when I'm in the game screening and rolling and running the floor, and then I go out and you think it's going to be different and it's the same thing coming right back at you," McGee said. "That really makes sense the way Luke was talking about we want to come in waves."

Those waves overwhelmed the Wolves on this night, and the rough surf the Lakers were riding has calmed for now. 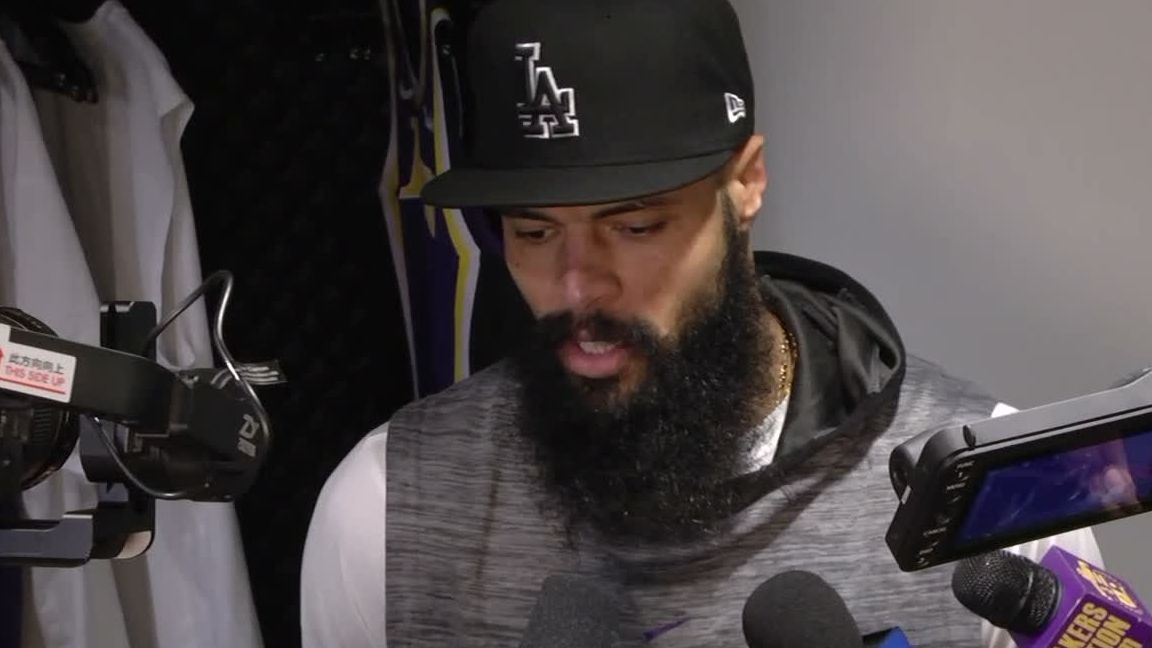 Chandler can't describe what it's like playing with LeBron
Tyson Chandler talks about playing in his hometown of Los Angeles and alongside a closer like LeBron James.

Chandler makes his presence known in Lakers debut
In his first game with the Lakers, Tyson Chandler impresses Mark Jackson with his defense on Karl-Anthony Towns.