Urban Meyer frustrated with 15-yard penalty called against him 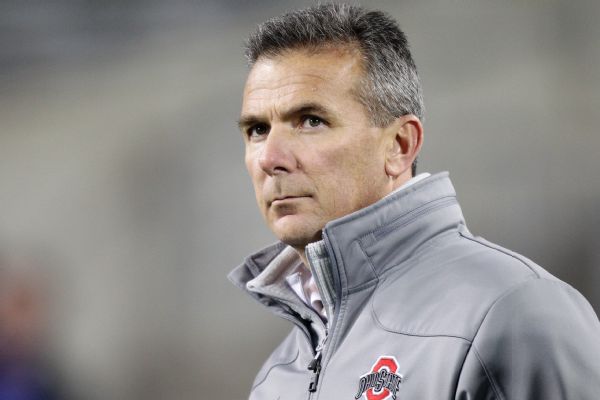 COLUMBUS, Ohio -- Urban Meyer's head feels fine. But the Ohio State coach is still stinging from the impact of the penalty he drew after an official inadvertently hit him on the sideline.

Meyer took exception to the 15-yard penalty called against him for sideline interference in the second quarter of Saturday's comeback win at Wisconsin, but the pain was more mental than physical after the errant hand struck him in the head while standing in a spot where he was apparently told he could legally be positioned.

"I don't know if I'm allowed to say this, and if not, I don't care -- it should not have been a penalty, per [Big Ten coordinator of officials] Bill Carollo," Meyer said during his Monday news conference. "He barely grazed my headset. Even [wife] Shelley said, 'Did you get hit in the face?' I said, 'What are you talking about?' Oh, that.

"It was my fault, but it should not have been a penalty. We just have to do a better job. That broke my heart. To put your players 15 yards back? 15-yard penalty for that, in a big game."

All it cost the Buckeyes on Saturday was a drive that sputtered after the flag on Meyer moved the offense back to face a second-and-27. Ohio State would be forced to punt, but the defense responded by stuffing the Badgers on the ensuing possession.

Meyer, who said he had only one previous penalty for 5 yards in an SEC championship game, clearly still wasn't over the call on Monday or the rule itself.

"You have to stay off the white, and I think I had one foot on the white," Meyer said. "But I was behind the ball, though. And for that reason, I always try to stay behind the ball. We all have to do a better job, and I'm not being critical, but 15 yards for that?