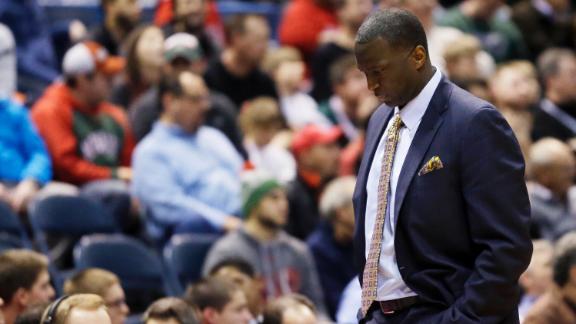 Detroit Pistons coach Stan Van Gundy believes the Sacramento Kings have made a mockery of their "very public" pursuit of George Karl and it's "inexcusable" how they've treated Tyrone Corbin.

The Kings announced Thursday that Corbin has been relieved of his dutiesand will be replaced by Karl, who has an agreement in place, after All-Star Weekend.

Corbin will remain with the Kings in an advisory role, Sacramento general manager Pete D'Alessandro said in a statement

"I think it's an unfortunate situation the way it's been handled," Van Gundy told reporters before the Pistons' 104-87 loss to the Spurs on Wednesday. "I think Tyrone Corbin has been treated very, very poorly by their organization. I think the way they've treated him is unfortunate and inexcusable for one of the real class acts in our business.

"To have a very public coaching, not search, courting going on and while you're asking him to coach games, I think he's handled it with a great deal of class."

In the official team release, D'Alessandro praised the job that Corbin had done sincereplacing Mike Malone, who was fired, in mid-December.

"I have the utmost respect for Tyrone as a coach and person," D'Alessandro said in a statement. "He's a man of great integrity, a consummate professional that managed a difficult situation with class and professionalism. I look forward to continuing to work with Tyrone moving forward."

Corbin, who coached the previous three-plus seasons with the Utah Jazz, has a record of 7-19 with the Kings this season.

Van Gundy, however, was unhappy with the Kings' courtship of Karl, which reportedly has been going on since Corbin ascended into Malone's position.

Malone's father, Brendan, is an assistant on Van Gundy's staff with the Pistons.

"I didn't like that obviously with Brendan on the staff, but coaches get fired all the time," Van Gundy said of Mike Malone's firing. "But then you give Tyrone the job and if you want to make a change, even if people don't like it, obviously as an owner you have a right to make a change, and that's up to you.

"But you don't need to do it the way they're doing it now. That thing's been in the news for two weeks now, and Tyrone's coaching and they obviously don't have any problem treating him like that.