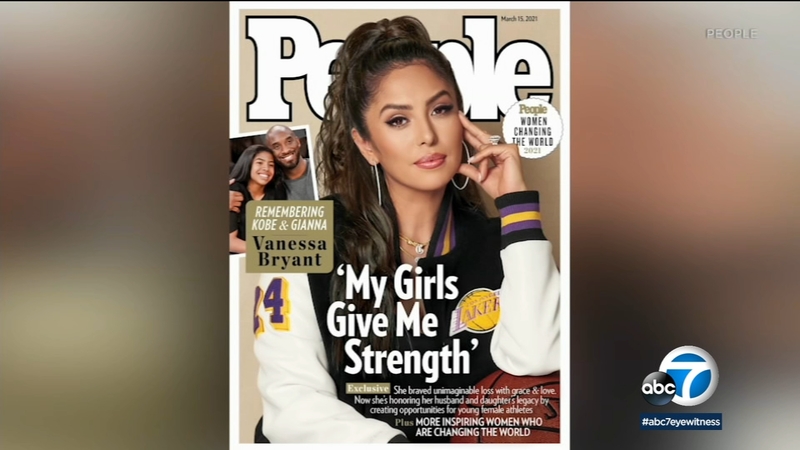 Vanessa Bryant appears on the newest cover of People magazine, which interviewed her on year after the tragic death of her husband, daughter, and seven others in a Calabasas helicopter crash.

Vanessa Bryant is part of the Women Changing the World issue -- set to be released on Friday.

In an exclusive interview, Bryant talked about the devastating loss of Kobe and Gianna, who died when the helicopter slammed into a hillside on Jan. 26, 2020.

She said Kobe and Gianna motivate her to keep going and to try to find "the light in the darkness."

"My girls help me smile through the pain," she said of her daughters Natalia, Bianka and Capri. "They give me strength."

The pilot who crashed the helicopter carrying Kobe Bryant, killing all nine aboard, made a series of poor decisions that led him to fly blindly into a wall of clouds before crashing into a SoCal hillside, federal officials say.

Last month, Vanessa Bryant amended her lawsuit against the Los Angeles County Sheriff's Department, asking a court to publicly disclose the names of the deputies accused of taking and sharing photos of Kobe Bryant and other victims at the crash site.

In an Instagram story, Vanessa Bryant criticized the Sheriff's Department for trying to redact the names of the accused deputies.

She noted that in any other situation the suspects names would be unsealed. She described the move as a double standard.

The National Transportation Safety Board primarily blamed pilot Ara Zobayan in the Jan. 26, 2020 crash that killed him along with the eight passengers who were heading to a girls basketball tournament.
Report a correction or typo
Related topics:
sportslos angeles lakerskobe bryanthelicopter crashnbabasketball
Copyright © 2021 KABC-TV. All Rights Reserved.
More Videos
From CNN Newsource affiliates
TOP STORIES