'We have a heartbeat': How A.J. and Kate Pollock faced their daughter's premature birth during COVID-19 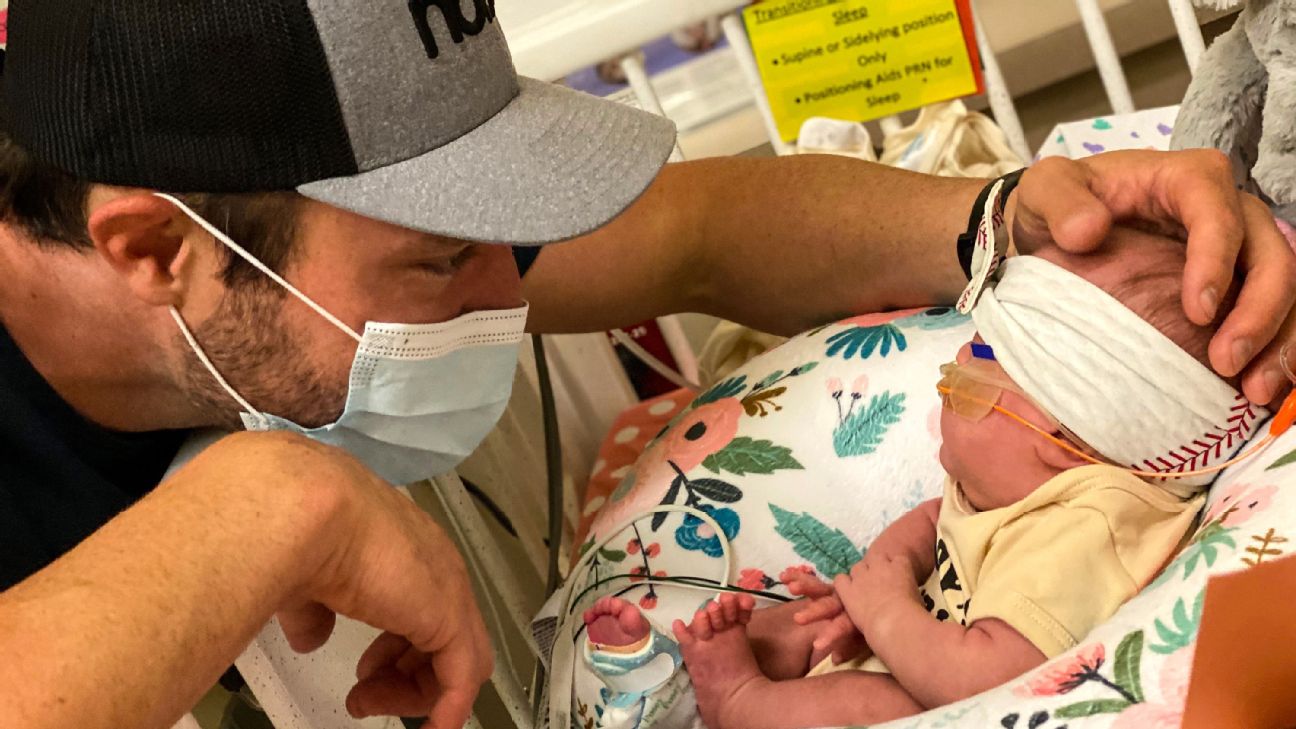 We have a heartbeat, someone in the delivery room said loudly, but A.J. Pollock's memory of that and a lot that happened in the moments before and after is hazy. Under the best of circumstances, the birth of a child is disorienting for new parents: pain for the mother, a feeling of utter helplessness for the father, their uncertainty swirling underneath the running conversation among the doctors and nurses that is so practiced and loaded with medical jargon that it sounds like a different language.

But for Kate and A.J. Pollock, there were also complications. A premature arrival, by three months, amid a looming concern about COVID-19, which had been declared a global pandemic the week before Kate went into labor. Maddi Mae Pollock was born at 3:06 p.m. on March 19, 2020, weighing one pound and six ounces.


We have a heartbeat, a declaration of hope amid all those fears. "The whole time I'm thinking like, 'What is a one-pound baby going to look like?'" said A.J. Pollock, who plays for theLos Angeles Dodgersand is in his ninth year in Major League Baseball. "And she came out and it was shocking how small she was."

Kate Pollock recalled, "She was delivered, kind of put on my leg very briefly, and they had to quickly wrap her in plastic and intubate her. She was whisked away pretty quickly."

A.J. remembered, "Two seconds later, she's gone and I'm chasing her. They showed me where the NICU (neonatal intensive care unit) was. And then you're like a zombie. I'm just floating. I have no idea what just happened. You're excited, you're happy, but you're also just like, 'What happened?'

"And you know there's going to be so many challenges that are going to come down the pipe, because you're just staring at her and she's so small."

The pregnancy had not been comfortable for Kate, and she had begun to experience some cramping after 23 weeks and five days. When the time between cramps diminished, the Pollocks went to the hospital and the decision was made for Kate to stay overnight, for observation. A.J. went home.

But as Kate stood up from her hospital bed, her water broke. Her obstetrician raced to the hospital; her husband did as well. The initial aim was to hold off Maddi's birth for as long as possible. The longer she stayed inside of Kate, the better her chances for health. "The neonatal doctor came in and she sat down with us and talked about Maddi's odds of making it," Kate recalled. "And whether we would like to resuscitate if she was born that early. It was strange, because at 23 and five [days], it's very different for some reason than 24 weeks. There's just different odds because they base it by week of gestation. And if we could get to 24 weeks, she would have about a 60 percent chance of making it, and they thought the odds were slightly better in that specific NICU."

A.J. texted friends: Pray for us. Pray for Maddi. Pray for Kate. He told the Dodgers' chaplain, and the chaplain of his former team, the Diamondbacks, and the power of good will was mustered. The avalanche of response moved him. When you're going through something like that, he would say later, you feel the sincerity of others, how genuine they are. "I think that was the time we realized, OK, she's been blanketed in prayer," Kate said. "She's going to be OK.

"I never even really questioned it. I just had this feeling that everything was going to be OK."

Kate was in labor for 16 hours. "When she came out, and they said, 'We have a heartbeat," Kate remembered. "And there's tons of people in the room -- nurses, the doctors, labor and delivery nurses, obviously the whole NICU team. And they all shouted, 'We have a heartbeat.' And everyone's cheering, and obviously, I was crying.'"

To Dr. Matthew Abrams, neonatologist for the Pollocks, couples who go through the birth of a preemie cope with the shock and unexpectedness of coming to the hospital in the midst of a pregnancy and then suddenly having a delivery, with so many unknowns. "I think at that time," he recalled, "they were both just worried whether she was going to survive."

A week before, Major League Baseball and the rest of the sports world was shut down amid fears over the coronavirus, and for the parents of a preemie so vulnerable, COVID-19 was an unseen, omnipresent threat. "I honestly had a lot of anxiety just based around the pandemic," Kate recalled. "I was obviously very nervous that Maddi wasn't going to make it. But on top of that, I was terrified that one of us was going to infect her somehow."

And the coronavirus isolated the Pollocks in the most trying moments of their lives. "When you're in the NICU for so long, emotionally, you just need a breather from it," A.J. said. "You need to grab a coffee with a friend or you need to just see someone that you're super close with, and we couldn't do that."

One of the coronavirus rules put in place at Maddi's NICU was that parents could not tend to a baby together. One or the other, but not together. Some days, one of the Pollocks would sit in the car in the hospital parking lot while the other was with Maddi, and then they would trade places. "We were kind of ships passing in the night," Kate said, "and we were our only support system. When we were home together at nighttime, we would just unload on each and go through everything that happened that day."


A.J. had searched online about premature births, and what he saw -- none of which necessarily applied to Maddi -- was frightening, overwhelming. Dr. Abrams nudged Kate away from digging online for information, and laid out everything for the couple -- what the process would be, how they intended to help Maddi gain weight, specific benchmarks. "He made sure that we know the facts and what's going on with Maddi, but he also had just an amazing bedside manner," A.J. said. "He just did an incredible job."

Babies who are born so prematurely, Dr. Abrams explained, have a number of issues that they're uniquely at risk for that don't happen for babies who are born full term. The blood vessels in their brain are fragile. They are at risk for feeding problems and intestinal inflammation, and might require at least one blood transfusion during their stay. There's an ongoing risk for infection.

The Pollocks had met at Notre Dame, where Kate was a midfielder in lacrosse and A.J. played baseball. In sports, there is a constant refrain to stay in the moment -- to focus on each game, each pitch, each play; for the Pollocks, this was almost a reflex. As they absorbed their conversations with the medical staff, Kate and A.J. reached a mutual understanding that they would concentrate on each hour, each day, and try not to think about the frightening unknowns.

Hour by hour, day by day, Maddi grew. You are aware of different checkpoints, A.J. said, and you keep hitting those checkpoints and your little girl is moving forward. "Looking back on the pictures," he said, "I'm looking at my little girl with a tube and three other wires down her throat. I don't know how you can look at that and be completely OK, like she's totally fine."

Within the NICU, Maddi developed a reputation. "She was a lunatic," Dr. Abrams said. "We would regularly joke that at some point we would find Maddi climbing from the ceiling."

"A feisty little thing," Kate said, grinning. "She is very strong-willed. ... She used to break out of her swaddle and extubate herself when she was one pound and six ounces."

In the middle of June, the air conditioning in the Pollocks' home had stopped working, the temperature in the home climbing to 85 degrees, and during a restless night, A.J. felt poorly. He went to take a turn with Maddi in the morning, but still feeling badly in the afternoon, he decided to hold off, unsure about why he felt so bad. The fear of COVID-19 was omnipresent, and he went for a test. As they waited for the result, A.J. slept in a different part of the house.

The next morning, June 19, Kate went to check on A.J. with their dog Ollie, just as his phone rang. Ollie scratched at the door, trying to get in, as A.J. answered. It was the Mayo Clinic, calling with word that he had tested positive for COVID-19, and A.J. immediately called to Kate to stay out of the room. And he thought of Maddi, with whom he had just been, along with other NICU babies. "You're afraid that you're going to kill your baby," A.J. said, "do something to harm her. A baby who has gone through so much already."

On the other side of the door, Kate sat on the floor of her home alone, and sobbed. The whole journey was difficult, she would say later, but those days after A.J. tested positive were some of her lowest.

Maddi was quarantined, as were other babies; they were all tested. The nurses with whom A.J. had come into contact were quarantined, and tested. Kate was tested. "You're just kind of waiting for the results, and that was terrifying," A.J. said. "That part was awful."

Dr. Abrams said, "We were concerned."

All the tests came back negative. "We're very fortunate for that," Dr. Abrams said.


Meanwhile, the players' association and MLB agreed to terms on a 60-game season that would start in late July. "I think the season's going to happen," A.J. told Kate. "What's your comfort level?"

He had the option of sitting out the season; David Price, Ryan Zimmerman and others would choose that route.

Kate paused, and responded, "Could you really watch the Dodgers win the World Series on our couch? Because I couldn't."

That was that. A.J. would play.

One morning in July, at about 5 a.m., Maddi pulled out her breathing tube and the attending nurse began to tape the tube back in place, and decided to wait, to see how Maddi would do without it.

She did fine, as it turned out. As the doctors had predicted for the Pollocks, feeding Maddi would be a challenge, a last hurdle in her time in the neonatal intensive care unit. But one day in July, a doctor stopped by to check on Maddi and said to Kate flatly, "You've got to take this baby home. ... She's going to thrive when she gets there. You're going to be around her. She's going to feel your love all the time and she's going to be great.

Kate called A.J., and A.J. called Dodgers manager Dave Roberts about getting permission to take a day to bring Maddi home. Of course, of course, whatever you need. You've got to bring her home.

When Kate and A.J. went to get Maddi at the hospital, it was the first time since Maddi's birth, 128 days earlier, that the three had been together. The nurses and doctors who had become family for them were there, crying with them as the Pollocks departed, a red carpet laid out, after months in the NICU. One hundred twenty-eight days.

The first drive home was nerve-wracking, concerned glances to the back seat after every bump, every curve. The Pollocks walked through the front door to their home, past the sign placed by friends: WE LOVE YOU MADDI MAE.

Mom and Dad got settled, and then they were on the couch, with their little girl, the whole thing surreal. A.J. and Kate sitting in their house with Maddi, watching television. At home.

"And now we get to show her the world." 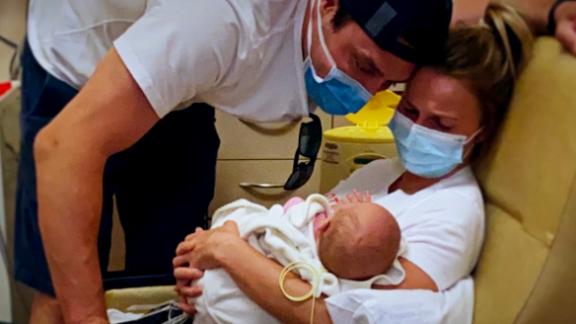