'We knew we could do it:' Reliving the Raptors' title run

TORONTO -- FOR THE franchise's entire lifetime, the Toronto Raptors had seen these moments go against them: buzzer-beaters to defeat them, shots that came up short to end their seasons. They'd lost heartbreaking seven-game series and embarrassing four-game sweeps.

Matt Devlin had called all those playoff moments, but never one like the end of Game 7 against the Philadelphia 76ers.

"That happened right here," the Raptors play-by-play man says, standing near the right corner where Kawhi Leonard put the Raptors into the Eastern Conference finals. "4.2 seconds on the clock, Kawhi turns the corner, Ben Simmons passes him off to Joel Embiid and Kawhi puts up that high arcing shot that bounces four times and ultimately goes in.

The Toronto Raptors welcome Leonard to Scotiabank Arena tonight (7 p.m. ET on ESPN and the ESPN App) for the first time since he helmed their improbable run through the playoffs this past spring, culminating in the franchise's first NBA title.

Leonard's shot might be the indelible moment for many, but for Leonard's former teammates, the memories are more personal.

KYLE LOWRY SPENT the first 20 years of his life in Philadelphia. He's a loud, proud Eagles fan. And he plays with an Allen Iverson-sized chip on his shoulder.

So eliminating the 76ers meant something extra.

"That was home," Lowry said with a smile. "That was very special."

Lowry remembers how difficult the series was -- Toronto trailed 2 games to 1, almost went down 3-1 and avoided a Game 7 overtime only because those four bounces on Leonard's shot went the Raptors' way.

"They were built for a championship, and built for the long haul," he said of the 76ers. "The Milwaukee [series], we knew we could do it. ... Milwaukee was fun. But the Philly series was the toughest."

Lowry brought the Larry O'Brien Trophy back to Philadelphia this summer, and had a big celebration to honor the occasion.

FOR MOST OF the 2019 playoffs, Fred VanVleet went cold. Through his first 15 games of the postseason, VanVleet was an abysmal 8-for-41 from 3-point range.

But on the off day between Games 3 and 4 of the East finals, VanVleet went back home to Rockford, Illinois, for the birth of his second child, Fred Jr.

"I was never looking back after that," VanVleet said. "Just trying to stay in that pocket."

Over the final nine games of Toronto's run, VanVleet shot an absurd 30-for-57 from 3-point range -- including a 7-for-9 performance in Game 5 in Milwaukee to give Toronto a chance to advance to the NBA Finals in Game 6.

This season VanVleet leads the league in minutes per game (37.8) while averaging career highs in points (18.7), assists (7.3) and steals (2.0). According to ESPN's Bobby Marks, he's in line for a nine-figure contract when he becomes a free agent this summer.

Three years ago, VanVleet -- whose motto is "Bet on yourself" -- was an undrafted rookie biding most of his time in the G League. NBA teams had dismissed the 6-foot point guard as too slow and too small, fueling him.

"You think about that, and it's like 'Damn.' It's crazy how none of that stuff matters at all," he said. "It's about can you play or not, and are you in a good situation?"

Whatever his next situation is, VanVleet will always have fond memories of last spring, from the birth of his son to his hot shooting streak to the culmination of the Raptors' championship run.

"It's all like a blur," he said with a smile. "Those last three weeks lasted forever."

WHEN HE ARRIVED in Toronto in 2017, Serge Ibaka wondered if his championship moment had passed him by.

Ibaka had been one of the cornerstones of an Oklahoma City Thunder team with Kevin Durant, Russell Westbrook and James Harden. That team reached the NBA Finals in 2012 but lost to the Miami Heat in five games. In all, OKC reached the conference finals four times, the last coming in 2016, when they took a 3-1 lead over the 73-win Warriors, only to have it all unravel.

"After seven years of trying, trying, trying, we get so close, and then the seventh year we were so close and Golden State knocked us down," he said. "That was the moment [to win it]."

Ibaka, though, wound up getting another moment, this time in the 2019 Finals against that same Golden State franchise.

The big man saved his best in the 2019 playoffs for last, averaging 16.7 points on 66% shooting in Games 4-6 of the Finals. Although he'd been used off the bench for the entire postseason, he was on the court when the final buzzer sounded at Oracle Arena, with the Raptors officially cementing their title.

"Because it is hard when you are so close so many times and it's like, 'Man, I'm going to finish up my career like that?' It's like, 'Man, was that a waste of time?'

"Sometimes you feel like that, even if you know it's not."

THE RAPTORS ACQUIRED Marc Gasol at the trade deadline from the Memphis Grizzlies, where he'd been a franchise pillar for a decade.

"It's bittersweet," he said, of the emotions running through him when he got that phone call. "It's hard realizing you have to move on, and that the run is over. But at the same time, on the same call, the same thought, you go, 'S---. I'm going to a championship team. I'm going to have a chance to compete at the highest level.'"

While Gasol led the Grizzlies to their greatest success, his relationship with Memphis ran deeper than wins and losses. The big man had gone to high school there while his older brother Pau was starring for the Grizzlies, and he'd teamed with Zach Randolph, Tony Allen and Mike Conley Jr. to make the "Grit 'N' Grind" Grizzlies a beloved team, although one that never got over the championship hump.

So when Gasol did finally win that title with Toronto, he had "GRIT&GRIND" inscribed on his Raptors championship ring.

"Zach, TA, Mike, they go beyond what basketball means to me," he said. "We spent so much time together. Not all on the floor, but on the downsides, on the losses. You go out to dinner, and you go out and have each other's backs.

"That's what makes it bigger than basketball."

Like Leonard, Gasol played a part in Toronto's transformation into a championship team -- particularly with his defense against Joel Embiid in that epic clash with the Sixers in the second round.

By the time the playoffs were over, he was exhausted.

NICK NURSE TOOK a trip down memory lane last month. The Raptors coach and assistant Nate Bjorkgren were honored at an Iowa Energy game for winning the NBA title.

As the two native Iowans and former Energy coaches took in the game, Nurse thought about how much had changed from when he was roaming the sidelines in Des Moines.

"I used to say, one of my favorite things about coaching in the D-League was when you lost on the road, you didn't have to talk to anybody after a game," Nurse said with a smile. "You could go back to your room, get a pizza, shut the door, and set the alarm for 3:30 a.m. for the wakeup call.

"But it did [seem far away]. It seemed remote."

The same applies to most of Nurse's coaching career. He spent a decade coaching in England, had two stints with a USBL team in Oklahoma, and coached for D-League teams in Des Moines and Rio Grande, Texas, before joining Toronto as an assistant in 2013.

He took over as head coach from Dwane Casey one month before Toronto acquired Leonard.

In some ways, the challenge was similar to what he'd done many times on his journey: find a way to win with a team that had come together for one run and likely wouldn't stay intact for a second one.

"We knew this was a possibility, was that we knew it was maybe a one-shot deal," he said. "We had to believe we could go all the way, and then we had to put in the mental work to get there, and lots of other things. ... But I think we all understood that we were good enough."

WEDNESDAY WILL BE the 181st day since the Raptors won the championship, and Devlin says not a day goes by that people don't remind him of it, sharing their stories from Toronto's playoff run.

As last season played out and Toronto looked like it had a chance to have a special season, he noticed something different about the way the Raptors carried themselves.

"You go back to Kawhi saying it starts in training camp, and there was that feeling," he said. "This group believed they were going to win it all. They really did. It's not just, 'Oh yeah, they believe they're gonna win.'"

It's a sentiment backed by Pascal Siakam, who earned Most Improved Player honors and established himself as a future star during Toronto's title run.

"The whole season was up and down or whatever, but we just went through a lot of tough battles," he said. "It was fun to see how we kind of bounced back every time we fell into a hole. We always found a way to win."

That they continue to do so, with a 16-7 record even after Leonard left that takes the sting out of his departure. As does the banner hanging in the rafters at Scotiabank Arena, commemorating Canada's first NBA champion.

"[This fan base] really does stretch through the entire country," Devlin said. "To me, that's what made it so special. It really was a country behind a team. And every place you go, everybody talks about it." 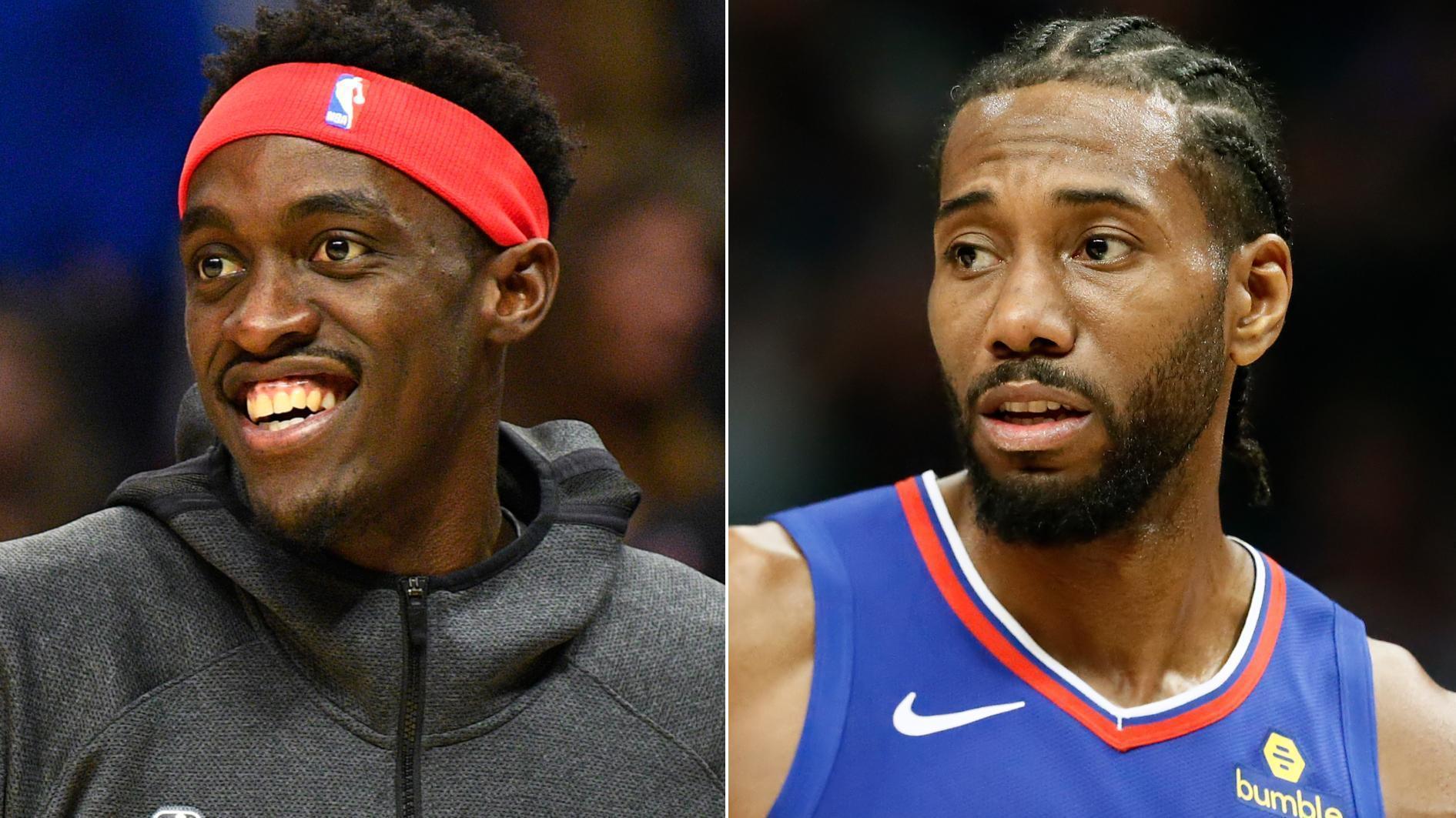