What we learned from Saturday's spring football games 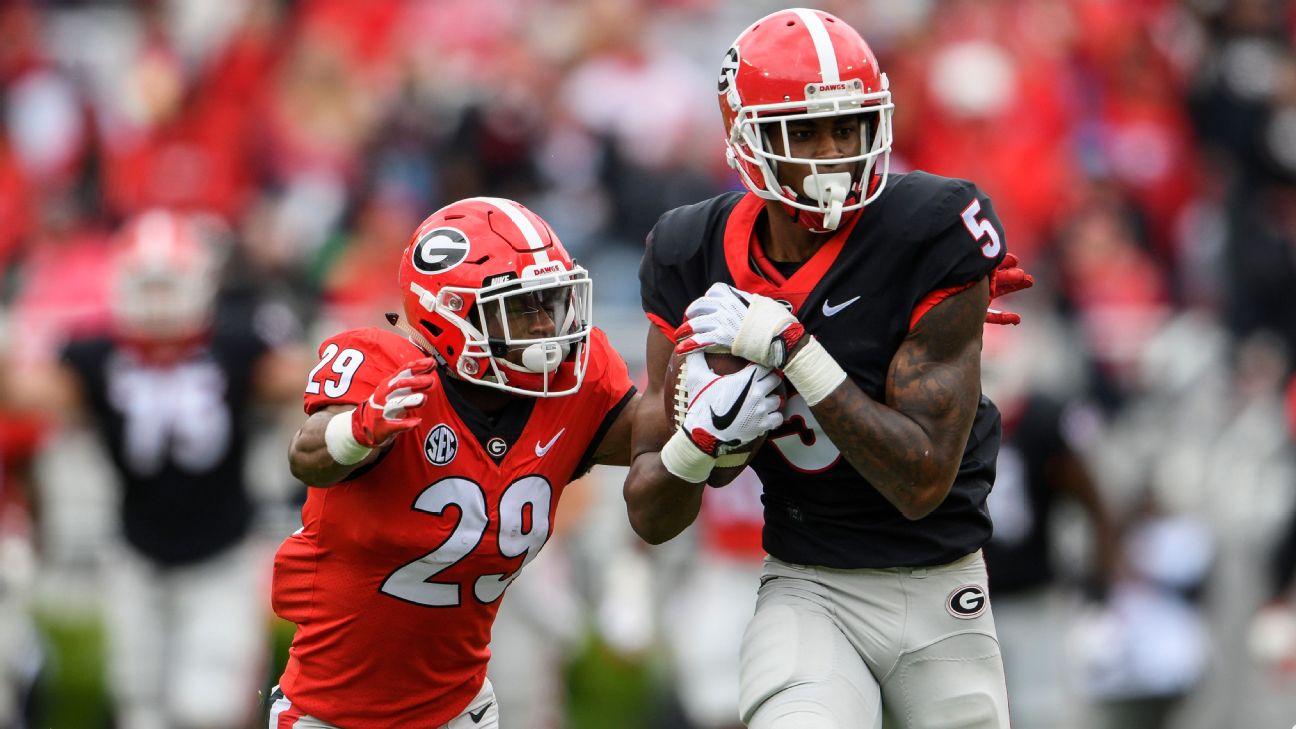 Georgia and Oregon, programs with high hopes for a playoff run, were among the teams hitting the field Saturday for the last big weekend of spring football games.

Here's what we learned.

There were two ways of looking at G-Day if you're a Bulldogs fan. If you were bummed out by the very un-spring-like weather and in a pessimistic mood, then you saw an offense that struggled to execute with consistency.

Despite airing it out, the passing game really didn't do much. One of the biggest plays of the game was a reverse pass touchdown thrown by wideout Matt Landers, and quarterback Jake Frommcompleted just 14 of 29 passes for 116 yards, one touchdown and one interception.

But if you were happy just to see football again and looking on the sunny side of life on Saturday, then you had to be pleased with the play of the defense, which held the running game to roughly 3 yards per carry and racked up seven sacks.

The secondary, which has the tall task of replacing star cornerback Deandre Baker, played aggressively, notching a pair of interceptions and a handful of pass breakups. -- Alex Scarborough

Coach Manny Diaz said before the spring game even began that no decision would be made on the starting quarterback, and he held to that after it finished Saturday in Orlando, Florida. N'Kosi Perry, Jarren Williams and Ohio State transfer Tate Martell rotated snaps throughout, with Perry getting the first opportunity to run with the first team.

Perry ended up throwing for 145 yards and a touchdown, and looked far more polished than he did a season ago, when he split time with Malik Rosier. His growth and improvement puts him firmly in the mix to win the job come fall. Martell made some nice plays as well, specifically in shotgun, where he is most comfortable, throwing for two touchdowns while Williams threw for another.

Diaz praised them afterward, saying all three understand they have the ability to start and win for the Hurricanes. Tight end Will Mallory is a player to watch come fall. Coaches have raved about his development this spring and he showed it in a big way, with three catches for 63 yards and a score. Buffalo transfer K.J. Osborn had a big day, too, as did linebacker Patrick Joyner Jr. and defensive lineman Jordan Miller. -- Andrea Adelson

Oklahoma State spent the first half of its spring game running position drills. Then for the scrimmage portion, the Cowboys weren't even allowed to tackle to the ground.

So, it was difficult to garner much insight, including about the quarterback derby between redshirt freshman Spencer Sanders and senior Dru Brown, the former Hawaii graduate transfer. The two rotated snaps during the team session, and neither stood out over the other.

The Cowboys do have the offensive firepower to be a player in the Big 12, behind running backChuba Hubbardand wideout Tylan Wallace. They seem to have another promising playmaker at outside receiver in redshirt freshman C.J. Moore, who impressed Saturday with several notable catches opposite Wallace. Yet as electric as Oklahoma State appears to be at the offensive skill positions, QB play will ultimately determine whether the Cowboys reach their ceiling. To that end, Saturday's spring game revealed very little. - Jake Trotter

What stood out immediately about Oregon's spring game didn't really have anything to do with what was on the field; it was what was in the stands: 35,000 people.

That's not an Oregon spring record, but the Ducks have found a way to generate an annual springtime buzz for their program unlike any of their peers in the Pac-12. On Saturday, all eyes were on quarterback Justin Herbert, who might have been just a few days shy of being the NFL draft's No. 1 overall pick had he decided not to remain in Eugene for his senior year.

Without any meaningful game planning, it's silly to try to read too much into any one player, but Herbert certainly looked the part. His squad, the No. 1 offense and the No. 2 defense, came away with the win, setting the stage for a season in which Oregon expects to be part of the College Football Playoff conversation. -- Kyle Bonagura

After a touchdown-less spring game, it's clear UCLA has taken significant strides on the defensive side of the ball since last year's 3-9 campaign in which it allowed 34.1 points per game.

LB Krys Barnes, in particular, has the look of a player who could be among the Pac-12's best defensive players. That said, the Bruins were somewhat vanilla in their offensive playcalling, making it tough to make any firm, worthwhile conclusions based on what was on display Saturday.

Quarterback Dorian Thompson-Robinson noted that he expects the offensive to be much more dynamic when it actually matters. Thompson-Robinson figures to have a strong grasp on the No. 1 spot after seeing significant playing time as a true freshman, but coach Chip Kelly wasn't ready to make any decisions about who will start come fall. Austin Burton throws a nice deep ball and could give DTR a run for his money. -- Kyle Bonagura
Report a correction or typo
Related topics:
sportsespnspringpracticedepth chartsoregon duckscollege footballgeorgia bulldogsoklahoma state cowboysgamesmiami hurricanesucla bruins
Copyright © 2020 ESPN Internet Ventures. All rights reserved.
More Videos
From CNN Newsource affiliates
TOP STORIES