Which player had the best sneakers of Week 14 in the NBA? 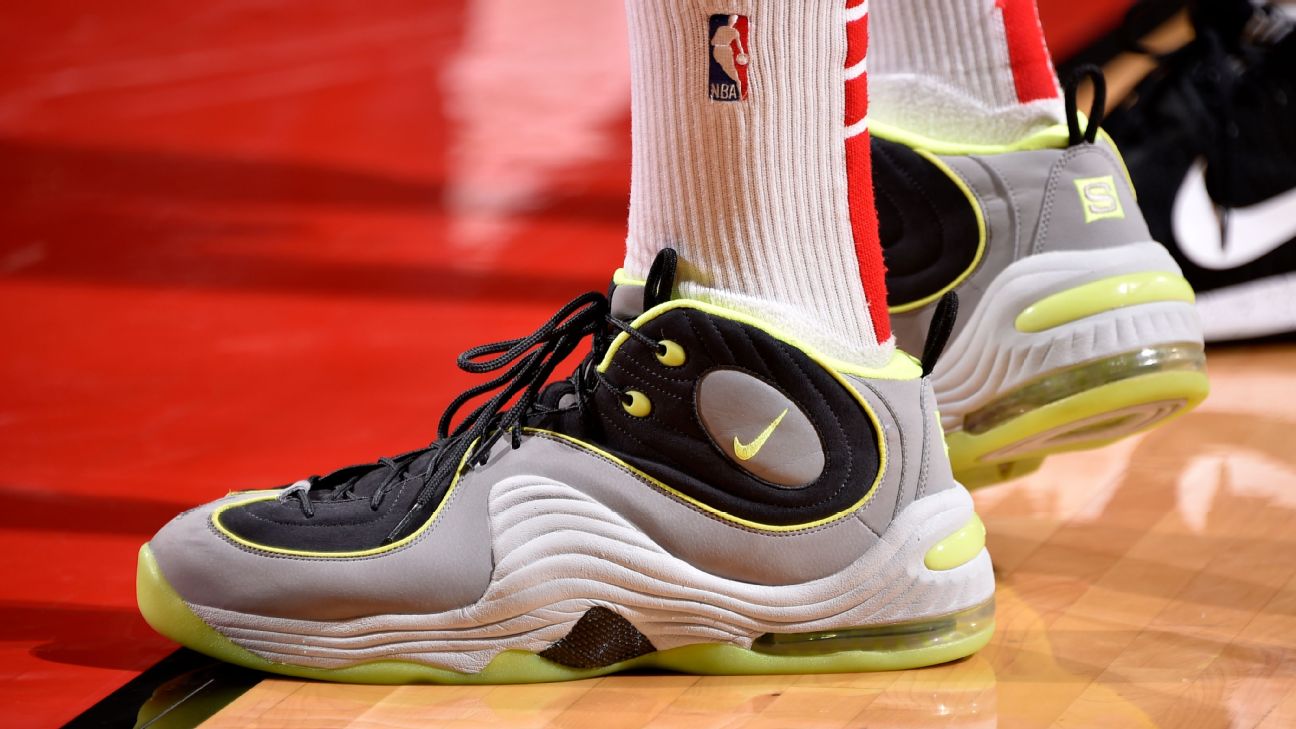 After being snubbed in Week 13 and left out of our top sneaker highlights for the first time all season, PJ Tucker was back with a vengeance.

The Rockets wing kicked the week off with a 1-of-140 pair of Air Jordan 4s, recently made exclusively for Florida Gators athletes, along with an unreleased edition of the Nike Air Pippen 1 and a player exclusive colorway of the Nike LeBron 9 from 2012.

Then he pulled out perhaps his rarest pair of the entire season.

Originally made in 2009 for Sole Collector Magazine's fifth anniversary, only 10 pairs of the gray and neon Air Penny 2 were ever produced. The beautifully executed colorway -- I'm perhaps biased, since I actually designed them during my former Sole Collector days -- was only given to four Nike employees, two magazine staffers, Penny Hardaway himself and me.

Tucker tracked down one of only two size-14 pairs made -- Penny has the other.

All week long, Nike's new auto-lacing Adapt BB sneakers caused a stir, as players around the league broke out the tech-laden smartshoe originally inspired by Marty McFly's fictional power laces in the 1989 movie "Back to the Future II."

As the designer of the Nike MAG explained it, all of that technology envisioned three decades ago for today's era almost exactly came to life in the brand's modernized version.

"The idea was adaptability from the very beginning," Tinker Hatfield said. "The notion of a shoe that recognizes you and turns on, then adapts itself to you, is not very different than what we're looking at right now. It didn't really change much."

For Jayson Tatum, the opportunity to debut Nike's new statement-level model in just his second season wasn't taken for granted, as he first tested out the shoe over the summer and helped with input along the way.

"I didn't know what to expect," the 20 year-old Celtic admits. "Hearing about a shoe with all this technology and no laces, I didn't know what it was going to look like. It really surprised me. It looked a lot better than I thought it would, and it felt great ... that was most important."

Across the country, four-time All-Star DeMarcus Cousins made his much-anticipated return to the hardwood, overcoming an Achilles injury suffered a year ago with a thunderous dunk during his first sequence as a Golden State Warrior.

After wearing Nike throughout his first eight seasons, Cousins became one of Puma's marquee signings for its return to the basketball industry. He unveiled a white-and-black-checkered flag edition of the brand's Clyde Court model for his first game back, inspired in part by rapper Nipsey Hussle's longtime mantra, "The Marathon Continues," with "DMC" lettering along the tongue. For Cousins, lending his own input and imagination to the shoe's design was part of the appeal of joining the brand.

"The biggest thing for me was just the creativity behind it," Cousins said. "It was a more genuine and authentic feel for me, and I like to pride myself on that same thing. Just that alone took it to the next level for me. The creativity is just through the roof. ... They like to do things wild and different. I'm kind of similar in those same aspects."

After also returning from injury, Atlanta Hawks forward Taurean Prince has continued his run of wearing decade-old sneakers from LeBron James' Nike line, as he matched his team's baby blue retro-nights jerseys with the gradient blue "All-Star" edition of the LeBron 6 from 2009. Good friend and fellow sneaker rotator Montrezl Harrell of the LA Clippers took notice.

"I told him he better slow down," Harrell said during an episode of Nice Kicks' "Sneak Peek" series. "He's bringing out a lot right now. ... It's a long 82!"

Harrell, who often switches his sneakers at halftime to try to show off even more of his collection, was spotted in a wheat lifestyle colorway of Kevin Durant's sixth signature model, while longtime league icon Vince Carter debuted yet another new colorway of his Nike Shox BB4 Retro in a Hawks-matching baby blue and red.