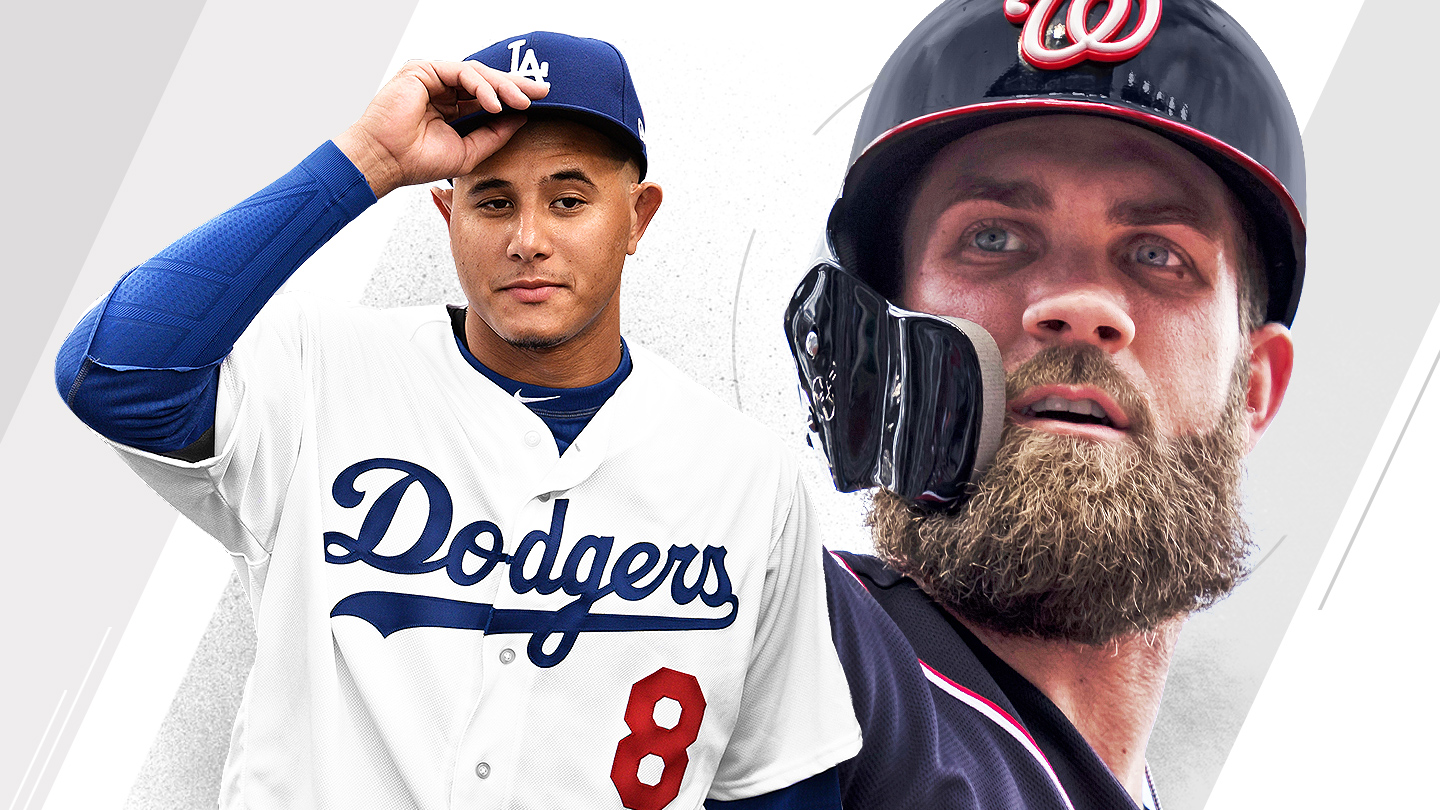 One of the great misnomers of the baseball lexicon is the offseason. There is no offseason anymore. The World Series leads immediately to critical roster decisions and contract options, including that of Clayton Kershaw. Then come the GM meetings, relentless trade talk, postseason awards, Hall of Fame voting, an apocalyptic free-agency season and the winter meetings, which, appropriately, will be held this year in Las Vegas. The offseason used to end with the meetings, now it extends virtually until Opening Day: Remember, free-agent slugger J.D. Martinez, didn't officially sign with the Red Sox until Feb. 26.

Here are 10 storylines to watch ahead of the 2019 season:

10. Bullpenning and openers. The rousing success of the Tampa Bay Rays, followed by the A's and Brewers, likely will have other teams examining the philosophy of starting a relief pitcher, letting him go an inning or so, then following with six or seven other relievers (or even a starting pitcher or longman for multiple innings). The Rays, out of necessity, made it work for a full season. The Brewers made it work for a portion of the postseason. This devaluation of the starting pitcher is a troublesome trend, but, out of necessity, some other teams might follow that lead heading into the 2019 season, which could have an effect on the free-agent/trade market. There is support from advanced metrics on this. But it's also possible that, with every team having the same advanced metric information, and possibly a similar approach, the best way to separate from the crowd is to go back to the old-fashioned way: trusting the eyes and ears and instincts of our best baseball men, as the Red Sox do with manager Alex Cora.

9. Awards season. These might not be as close as once thought. MVP: likely Mookie Betts and Christian Yelich. Cy Young: likelyBlake Snell and Jacob deGrom. Rookie of the Year: likely Ronald Acuna Jr. and, in an extremely close vote, Miguel Andujar. Manager of the Year: likely Brian Snitker and a three-way race between Bob Melvin, Kevin Cash and Cora. The awards will be interesting and perhaps landscape-changing because, if Snell wins, he will have the fewest innings pitched (180 2/3) by any starting pitcher in a full season since the Cy Young was first awarded in 1956. But, the rest of his résumé is tremendous, including this: He allowed one hit (45 at-bats) with a runner on third base this season. And if deGrom wins, he'll have the fewest wins (10) and the second-worst winning percentage (.526) of any starting pitcher to win the award.

8. The Hall of Fame. This is the final year on the ballot for Edgar Martinez, whose average (.312), on-base percentage (.418) and slugging percentage (.515) are matched in history by only seven players. Martinez received 70.4 percent of the vote last year, so he might make it this year. Mike Mussina (63.5), Roger Clemens (57.3) and Barry Bonds (56.4) likely will get another boost this year, also. Among the first-timers on the ballot are Roy Halladay and Todd Helton, each of whom has credentials for Cooperstown. And, of course, the No. 1 new player on the ballot is Mariano Rivera, the greatest closer of all time, and there isn't a close second. There are those who believe he will be the first unanimous choice for the Hall. But even in this more enlightened time of voting, it's hard to imagine anyone will be unanimous. If Willie Mays and Hank Aaron weren't, no one will be.

7. The arms race. Not pitching arms, but the race between the superpowers of the American League, the Red Sox, Astros and Yankees. They each won 100 games this year, the first time any league has had three 100-win teams. The Red Sox and Yankees have money to spend, especially the Yankees, because they have pared so much payroll the past few years. To keep up with one another, each is going to do whatever it takes to succeed, be it through free agency, trades, international signings, whatever. The Red Sox have their own free agents in Craig Kimbrel and Nathan Eovaldi. The Yankees have to replace injured shortstop Didi Gregorius, at least until, say, June. The Astros have free agents Marwin Gonzalez, Dallas Keuchel and Charlie Morton. If any of these teams lose a key player, they will surely sign or trade for replacements.

6. Labor relations. There has not been a work stoppage in baseball since 1994-95. In the early 2000s, influential players such as Tom Glavine helped lead the way to labor peace, which has been crucial. But things have changed. The two sides are no longer working closely together for the good of the game. Last year's slow-moving free-agent market, more than anything, was emblematic of that change, greatly angering the Major League Baseball Players Association and signaling a new way of teams doing business. It seems this winter will be critical for the two sides to start talking, negotiating and mending relationships, otherwise there might be significant trouble when the collective bargaining agreement expires after the 2021 season.

5. Clayton Kershaw. He has two years and $65 million left on his contract. He can opt out, if he chooses, though I think the Dodgers will extend his contract even if he doesn't. He is still a really good pitcher, but he is not the Kershaw of three years ago. He doesn't throw it by hitters any longer, and, due to injuries, he has averaged just under 25 starts the past three seasons. He's 30 years old, his best years clearly behind him. But he is not driven by money. He loves pitching for the Dodgers, and, as he didn't give them exactly what they needed this year, it seems unlikely he would look for more money elsewhere. That comes with one warning: He is from Texas, the Rangers need a starting pitcher and they are getting a new ballpark in 2020. Kershaw going home is the only scenario that makes sense beyond him not opting out and trying again to win a World Series for the Dodgers.

4. The free-agent starting pitching market. In this era, when they aren't valued as they once were, it could be a disappointing market for some starting pitchers. But not for Eovaldi, 28, who throws 98 mph with a 94 mph cutter in whatever spot you place him in a game. His work in the postseason for the Red Sox will earn him a lot of extra money in free agency. Patrick Corbin, 29, a great athlete with a great slider, will get a huge deal also, and he appears to be exactly what the Yankees need. And there are others with value, including Keuchel, Morton and J.A. Happ. But with our young, brilliant, remorseless, relentless general managers, who have a value placed on every player in the game, they are not likely to overpay, in years or dollars.

3. The reliever market. Last year, when the free-agent market perhaps changed forever, the first players to get paid, and paid relatively well, were relievers. It is a bullpen game today, and the more appearances you can make and the more roles in which you can pitch, the more value you have. Closers like Kimbrel are going to get paid, but so are Andrew Miller, Zach Britton, David Robertson, Adam Ottavino, Kelvin Herrera and others.

2. Manny Machado. He is a spectacular talent, a brilliant defensive third baseman who proved this year that he is a well-above-average defensive shortstop. He is 26; he plays a premium defensive position; and he has a great track record for production and durability. But he also proved, more than once, in the 2018 postseason that he can become a petulant child who often doesn't run out ground balls and celebrates at home plate even when one of his deep fly balls doesn't leave the park. His conduct will make teams wonder whether he's worth $30 million a season. Still, the Yankees, Phillies and Dodgers could use such a talent.

1. Bryce Harper. Five years ago, we assumed that, by the fall of 2018, Harper would be a generational player with an unprecedented track record that included multiple MVPs, a World Series ring and a guarantee of 500 home runs, all of which would mean a $400 million to $500 million contract. That day has not yet arrived. Harper, who soon will turn 26, is a tremendous talent with an impressive résumé and will get paid a tremendous amount of money by the Phillies, Dodgers, Cubs or some other team, but it's probably not going to be close to $400 million. In this era of interchangeable pieces and movable parts, the matchups and the analytics, some teams might prefer two players at $15 million a year, or even three players at $10 million a year, rather than paying any one player $30 million per season.