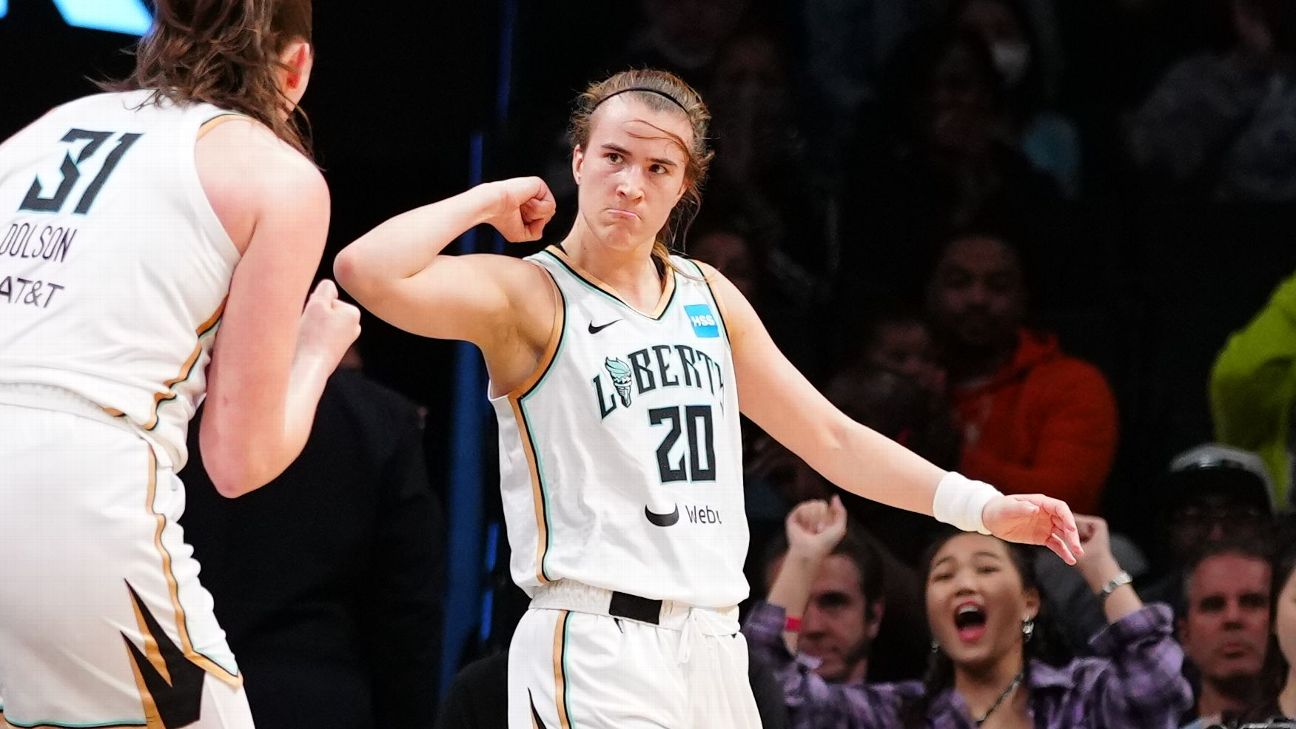 There is a clear difference between teams' demeanor following games they think they should have won versus losses that feel as if they are unstoppably piling up in a painful season. After the first kind of loss, players and coaches seem irritated; after the second, they appear defeated.

Following the New York Liberty's 88-86 loss to the defending WNBA champion Chicago Sky on Sunday, there was no mistaking how the Liberty viewed it. This was a victory they thought they should have had. After starting the season 1-7, the Liberty have gone 4-2 in the month of June and believe they can be a playoff team. Having been mostly in the WNBA's basement in May, the Liberty are moving on up.


New York jumped three spots to No. 8, which would be a playoff spot, in the Week 6 WNBA Power Rankings. The Liberty made the postseason last year, but it felt like they stumbled into it, losing eight of their last nine. A new coach for 2022 in veteran Sandy Brondello meant yet another direction for the Liberty, and at least for the first month, it looked as if this might be a long season in Brooklyn trying to get used to another system.

Yet starting June 1 against Indiana, something changed. Part of it clearly is the Sabrina Ionescu effect. Over the Liberty's past six games, while averaging 24.0 points, 6.8 rebounds and 6.5 assists, Ionescu has looked like the player New York was hoping for when it drafted her No. 1 out of Oregon in 2020. Ionescu had a triple-double on Sunday, and she almost certainly would have had another if she had played the fourth quarter in a blowout win over the Minnesota Lynx on Tuesday.

Brondello and husband/assistant Olaf Lange have enjoyed working with Ionescu. Brondello said that Ionescu, who missed all but three games her rookie season after a severe ankle injury, is finally feeling closer to 100 percent healthy, and the results are evident. Ionescu averaged 11.7 points and 6.1 assists last season, but she now looks like she's at another level, averaging 17.5 points, 5.6 assists and 6.2 rebounds.

"This entire season has been fun for me," Ionescu said. "Just back to being able to do what I'm capable of and doing it healthy. It's something you don't think about much when you've been healthy your whole career, but I've had to learn how to deal with it. I'm really excited about the fact that I'm able to play at this level."

Veteran center Stefanie Dolson, in her first season with New York, said of Ionescu, "The thing that I'm most impressed with would be her poise. Teams are throwing a lot at her when it comes to defense -- whether it's trapping, hedging, switching big posts onto her -- whatever it is, she seems to stay poised and make good decisions."

The Liberty also have seen a surge in play from center Han Xu, who wasn't quite ready for the WNBA when, at age 19, she played 18 games in 2019. The fan favorite is now far more comfortable at this level and is averaging 10.6 points and 4.7 rebounds while bringing a hard-to-match 6-foot-10 presence.

Guard Marine Johannes of France recently joined the Liberty, and she has played in two games. At 27, Johannes has plenty of international experience, and she also played for New York during the 2019 season. And Natasha Howard, expected to be an anchor for the Liberty, had her first double-double of the season on Friday.

The Liberty are still hoping to get DiDi Richards back from injury soon; she had been bringing endless -- and we do mean endless -- energy on the bench. Betnijah Laney and Jocelyn Willoughbyalso are out with injuries, and Laney isn't expected back until August, at the earliest. But while a couple of weeks ago it seemed like bad injury news was one of the defining clouds over the Liberty, it no longer seems that way.

Brondello knows a good streak like what the Liberty have been on can go cold quickly. Yet she sees confidence growing in her players.

"I think we've shown that we're pretty tough," the coach said Sunday after a late Courtney Vandersloot 3-pointer snatched the win away from New York for Chicago. "We were right there with a pretty good team. We still made some mistakes that we've got to tidy up. But we're right there."

The Aces are back on top of the Power Rankings after a week when they had time to rest and practice. They played just once -- an 89-72 victory at Los Angeles on Saturday -- and got a season-high 35 points from A'ja Wilson while holding the Sparks to 36.6% shooting. They did it without guard Jackie Young, who is still out with an ankle sprain. The only downside was the game was on the night that Aces coach Becky Hammon was inducted into the Women's Basketball Hall of Fame in Knoxville, Tennessee, so she missed the ceremony.

This week: at Dallas (Wednesday), vs. Minnesota (Sunday)

The Sky went 2-1 on their East Coast trip, the only loss being by two points at Washington. Most impressive was an 83-79 win at Connecticut in a rematch of last season's semifinals; posts Emma Meesseman and Candace Parker combined for 44 points, eight rebounds and nine assists against the inside strength of the Sun. Chicago also showed patience in getting the ball back to point guard Courtney Vandersloot in the closing seconds for the winning 3-pointer on Sunday at New York. Also good news for the Sky: Belgian guard Julie Allemand has joined the team, and she played in two games.

This week: vs. Atlanta (Friday), at Indiana (Sunday)

The Sun split their games last week, cruising over Indiana before falling to Chicago. Reigning WNBA MVP Jonquel Jones had 14 rebounds against the Sky but a season-low seven points. It was the kind of loss the Sun can learn something from; as good as their post game is, the Sky's in this game was better. That isn't going to happen often to Connecticut.

This week: vs. Atlanta (Wednesday), vs. Seattle (Friday), at Washington (Sunday)

Previous ranking: 5
The Mystics went 2-1, with the 99-90 loss coming in overtime to Phoenix on Sunday. Elena Delle Donne played just seven minutes in Washington's victory over Chicago on Wednesday and didn't play in the Mystics' other two games. That's the way it is with her back issues; the Mystics will continue to err on the side of caution. With two Mystics games on national television this week -- including a rematch with Phoenix on Tuesday (7 p.m. ET, ESPN) -- hopefully Delle Donne will be back in action. Myisha Hines-Allen had her best back-to-back games of the season with a combined 35 points and 16 rebounds against Minnesota and Phoenix.

This week: vs. Phoenix (Tuesday), at New York (Thursday), vs. Connecticut (Sunday)

Considering what the Storm have been through this season with players missing time with COVID-19, this was a week to relish for Seattle. Three victories jumped the Storm up three spots in the Power Rankings. Breanna Stewart averaged 25.3 points and 8.7 rebounds in the wins, while Jewell Loyd averaged 22 points. This week, the Storm complete a five-game trip, which ends Sunday (noon ET, ESPN) as Storm guard Sue Bird makes her one regular-season trip back to her native New York.

This week: at Minnesota (Tuesday), at Connecticut (Friday), at New York (Sunday)

After a seven-game losing streak, the Mercury now have won three in row, including against Atlanta and at Washington this past week. That triumph on the road against the Mystics -- in overtime -- was exactly what the Mercury needed after so many tough moments this season. Diana Taurasi had a big weekend. On Saturday, she turned 40 and was present for wife Penny Taylor's induction into the Women's Basketball Hall of Fame. On Sunday, Taurasi had 20 points and six assists, and she added to her vast collection of technical fouls as the Mercury triumphed. We'll see how the rematch goes at Washington this week, but perhaps the Mercury have turned a corner.

This week: at Washington (Tuesday), at Indiana (Wednesday), at Dallas (Friday)

It was an 0-2 week for the Dream, but we'll cut them some slack for falling on the road at Seattle and Phoenix and with guard Erica Wheeler missing most of the first game and all of the second with an ankle injury. Rookie Rhyne Howard had 25 points against the Mercury, while Cheyenne Parker had back-to-back double-doubles. The Dream have had a good season so far, but this week brings two big tests on the road.

This week: at Connecticut (Wednesday), at Chicago (Friday)

Brondello pointed to "little things" that made the difference in Sunday's close loss to the Sky, including turnovers and missed rebounds in crucial spots. But the Liberty have done more right than wrong in recent weeks. It's also notable that guard Crystal Dangerfield, who was cut from Minnesota and appeared in three games as a hardship player with Indiana, seems to have found a home in New York. Dangerfield can take some ballhandling responsibility off Ionescu, she brings a UConn attention-to-detail mentality, and her personality has helped her fit in immediately with the Liberty.

This week: vs. Washington (Thursday), vs. Seattle (Sunday)

On Sunday, a professional basketball player claimed that because of her youth soccer past, her "first instinct" when a ball comes at her fast is always to stop it with her feet. Dallas coach Vickie Johnson wasn't having it, pointing out that Arike Ogunbowale has had two kicking incidents in recent weeks. Ogunbowale is a superstar-level talent, but must understand that handling frustration is part of the game. She likely truly didn't mean to knock the ball into the stands Sunday, resulting in an ejection. But whether it was irritation over her first-half shooting struggles, just a brief bit of carelessness, or both, the kick kept her from helping her team. After two tough losses to visiting Seattle, the Wings have the next three at home as well to get back on track.

This week: vs. Las Vegas (Wednesday), vs. Phoenix (Friday), vs. Los Angeles (Sunday)

What a week in La La Land -- but not in a good way. Coach/general manager Derek Fisher was fired Tuesday from a 5-7 team that had played nine of its first 12 games on the road. It's hard to know just what kind of start to the season the Sparks' management realistically expected, all things considered, so letting Fisher go seemed harsh. Longtime WNBA coach Fred Williams took over, but when the season is over he plans to fulfill his commitment to become an assistant at Auburn. In Williams' first game in charge, Los Angeles lost by 17 to powerhouse Las Vegas. Maybe the Sparks will band together and respond well to the latest franchise disruption -- or maybe the skid is just beginning.

This week: at Dallas (Sunday)

After five losses in a row, the Fever won the "battle of the beleaguered" Sunday, beating Minnesota. Rookie NaLyssa Smith had the best overall game of her young career, with 21 points on 8-of-10 shooting, 14 rebounds and four assists. The key for Indiana remains helping the young talent grow.

This week: vs. Phoenix (Wednesday), vs. Chicago (Sunday)

Things have gone from bad to worse for the Lynx, as center Sylvia Fowles -- who is playing her final WNBA season -- is out indefinitely with cartilage damage in her right knee. Fowles was having a very strong season individually, even if the Lynx have struggled as a team. With Kayla McBride also out Sunday (foot injury), the Lynx lost at home to Indiana and moved to the bottom of the Power Rankings after a 0-3 week. After so much success the past decade-plus, the Lynx were probably due for a tough season, and it looks like this is it.

This week: vs. Seattle (Tuesday), at Las Vegas (Sunday) 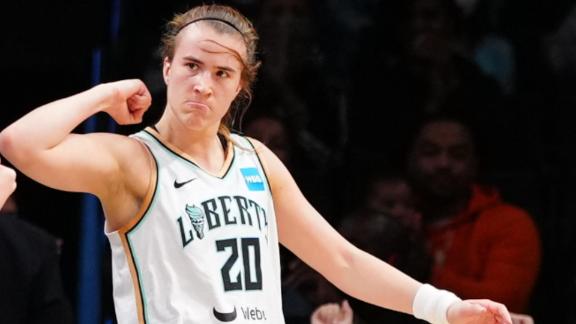 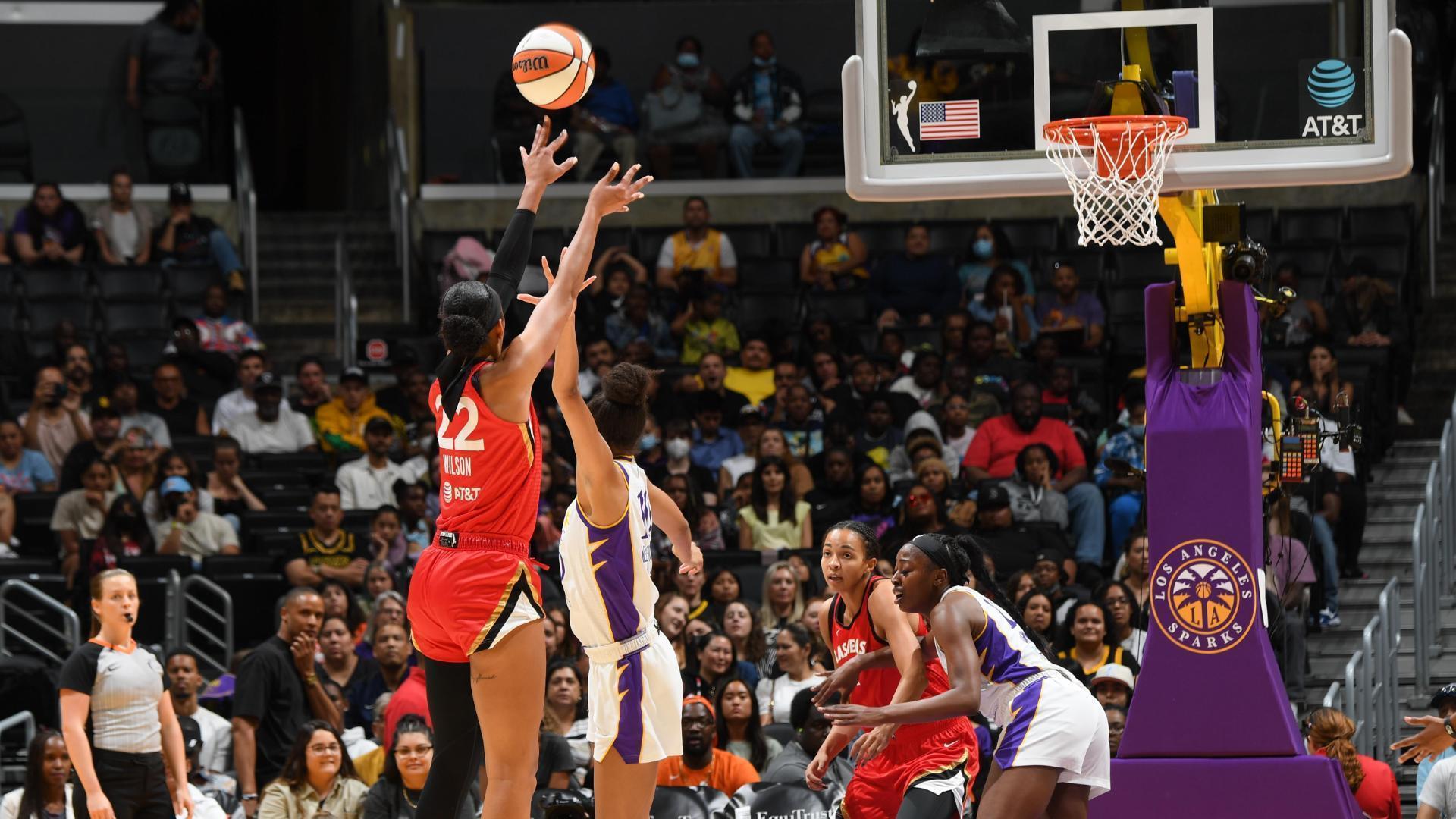 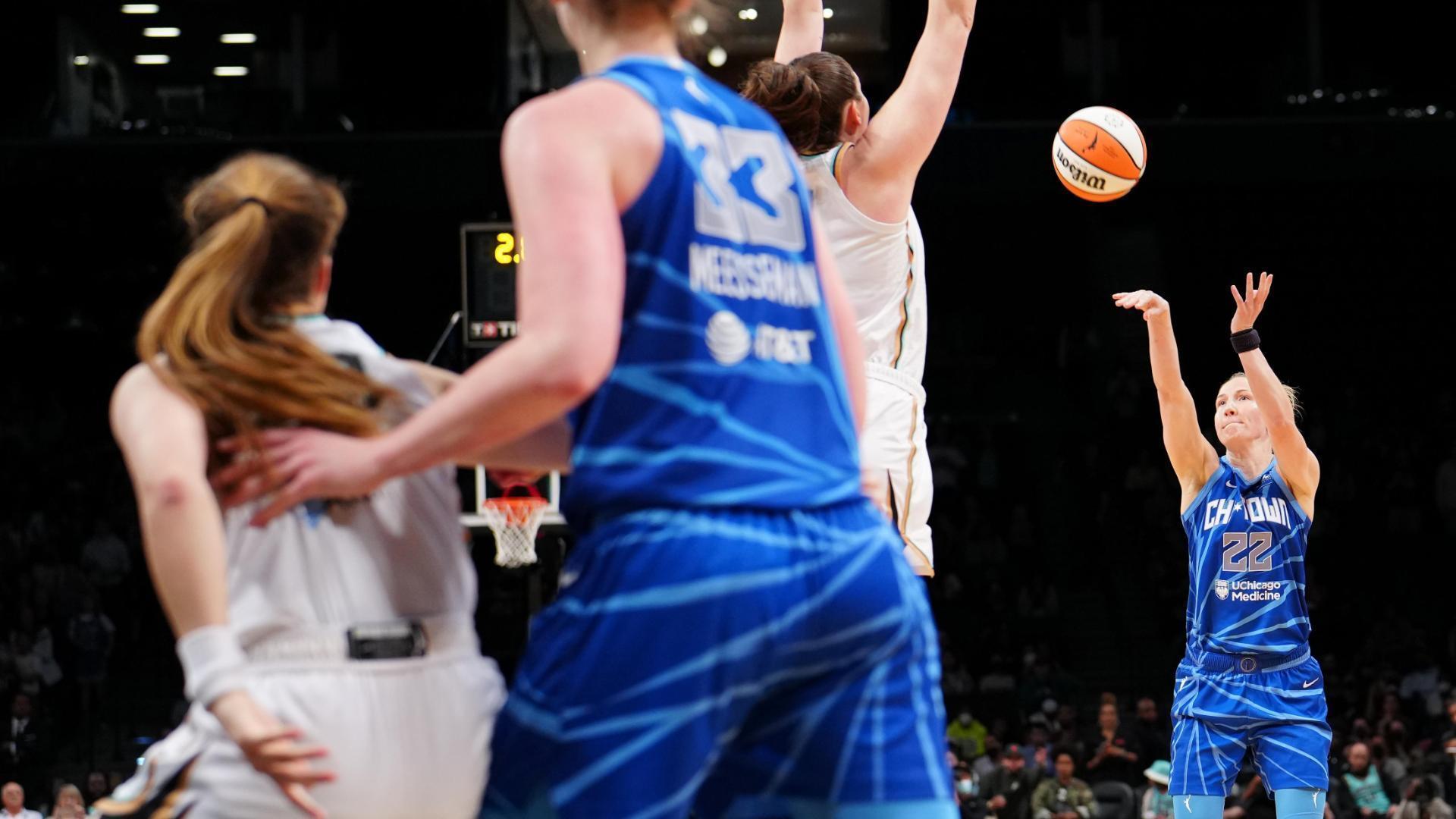 Last-second 3-pointer from Vandersloot wins it for Sky
Chicago takes down New York in the last second of the game with a trey from Courtney Vandersloot. 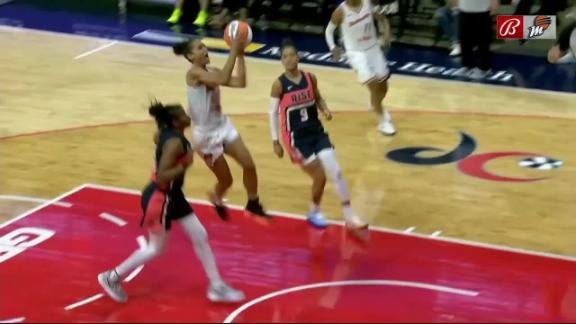 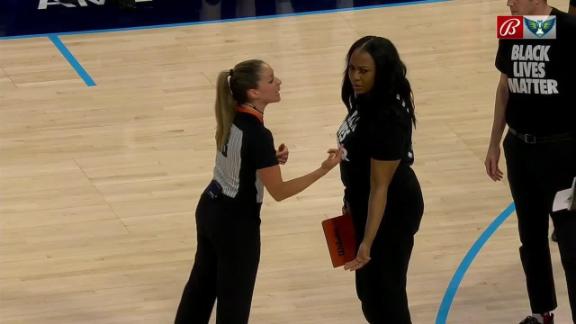 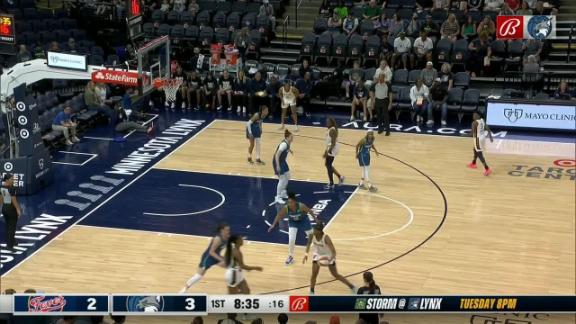 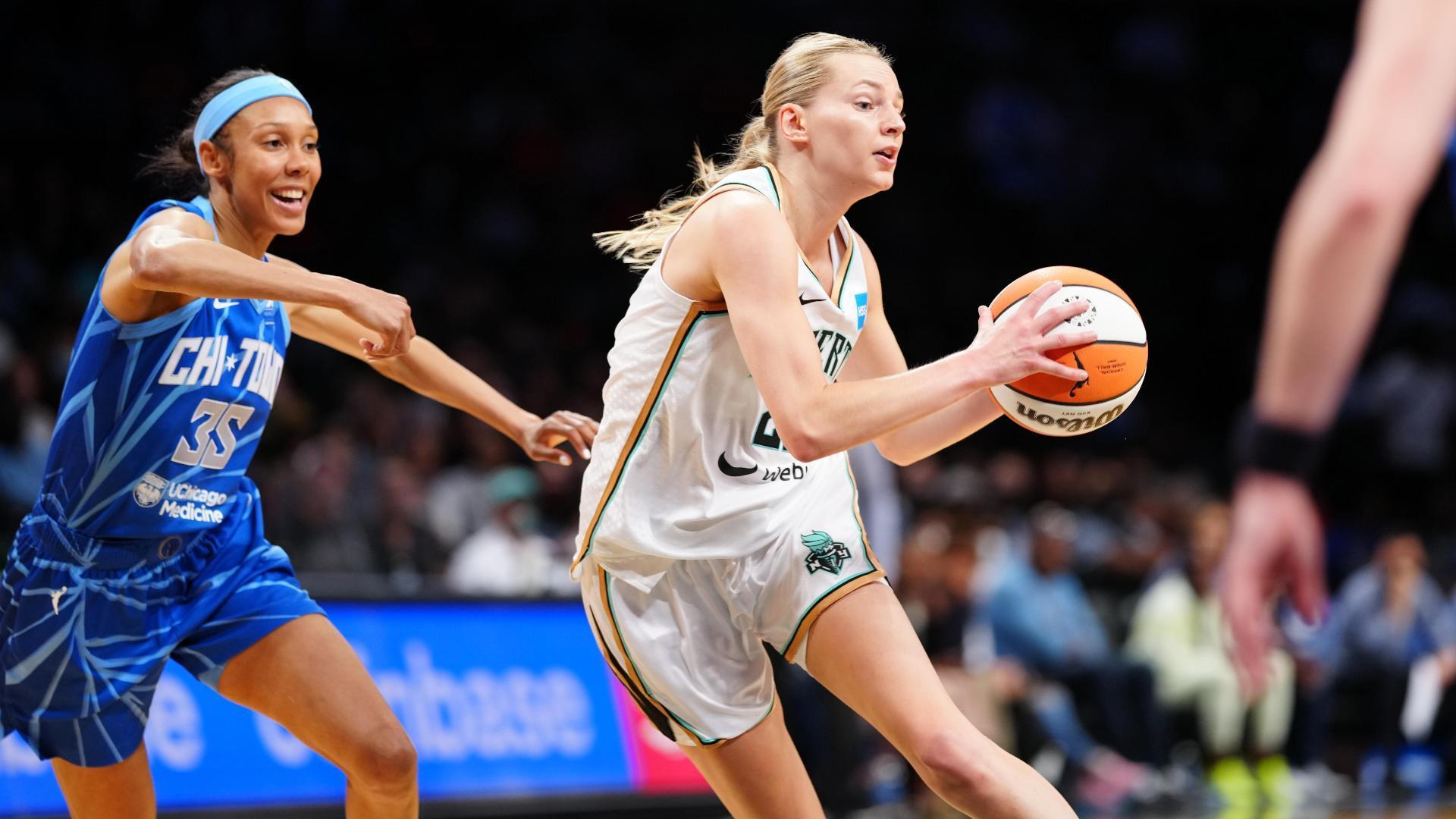