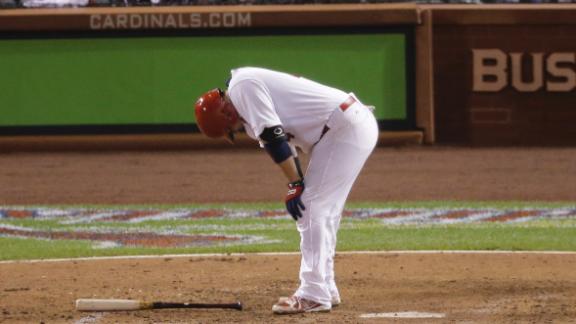 ST. LOUIS -- Yadier Molina made contact and barely budged from the batter's box. He hunched over in pain as the San Francisco Giants turned an easy double play.

Cardinals manager Mike Matheny and a trainer came out to meet Molina, who walked gingerly off the field with a strained left oblique muscle.

By the time St. Louis finished celebrating a 5-4 win Sunday night that tied the NLCS at a game apiece, Cardinals players were turning their attention to the status of their All-Star catcher.

"You can't say enough about what he does for our team," third baseman Matt Carpenter said. "The way he handles our pitching staff and the leader that he is ... It's disappointing not having him out there. It's not ideal."

How much time Molina might miss wasn't yet known.

"We don't know much more about it right now," Matheny said. "He's out getting some looks right now from the doctors. And we'll know later. But didn't look real good."

Molina was not in the clubhouse after the game and was not available for comment.

Molina, who missed seven weeks this season due to a thumb injury, has won six straight Gold Gloves and finished third in NL MVP voting the past season. His loss would be a huge blow for the Cardinals, who are trying to win their second consecutive NL pennant.

In the second inning, Molina got his 89th career postseason hit and passedAlbert Pujols for the team record. Molina was 1-for-2 with a sacrifice bunt before leaving.

The 32-year-old Molina is one of the best catchers in baseball; he has thrown out 45 percent of would-be base stealers over his career. He is also a middle-of-the-order threat for a team that struggled to score during the season. He hit .282 with seven homers despite missing 52 games this year.

Molina tore a ligament in his right thumb July 9 while sliding into third base. St. Louis went 21-19 during his absence.

The Cardinals signed A.J. Pierzynski, who shared catching duties with Tony Cruz until Molina got back. Pierzynski was left off the roster for the NL Division Series but was added for the NLCS.

"Whatever they need me to do, I'm ready for," Pierzynski said postgame Sunday. "I've been here three months. I hope I'm comfortable by now."

Molina was replaced by Cruz in the top of the seventh inning Sunday with the score tied 2-all. Cruz's passed ball helped the Giants go ahead, but St. Louis tied it in the bottom of the seventh on a homer by pinch hitter Oscar Taveras and then went ahead on Matt Adams' homer in the eighth.

With the Cardinals clinging to a 4-3 lead in the ninth, Cruz made an awkward, backhanded stab at Trevor Rosenthal's tricky, wild pitch. The ball bounced away, Cruz had trouble finding it and pinch runner Matt Duffy raced all the way home from second base.

Matheny said Molina "felt a little something" in his first at-bat. The manager said that was taken into consideration when Molina dropped a sacrifice bunt with two on and none out in the fourth. Molina had just one sacrifice bunt in the past two regular seasons.

"We were hopeful that the next at-bat things would loosen up a little bit, but obviously that wasn't the case," Matheny said.

Matheny said the Cardinals will have to learn more about Molina's injury before deciding whether to replace him on the NLCS roster. If they decide to do that, he would be ineligible for the World Series.

"If we have to go short with an opportunity to have him back, we'd do that," Matheny said. "But we will cross that bridge when we get to it."

Matheny continued: "I do have to say we have one of the toughest human beings I have ever seen that we're talking about right now. ... I do know that if there's any chance, if there is anybody that could play with any injury, it would be Yadi."

The Associated Press and ESPN.com's Jesse Rogers contributed to this report.