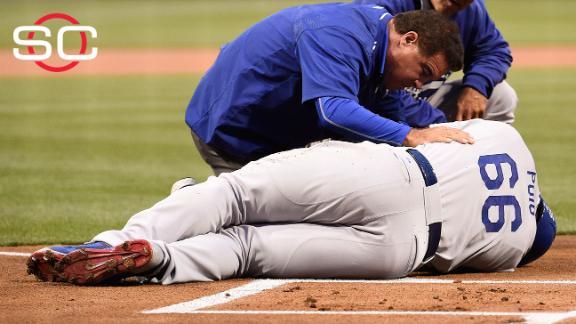 Puig, who missed four games earlier this season with a tight left hamstring, came up limping after grounding out to third base in the sixth inning. He was replaced in right field the following half-inning by Andre Ethier.

He also was struck in the left knee by an Andrew Cashner fastball in the first inning, but he stayed in the game.

Puig left the clubhouse before the media was allowed in, and the team offered little guidance as to the severity of the injury. Dodgers manager Don Mattingly said he was told the injury was lower in Puig's leg than the previous one, but he said he was hopeful it wouldn't require him to go on the disabled list.

"I don't know a whole lot right now and I don't know that it's too serious," Mattingly said. "We'll find out tomorrow."