Young: $100K worth of items stolen 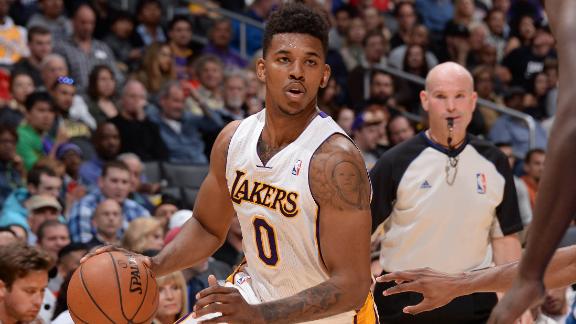 EL SEGUNDO, Calif. -- Los Angeles Lakers guard Nick Young said close to $100,000 in clothing, shoes, jewelry and luggage was stolen from his Los Angeles area home while he was playing in a game at Staples Center.

Young said he returned to his Sherman Oaks house after the Lakers' 103-94 win Sunday over the Orlando Magic to find an upstairs window broken.

"I came in, I seen my drawers and everything open and clothes all over the floor and the glass was broken from the window," Young said after Lakers practice Monday.

"I think they knew that I had a game that day, I think they scoped it out a little bit. Obviously they knew nobody was in the house and they knew we had a game. So, they came at the right time."

The 28-year-old said he called police and checked into a hotel after discovering the robbery.

Young said he has homeowners insurance, but there was one item he seemed particularly disappointed to be missing.

Young was referring to the "Red October" Nike Air Yeezy 2 sneakers he wore to a game last week and showed off for TV cameras, telling reporters that they go for as much as $6,000 on the open market. Young, who goes by the self-appointed nickname "Swaggy P," is known for his extravagant outfits and was ranked No. 19 on GQ's list of the 20 most stylish athletes of 2013.

The seven-year veteran has made about $18.4 million in salary during his NBA career, according to BasketballReference.com.

Young said he called police around 2 a.m. and officers did not respond to the scene until between 4 a.m. and 5 a.m.

"I was just happy no one was in the house when they was breaking in," Young said. "It could have made it a lot worse."

Former NBA players Eddy Curry and Antoine Walker weren't so lucky, as they were in their homes when burglars arrived and held them up at gunpoint in separate 2007 incidents.

"I'm just glad that I didn't have to be in that situation, really," Young said. "I don't know what I would have did. I was just shocked they tried to get Swaggy yesterday."

"I'm going to have to get a guard dog or something," Young said with a laugh.