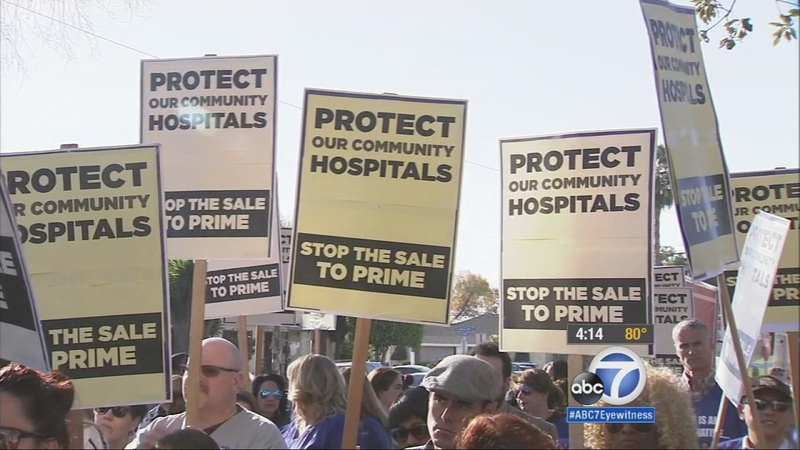 LYNWOOD, Calif. (KABC) -- Health care workers rallied together at a hearing Monday regarding the sale of St. Francis Medical Center and other hospitals to Prime Healthcare Services.

"They bought Centennial [Hospital] in 2007. They closed the departments, the psychiatric and maternity departments. I think that would affect us also if they were to buy us. That would be jobs and it would also affect the community - they expect that from us, they expect us to take care of them," said Issac Rodriguez, a member of the United Healthcare workers union.

United Healthcare workers support Bule Wolf Capital Partners, Inc., a private equity firm, to purchase St. Francis Medical Center and five other hospitals. The union said Blue Wolf has said there won't be any layoffs or service cuts if it were to purchase the hospitals.

But the California Nurses Association, which has negotiated a new contract with Prime Healthcare, is pushing for the approval of the sale.

The association said the for-profit hospital chain is the lifeline St. Francis needs to keep its doors open.

"We're here because we love our jobs, we love doing it and taking care of our patients. We want them to be taken care of properly, and that's our main goal is to take care of them properly," said Jackye Rogers, member of the California Nurses Association.

St. Francis and its five other sister hospitals are struggling financially. The groups are losing millions of dollars a month and are on the verge of bankruptcy.

Because the hospitals are non-profit and would be sold to a for-profit company, the final approval must go through the state attorney general's office. The decision is expected sometime in February.