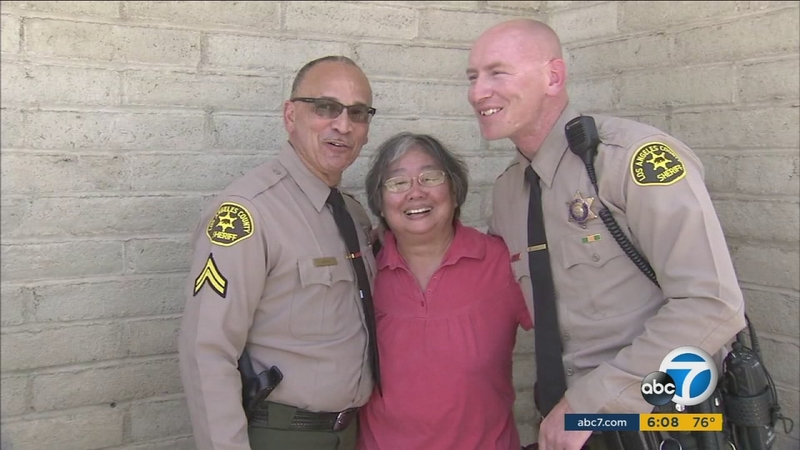 SANTA CLARITA, Calif. (KABC) -- A woman thanked two Los Angeles County sheriff's deputies who pulled her out of her burning Stevenson Ranch home over the weekend.

As the Sage Fire was burning close to her home Sunday around 6 a.m., deputies Alex Smith and Shane Dobra pounded on Marilyn Kishi's front door to evacuate her and her neighbors. It turns out the fire was already burning part of her home.

"I'd already seen the fire. It had already taken over the back, and I didn't think there was a second point so I knew I had to kind of push through that first door," Dobra said. "The fire was already starting to move around the frame of the door so I started pounding on the door."

Kishi answered the front door and that's when she learned her home was on fire. But instead of leaving with the deputies, she went back inside to get her glasses.

On her way to get them, she fell and that's when the two deputies helped her up and got her out of her burning home.

"I was walking out the door, I heard the glass breaking on the window. That's when it really struck me that oh this is really serious," she said.

Once the deputies got Kishi out of her home safely, their big concern was if anyone else was in the home. Luckily, a neighbor confirmed to them that she lived in the home by herself.

The damage to the side and back of the house is extensive. Kishi suffered some smoke inhalation and a bump to her knee, but she said she is grateful the deputies got her out in the nick of time.