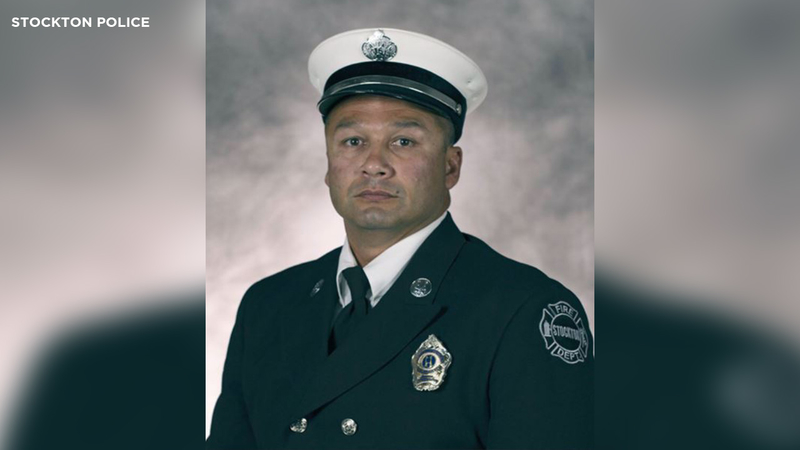 Stockton fire captain dies after being shot while battling fire

STOCKTON, Calif. -- Hundreds of North Valley firefighters and officers paid their respects after a fire captain was shot and killed on the job Monday.

An investigation is underway and 67-year-old Robert Somerville is now in custody.

Somerville was booked into jail Monday night and is facing murder charges.

Stockton Fire Department Chief Rick Edwards shared a message directly to his firefighters as he announced 47-year-old Fire Captain Vidal "Max" Fortuna was shot and killed while on duty.

Our first look at Stockton Fire Captain Vidal (Max) Fortuna who was shot and killed while working this morning. The husband and father of two has been with the department for 21 years. @ABC30

"My heart breaks with you, but we will get through this," Stockton Fire Department Chief Rick Edwards said to his firefighters during a press conference Monday morning.

The 21-year veteran was a husband and father to two grown children.

"We're a small community," says Fresno Fire Battalion Chief Brian Price. "We know folks up there, our hearts are broken."

Firefighters carried his flag-draped casket inside.

"Max was a firefighter who showed up every day and never complained about being on the job," said Mario Gardea, the president of the Stockton Firefighters Union 456.

It was just before 5 in the morning when firefighters responded to a dumpster fire close to a building at Washington and Aurora Street.

Authorities say a Stockton fire captain died after being shot while battling a fire on Monday morning.

Officials say, as they were trying to put out the fire, shots were fired.

They also recovered a firearm at the scene.

He believes this was all a terrible accident.

"First off, I want to say my condolences to the firefighters' family. Like it's truly, I could not even, I would not even want to be in that situation right now," said Somerville III.

He said his dad uses the building for a variety of things, but mainly, to build food trucks.

He said his father works late hours and, many times, falls asleep at the shop.

The warehouse, so large, Somerville III said it's impossible to hear someone knock on the door.

He thinks his dad may have been startled awake and was trying to protect himself.

"It's my understanding that my dad thought someone was breaking in," said Somerville III.

Action News reached out to the Stockton Police Department to see if the suspect they have in custody will be arrested and, if so, what charges he will be booked on.

Officials say they're still working with the district attorney to make that determination.

Fire agencies across the region are becoming a shoulder for Stockton to lean on.

A fundraiser has been started for Fortuna's family, which can be found here.