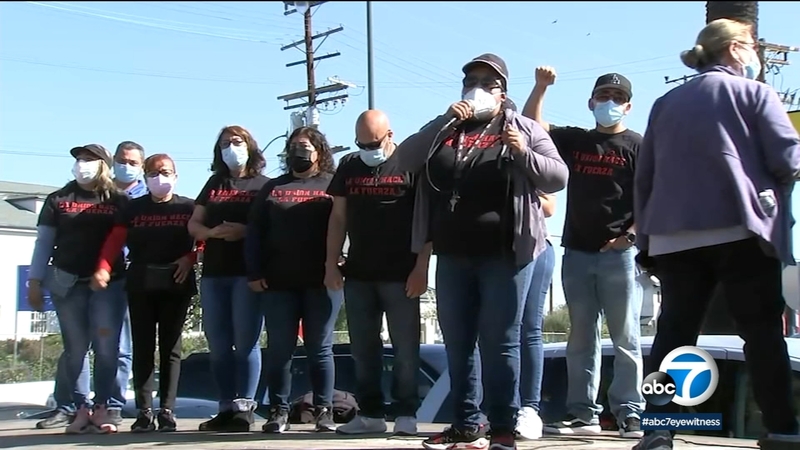 "Just by seeing them on the picket line, it makes you strong," she said of the now months-long strike at a rally Thursday. For 15 years, Castillo has decorated cakes that end up at retailers like Baskin Robbins, Cold Stone Creamery, and Safeway.

Some supply lines finish as many as 36 cakes per minute, said Castillo. "Our line is between 12 and 11 per minute," she added. Roughly 100 workers are on strike, while a few dozen continue to working, according to the union that represents the workers, Bakery, Confectionery, Tobacco Workers, and Grain Millers (BCTGM) International Union Local 37.

In April, Maria Palomo will have worked at the company for 22 years. She said the long, fast-paced work is tough on her hands, and believes they deserve a fair raise given increased demands for production. They're asking for a $1 per hour increase each year for three years. "It's a union contract and some workers have been there for about 19 years and they're still making $17.80 an hour," said Miguel Perez of the current wages.

Several lawmakers including U.S. Senator Alex Padilla and Congresswoman Linda Sánchez are supporting the workers -- predominantly Latina women -- urging the company to reach a fair agreement as soon as possible. Sanchez's letter cited a study that suggested that in Los Angeles, a single adult must make $19.35 an hour to support oneself, and more if they have children.

Rich Products Corporation told Eyewitness News that workers at the Santa Fe springs factory, Jon Donaire Desserts, make on average $18.21 an hour, and that its offer included a $1.60 cent per hour raise over three years, stressing it's a family owned company that provides workers with competitive wages and high-quality benefits.

A statement reads in part:

"Rich's associates, many of whom are multi-generational and average 10 years of tenure at the plant, currently have a platinum health-care plan, up to 38 days of annual paid time off; and a company-paid pension plan. The company recently presented its last and final contract offer that would have retained all that, and also included wage increases for each of the three years of the next contract."

While the company said its offer includes increasing the percentage of pays for employees health insurance, the union -- which does not dispute the company provides good benefits -- said that under one offer that includes the $1 raise, workers would have to pay more out of pocket for health insurance, essentially losing the raise.

The two parties have appealed to the National Labor Relations Board and for now there is no date to continue negotiations.