A new bright orange mural in the City of Bell, that reads 'SELA STRONG', was a gift from local artists in the Southeast Los Angeles area to the community as a message of unity and resilience.
KABC
By Eric Resendiz 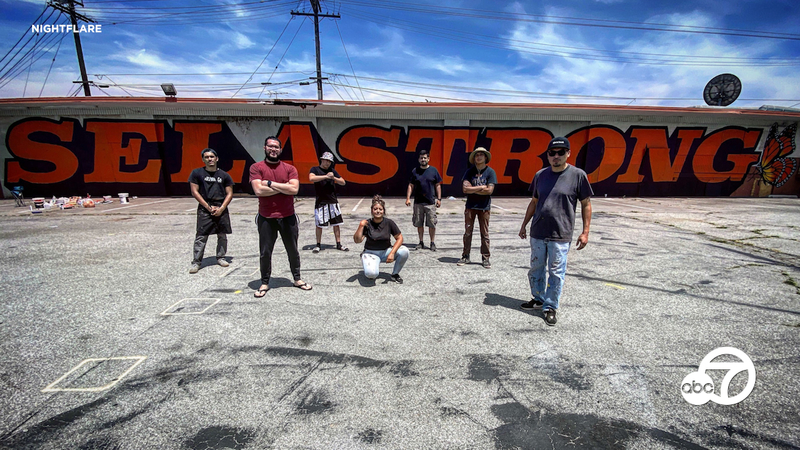 BELL, Calif. (KABC) -- A new bright orange mural in the City of Bell, that reads 'SELA STRONG', was painted in late May by local artists in the Southeast Los Angeles area for the community as a message of unity and resilience.

"As a reminder that we are all a community and we need to stay strong together as a community," said Amelia Valencia, a Cudahy resident and one of the artists who painted the mural. "Especially in times like this."

The project was put together by muralist Hector "Tetris" Arias, a resident of Bell.

Arias said he needed to do something for the community following events in the area since January like the Delta jet-fuel dump and COVID-19.

"And then from there, we had...the murder of Floyd by police. In this community we also have a big history of police brutality and injustice," said Arias. "I felt this was something that was going to uplift our community and empower them."

The mural measures 12-feet high, is more than 100-feet long and stands near the corner of Atlantic and Gage Avenue.

Arias said he specifically chose this location knowing it's a COVID-19 testing site.

Local leaders in Southeast Los Angeles gathered in front of the mural to take a picture and share a strong message to the community.

"This mural here inspired me to get the strongest Southeast leaders together. And together on that day in front of this mural, we decided to take a regional approach to stand with our black and brown brothers and sisters," said Lisseth Flores, mayor pro tem of Bell Gardens. "We decided to take the approach to change all of the policies and metrics that are necessary to end racism within our communities."

Valencia was the only woman among the group of artists who helped paint the mural.

"It helps you know bring up a confidence boost," said Valencia. "We need women to step up and make changes as well."

The artists said they hope the community also notices the lack of art in the area and the importance of having it.


"Southeast LA will be going through a lot of changes in the near future. The city is changing here," said David Martinez, a Bell resident and one of the artists who painted the mural. "I want to make sure the arts are part of that change and the arts are highlighted by the public, by our own city."