Super Bowl 2020: LASD heading to Miami for security preparations ahead of SoCal game in 2022

KABC
By and Lisa Bartley 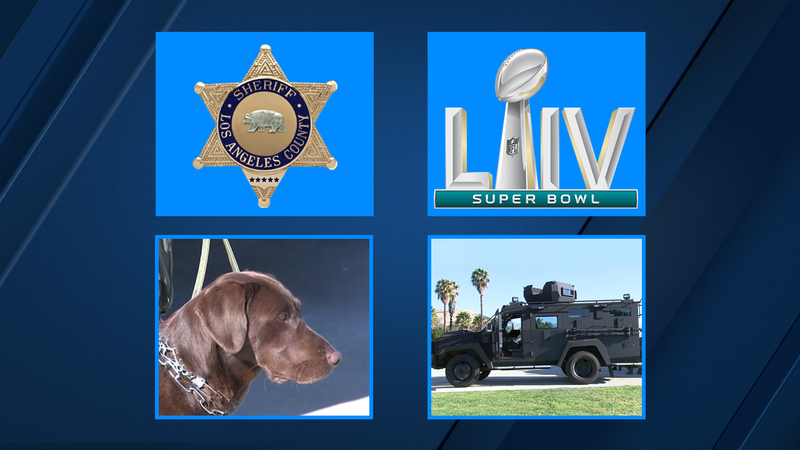 Super Bowl security: LASD prepping ahead of 2022 game in SoCal

INGLEWOOD, Calif. (KABC) -- Two years from now, Super Bowl 2022 will touch down in Southern California at the SoFi Stadium in Inglewood. However, the Los Angeles County Sheriff's Department and Inglewood police are already preparing for the big game and the massive security operation that comes along with the cheering crowds.

"It's a national security event when you're talking about the Super Bowl, so it's important to collaborate with the city of Inglewood and the NFL to ensure we have enough assets," LASD Chief Jim Hellmold told Eyewitness News.

Sheriff Alex Villanueva was originally part of a 10-person contingent from the department heading to Super Bowl LIV in Miami next week to take note of security operations. On Friday, however, he pulled out of the trip, citing a family emergency.

Chief Hellmold, Assistant Sheriff Robin Limone and seven other highly specialized members of the department will shadow their counterparts with Miami-Dade Police and other law enforcement agencies providing security at Super Bowl 2020. The NFL requires local authorities to begin planning for the event two years in advance.

"Disciplines such as arson-explosives, special weapons, emergency and tactical planning to ensure a safe event both on the premises and coming to and from," Chief Hellmold said.

Eyewitness News got a first-hand look at some of the specialized equipment that will be deployed by the LASD in 2022 and is already being used for other high-profile events here in Southern California, including Chargers games.

"You pretty much have to plan for anything," says Special Enforcement Bureau Team Leader Sgt. Russell Boucher. "Anything from a terrorist, we have to plan for the worst, all the way down to a potential hostage rescue, vehicle bombs, vehicle barricades - any such emergency that's going to require our assistance."

The Inglewood Police Department will be the lead agency when it comes to security for Super Bowl 2020, but LASD will provide much of the planning and personnel.

"Although we're all police officers -- we both have SWAT teams -- we might have different techniques or tactics, or ways to handle situations," said Deputy Kevin Hilgendorf of the LASD's Special Enforcement Bureau. "So, we have to now coordinate that because we're all going to be working together and we need to be on the same page."

Detective Mark Seibel works with "Boomer," the only police dog in the country trained to detect the precursor materials of chemical or biological weapons.

"Boomer would not be used for chemical or biological weapons that have already been disseminated," says Detective Seibel. "He's looking for something that's still in a dispersal device, so something that's hidden and hasn't gone off yet."

"Rosie" is another one of the LASD's specially trained canines.

"She works the Rose Bowl, she works the Golden Globes, so she is very familiar with large events," Sgt. John Hanson said.

The department expects the training trip to the Super Bowl in Miami and events leading up to it to cost about $30,000, but says "there is no price tag when talking about safety," and that the money comes from a pool of funds set aside for travel and training.

We asked about critics who say the trip may appear to be a boondoggle - just a free trip to watch the Super Bowl.

"Do we enjoy our job? Yes, absolutely we do," Hellmold said. "But our focus will be on learning best practices to provide for a safe experience when fans and patrons come to Inglewood."