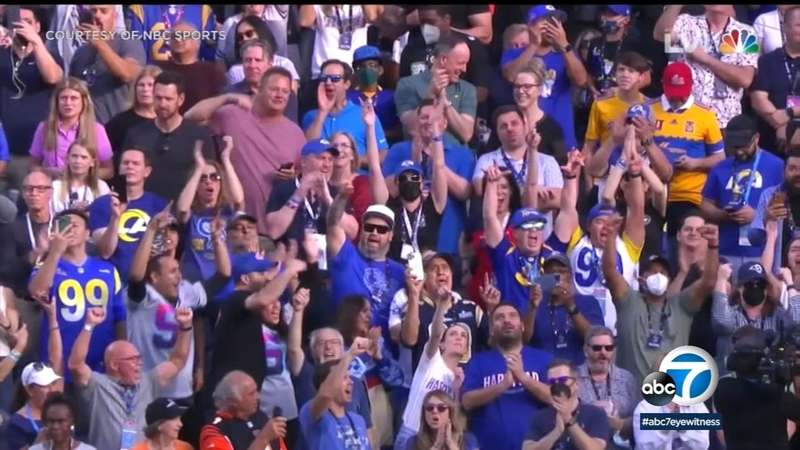 Despite mandate, many fans enjoyed Super Bowl without a mask

INGLEWOOD, Calif. (KABC) -- Every fan who attended Sunday's Super Bowl at SoFi Stadium was given a KN95 mask as face coverings are still mandated by the county at large outdoor events, but it looks like many fans didn't quite follow the rule.

The vast majority of people appeared to have ditched their masks during the game.

The broadcast captured many celebrities without a face mask, including Jay-Z, Matt Damon, LeBron James, Jennifer Lopez and Ben Affleck.

ABC News teams inside the stadium said they did not see any mask enforcement.

Two weeks ago, the vast majority of fans attending the NFC championship game at SoFi Stadium between the Los Angeles Rams and San Francisco 49ers were seen on camera ignoring the mandate.

READ ALSO | Garcetti: '0% chance of infection' if he holds breath when removing mask for photo

The lax adherence to the mandate led one county supervisor, Kathryn Barger, to suggest that the mask rule be rescinded, since it apparently wasn't being followed anyway.

But the mask remained in effect for the Super Bowl, and stadium officials insisted they would enforce it. The rule requires masks at all times, except when "actively" eating or drinking. Many people took to Twitter to criticize the lack of enforcement, saying if children are required to wear masks at school, attendees should adhere to the same rules.

"My students all have to wear masks all day [Monday], inside and outside of their classrooms because we are in LA County," wrote one Twitter user. "Same place as the Super Bowl. But not a mask in sight here."

"We were a little bit disappointed people didn't wear their masks - most of the time, there were N95 masks on everybody's seat," he said. "However, we had a great event. People had a great time and .... This is a pinnacle for Inglewood. We've come all the way back to the city of champions again."

As was the case during all games at the facility this season, all attendees had to show proof of COVID-19 vaccination or a recent negative test to enter the stadium.

Many of the measures have been in effect at SoFi Stadium throughout the season, including:

The pandemic has been a constant point of inquiry leading up to the game.

Some critics have questioned the propriety of holding such a major event in a county still in the throes of a pandemic.

Others have scoffed at the need for the mask mandate, citing falling case numbers and the state's plan to lift its indoor mask-wearing requirement this week.

The number of COVID-positive hospital patients continues to plunge in L.A. County, declining by 125 people to 2,086 on Monday, according to the latest state figures. The number of those patients in intensive care was 439 on Sunday, down from 461 a day earlier.

Hospitalizations had climbed to over 4,800 in mid-January at the height of the omicron-fueled winter surge in cases.

Under guidelines announced this month by county Public Health Director Barbara Ferrer, if the hospitalization number stays below 2,500 for seven consecutive days, the county will consider itself to be entering a "post-surge'' phase, and will lift its mask mandate for outdoor "mega-events'' and outdoors at schools and childcare centers.

Ferrer said last week that absent a sudden increase in hospitalizations, the outdoor mask mandate could be lifted as early as Wednesday.