10,000 people in SoCal celebrate their new US citizenship 1 week before Super Tuesday 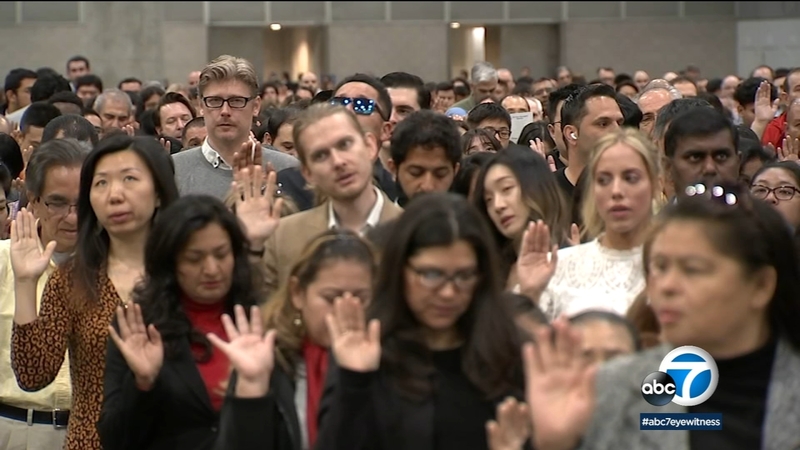 10,000 people celebrated their new citizenship a week before Super Tuesday

LOS ANGELES (KABC) -- Just a week before Super Tuesday, approximately 10,000 people celebrated their new U.S. citizenship by taking the oath of allegiance. The newest citizens were inducted in two ceremonies Feb. 25 in the south hall of the Los Angeles Convention Center.

"I am very very excited, we've been waiting for this for so long," said Aurora Rodriguez speaking on behalf of her brother who just arrived from Philippines.

The crowd represented 140 countries, but as they waved their flags proudly, they were united as Americans.

A new citizen from Great Britain said, "It feels really enlightening, it's really emotional, and I had some tears. It's really intriguing to be an American."

With their new citizenship comes new responsibilities. The U.S. citizenship immigration services staff was on location handing out voting registration cards to encourage everyone to exercise their new rights as Americans.

California residents are already hitting the polls at early voting locations to cast their ballots before the Democratic primary on March 3rd.

For the first time, Margaret Ekwonye from Nigeria, will exercise this precious right with her newly claimed citizenship.