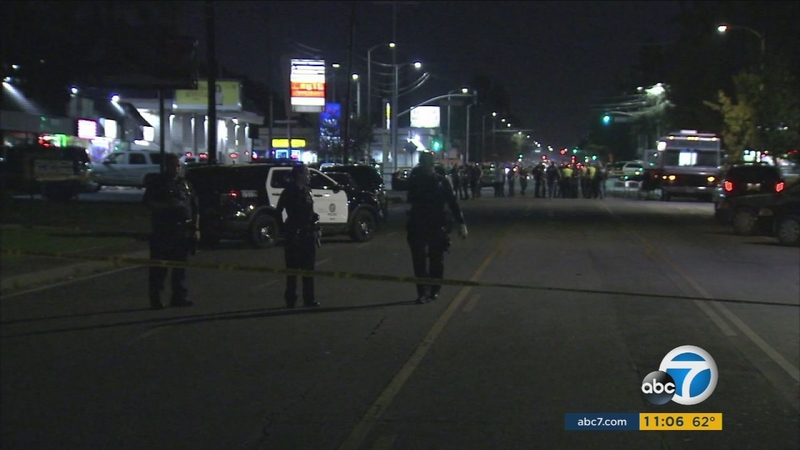 VAN NUYS, LOS ANGELES (KABC) -- A suspect died at a hospital following an officer-involved shooting in the Van Nuys area on Wednesday.

The shooting happened at Sherman Way and Kester Avenue just after 4 p.m., when an LAPD gang unit discovered what was believed to be a stolen vehicle.

Police said the occupants of the car fired shots at the officers, and the officers followed the suspects eastbound on Sherman Way until the car crashed into a light pole.

The driver got out of the vehicle and at some point an officer-involved shooting occurred, according to Lt. Barry Montgomery of the LAPD. He added that before the car crashed, those suspects opened fire on police during the chase.

Both streets were shut down to traffic as a large crime scene was taped off. The suspect was down and paramedics were seen working on the individual before he was transported in an ambulance.

Two suspects were taken into custody and 1 person was wounded in an officer-involved shooting in Van Nuys on Wednesday, Nov. 15, 2017.

Cellphone video captured just seconds after the officers opened fire on the man showed a black shape in the background as he laid handcuffed.

He was taken to a hospital, where he later died. No officers were injured in the incident.

Witnesses said they heard between four to eight shots in rapid succession.

"Kind of like surreal. I didn't know if it was really happening. I've been at this church for 17 years and nothing like this has ever happened around this property," Chris Rodriguez said.

Two female suspects were taken into custody after the encounter with officers, police said, and two handguns were recovered at the scene.