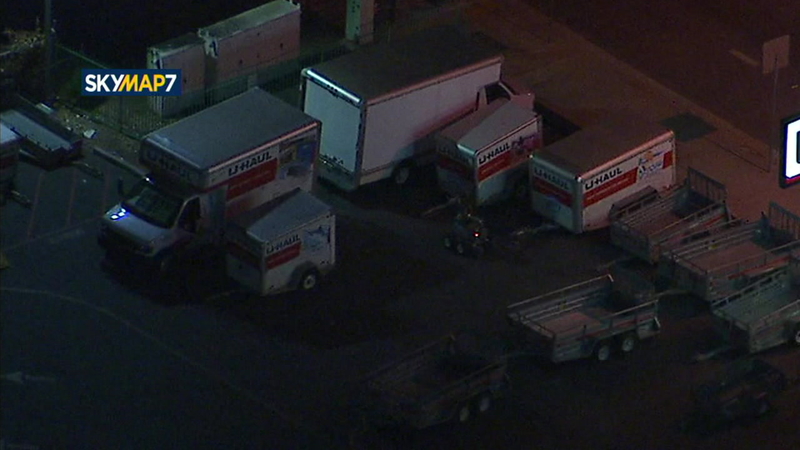 PASADENA, Calif. (KABC) -- An item that appeared to be an explosive device attached to the back of a U-Haul truck triggered a massive evacuation of a Pasadena neighborhood Monday night until authorities were able to determine the item was not a threat.

Officials evacuated about 10 blocks around the area of Raymond Avenue and California Boulevard. Streets were closed down and Metro Gold Line service was also interrupted.

The bomb squad deployed a robot to remove and examine the object. It was later placed under sandbags in the parking lot. The robot fired once in a detonation attempt, but the object did not explode.
Police were called to the area Monday evening after the suspicious item was spotted attached to the back of the truck.

Officers and the bomb squad examined the object and determined it looked like a real explosive device. It was a cylinder object about 6 to 8 inches long and had wires and tape. The device was attached to the back of a U-Haul truck parked on the street near the facility.

The area is to the east of Huntington Hospital, but the facility itself was not evacuated.

Streets were closed in areas that included California Boulevard from Fair Oaks Avenue to Arroyo Parkway, and Raymond Avenue, from Pico Street to Bellevue Drive.

One of those buildings in the area included NPR's local station KPCC. Radio host Nick Roman said the organization was asked to evacuate.

"We had the security guard who came in and said, 'We've been told to get out of the building.' We're not going to mess around with that," he said.

"There's just so many crazy things happening. I mean there was just a mass shooting in my hometown Pittsburgh, so hearing anything that could be suspicious or dangerous comes very near and dear to me. I'm scared," she said.

Authorities took the threat seriously enough to order AIR7 HD to stay about 3,000 feet above the ground, roughly double the normal altitude.
Metro Gold Line service was also suspended between the Lake and South Pasadena stations as authorities investigated the device. Buses were deployed to transport passengers

FBI and ATF agents were at the scene assisting local authorities.

Pasadena Police Chief John Perez had a message for whoever left the device: "We'll catch you and you'll pay the price for creating this kind of device and scaring the community."

Authorities said they will be looking at surveillance video from nearby buildings to see how long the truck had been parked in the area as well as identify a suspect.