Suspect in custody after shooting at CHP officers in Sylmar, authorities say

A suspect is in custody after authorities say he began shooting at California Highway Patrol officers in Sylmar.
KABC 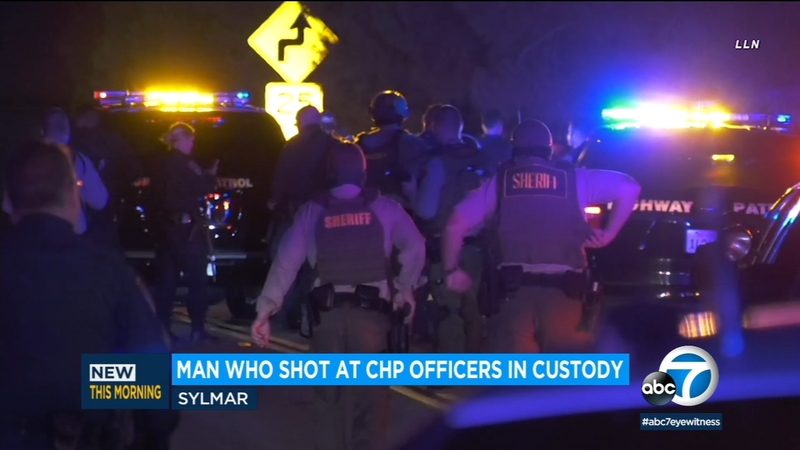 Suspect in custody after shooting at CHP officers in Sylmar

CHP says officers arrived to the 12900 block of Little Tujunga Canyon Road to investigate a report of a stolen vehicle when the suspect opened fire.

Three officers came under fire, but no officer was struck.

According to CHP Officer Tony Polizzi, the shooting was reported at about 8:21 p.m.

The officers abandoned their patrol cruisers as they sought cover. The suspect was seen entering at least one of those CHP cruisers for a time.

CHP officers were shot at by a suspect in Sylmar, according to authorities. No officer was struck by gunfire.

AIR7 HD was over the scene as the suspected shooter appeared to make his way toward officers with his hands up along the road. The man suddenly staggered off the roadway and into a drainage ditch, possibly injuring himself.

A huge response from law enforcement was seen in the area. Dozens of heavily armed officers responded to the call for help.

The Los Angeles County Sheriff's Department advised the public to avoid the area. LASD tweeted the suspect was in custody at 12:03 a.m. Tuesday.

Family members say the man's son has been missing for two years and that he is distraught.

Officers believed the gunman was taking cover inside a storm drain and a K-9 unit was called.