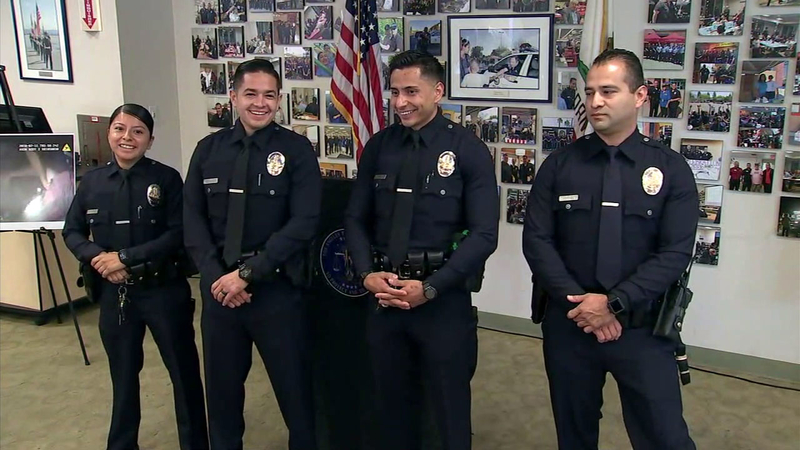 SYLMAR, LOS ANGELES (KABC) -- Four Los Angeles police officers who risked their lives to save a man from a Sylmar house fire talked about their rescue effort Wednesday.

The officers were identified as Luis Lopez, Ken Morales, Jose Moya and Christina Shente. Most of the officers have only been with the LAPD for a few years.

On Tuesday night, a fire erupted at a Sylmar home in the 13600 block of Brussels Avenue. The officers were responding to another call when they saw the fire. Neighbors told them a man was still inside the home.

The four quickly ran in to help, using a neighbor's hose and a baton to break a sliding glass door.

"We couldn't see anything through the windows because there was so much smoke in there," Morales said. "As soon as we smashed the glass door, the smoke just came screaming out."

Body camera footage showed the officers taking the man out of the home and within seconds, flames erupted through a nearby window.

"I wasn't really scared for my life. I was more scared for (the man)...I can probably say that was true for my partners as well," Lopez said.

Neighbors identified the man as Charles, who is between 50 and 60 years old. They said his wife died a few years ago. Authorities said Charles remained in critical condition Wednesday.

"We were the first ones there. Just because we're law enforcement, it doesn't mean we can't save somebody," Morales said. "We knew we were the only ones that were there to help him at that moment...that's what kept us going."