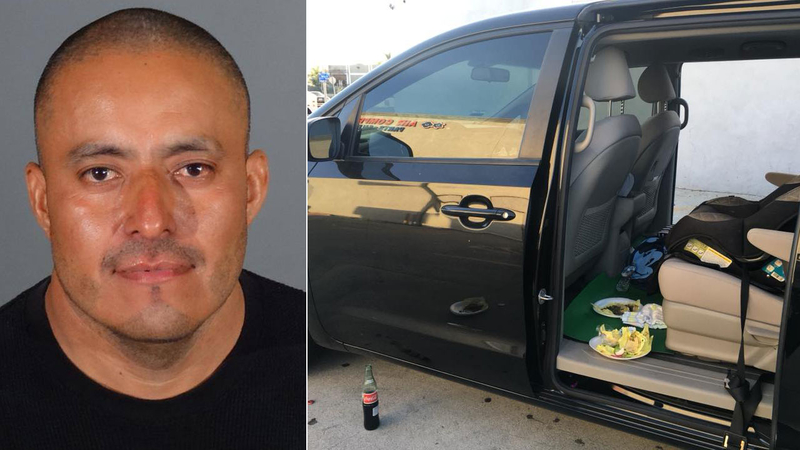 CITY OF INDUSTRY, LOS ANGELES (KABC) -- A mother of four used a taco to distract an armed suspect who claimed to be an undercover officer in the City of Industry.

Around 6:34 p.m. Sunday, a family of six who had been at a waterpark all day were heading home and stopped by a taco truck in the 13400 block of Valley Boulevard for a bite to eat. The family pulled over in their minivan and grabbed some tacos and soda.

While the family was eating around their van, a stranger on a bicycle approached them. He began to intimidate and scare both parents and their four children. He started flashing a gun that he'd concealed in his waistband and showed off a badge, saying he was an undercover cop, according to L.A. County sheriff's deputies.

The mother's instinct kicked in and she knew the stranger was lying about being an officer and that he could harm her family. She came up with a plan to put some distance between the suspect and her husband, three daughters and toddler, who was strapped into a car seat.

She offered the man a taco and told him she needed to get him napkins from the truck. He continued to flash his gun and ransacked her purse as she walked away.

As the woman approached the taco truck and customers in line, she told them not to look back at her family van and urged them to call 911 to help her. She said the man was flashing a gun, which was scaring her family and that she feared for their lives.

The customers in line, as well as the taco truck man, called 911 to provide authorities with the suspect's description and location.

Deputies quickly arrived and saw the suspect next to the van. When he saw the deputies getting closer, he tossed the gun into the family van and tried to get inside. The deputies were able to stop the suspect and arrest him before anything else happened.

The deputies recovered the gun and made sure the family of six was unharmed.

Authorities identified the suspect as Juan Rodriguez, who was arrested and booked on suspicion of child endangerment, impersonating a peace officer and outstanding warrants.

Anyone with more information and who saw the suspect before the incident is urged to call the L.A. County Sheriff's Department Industry station at (626) 330-3322. Those wishing to remain anonymous may call Crime Stoppers at (800) 222-8477.