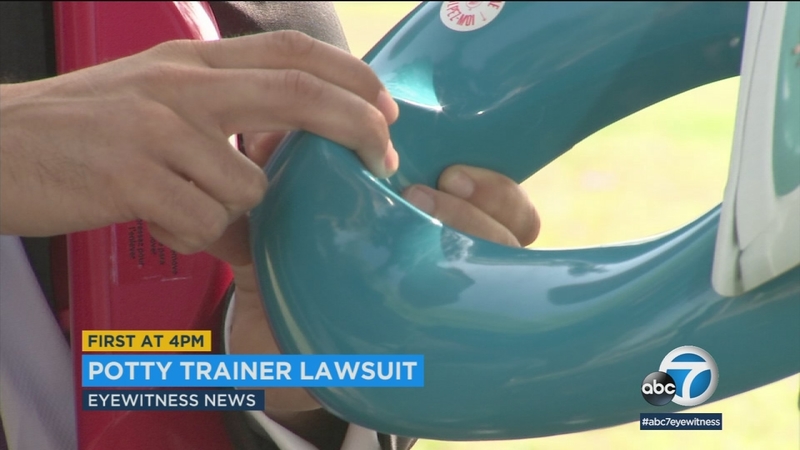 LOS ANGELES (KABC) -- More than a dozen families have joined a class action lawsuit brought against the makers of the WeePOD potty-training seat and the retailer, Target, where it was sold.

Attorneys for those families claim more than 15 toddlers have been injured by the seat.

"We were, I don't know how to explain it, horrified seeing that happen to our son," said one father, Daniel, who is part of the lawsuit. "There was blood, skin, everything everywhere."

Daniel says the injuries occurred when he tried lifting his 4-year old son off the Weepod Basix potty recently. His boy, he says, screamed in utter pain. The parents say they took their son to the emergency room.

Attorneys for the parents say toddler boys' genitals can become stuck in the seat causing lacerations. They say Prince Lionheart Incorporated, the manufacturer of the Weepod Basix, has made corrections to the seats. But, they claim 500,000 of the defective seats are still being sold on store shelves. They want those seats removed from stores immediately.

"The company is refusing to stop selling this defective product," said John Carpenter, a co-attorney for the parents. "They've modified it, but the defective ones are still out there, and they're going to be hurting kids in the future."

Brad Snyder, the attorney for Prince Lionheart Incorporated, issued a statement saying, "The Court has issued a protective order that bars the parties and their attorneys from disclosing any information that has been produced during the discovery process. Persons who violate the protective order can be held in contempt of court. For that reason, I am unable to comment about the details of the case. What I can say is that my client is a family owned company that has been developing products that meet the highest standards in safety, quality and performance for the past 45 years. Suffice it to say that we disagree with the claims that are being made by the plaintiffs and their attorneys in this lawsuit. The attempt to try this case in the press is distasteful, and we will wait for the jury to decide."

Target also released a statement in response to the lawsuit: "Target is committed to providing high quality and safe products to our guests, and we require all of our vendors to follow product safety laws and CPSC guidelines for their products that they sell at Target. Prince Lionheart manufactures the product and sells it at a variety of retailers. Prince Lionheart has been in direct communication with the guest's attorneys on this lawsuit, and any additional questions should be directed to them."
Report a correction or typo
Related topics:
businesssafetychildrenchild injuredclass action lawsuitlawsuittarget
Copyright © 2022 KABC Television, LLC. All rights reserved.
TOP STORIES
3 local teens identified as victims in fatal Pasadena crash
Airlines ask Biden administration for 'immediate intervention' on 5G
Missing diver's body found off Huntington Beach coast
Stolen WeHo Frenchie recovered in Philadelphia, reunited with owner
Nurse in deadly downtown LA attack remembered by friends, neighbors
Arrests in fatal stabbing of man who tried to break up fight in LA
Rams beat Cardinals 34-11 to advance in the NFL playoffs
Show More
Omicron surge hasn't peaked nationwide: US surgeon general
LA Zoo honors Betty White on her 100th birthday
Watch the new trailer for Marvel's 'Moon Knight'
Dozens of LAX flights delayed, canceled due to East Coast storm
MLK Day: Physicians reflect on efforts to combat health care inequity
More TOP STORIES News