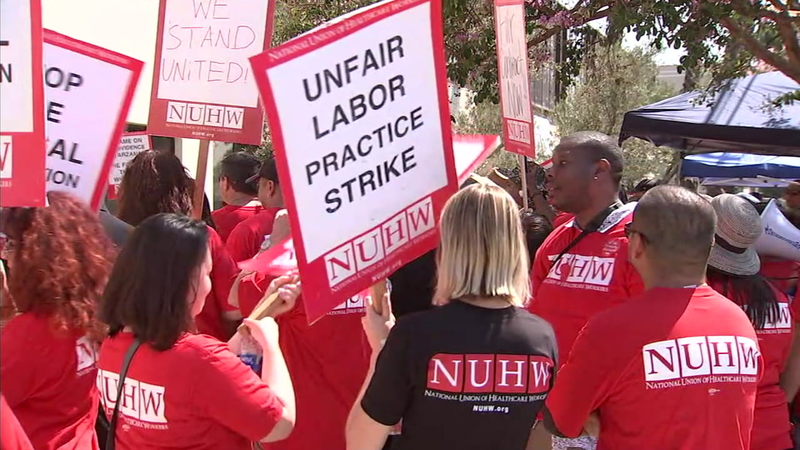 TARZANA, LOS ANGELES (KABC) -- Hospital workers in Tarzana held a one-day strike to protest fair wages on Thursday, but their employer won't let them return to work until next week.

"They've told us that we are not able to go back for five days, we're not going to get paid, we won't be able to use our paid time off and it will affect us," striking employee Pablo Gutierrez said. "But it's a sacrifice that we're willing to make to make a stand."

According to the hospital, however, the employees are not being locked out. Rather, the agency from which it hired temporary workers requires a minimum employment period of five days.

"The hospital must commit to--and pay for--the full five days of agency staffing," the hospital said in a statement. "For this reason, employees who choose to participate in the strike and are temporarily replaced by these agency workers will return to work once our commitment to the temporary staffing company is met."

The earliest the striking hospital employees can return to work is next Tuesday.

After nine months of talks, both sides have reached an impasse.

"We asked for a 3 percent cost-of-living raise and they countered back with a 1.5," National Union of Health Care Workers spokesperson Alecia Cornelius said. "I don't know in what world you're from, but 1.5, I don't think that's even an actual raise. So we've asked for the minimum of 3 and the maximum of 5."