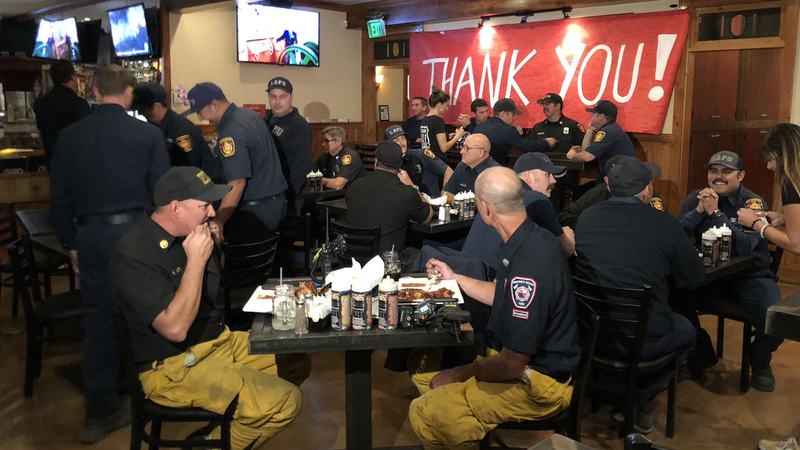 AGOURA HILLS, Calif. (KABC) -- The owner of Tavern 101 Grill & Tap House, a restaurant that was under mandatory evacuation orders in Agoura Hills, opened his doors and kitchens to feed firefighters battling the Woolsey Fire.

Marco Gonzalez, who owns the business, was one of the thousands of people evacuated in the community overnight Thursday. As he watched news coverage of the fires all day Friday, he realized he had to do something to help.

"He knew that a lot of houses on his street at that point were gone. So he woke up the next morning and said, I'm going to do what I know how to do and I'm going to go cook," sister-in-law Lindsay Cannon said.

On Saturday morning, he went to fire command and was cleared to reopen his business, where he cooked up hot meals for more than 700 firefighters.

His sister-in-law said that at the end of the night, Marco was out of food and felt he needed to continue to help them.

She reached out to the community online and created a Venmo account, where $25,000 was quickly raised. People who donated money or came in to help the restaurant also created a Thank You banner for the firefighters and signed messages of love all over it.

"We just keep telling everybody we're ready to feed a small army. Please come in! He wants to help," Cannon said.

Within the past 24 hours, more than 1,000 firefighters have received a hot meal. Those firefighters also had time to sit down, watch television and rest before heading back out to protect homes and fight the Woolsey Fire.

One crew had been battling the blaze in Bell Canyon.

"Only hot meal of - what have we been here for four days? It's much appreciated. Thank you very much. It was really delicious," one firefighter said.

It's only a small gesture of the gratitude Gonzalez feels because his home was one that was saved by the firefighters.

"What we're doing here is very minimal compared to what they're doing," Gonzalez said.