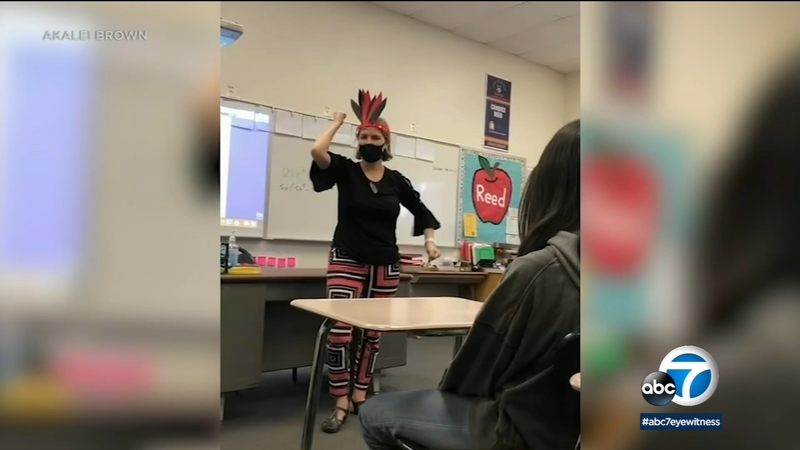 RIVERSIDE, Calif. (KABC) -- Protesters stood outside the Riverside Unified School District office Thursday afternoon calling on district officials to respond to their demands for action after a viral video showed a teacher performing a mock Native American dance while wearing a fake headdress.

"She took it way too far, and you know, she had to be under some rock not to know how offensive that is," said Dee Dee Manzanares Ybarra with the American Indian Movement of Southern California.

The video shows John North High School math teacher Candice Reed dancing and mimicking chopping motions during a lesson. A student captured cellphone video of Reed as she was teaching a trigonometry mnemonic "SohCahToa" to the class.

"I watched the video and it kind of hurt my feelings, and it was like - wow, that actually happened," said 13-year-old Landin Yglesias.

A teacher at North High School in Riverside has been placed on leave as the district investigates a video showing the instructor dancing in Native American-inspired headgear.

Yglesias belongs to the Cahuilla Band of Mission Indians along with two others. He drove in from Redlands to attend and support the protest with his mother who became emotional discussing her reaction to the now viral video.

"He takes his culture very serious. I'm glad he wasn't in that class. He would have been so offended and hurt. I was hurt for him and for his people," said Ruby Yglesias.

Organizers of the protest are demanding the school district terminate Reed, implement diversity training and Native American history in the classroom for both staff and students.

"The main objective is to hold the teacher accountable for the lack of sensitivity she demonstrated in the classroom along with implementing Native American history be taught and (critical race theory) be taught in the classroom," said Paulina Kiriakos.

Part of that accountability they want is for Reed to apologize.

"She has yet to issue a public apology. She needs to apologize to all of her victims because this is emotional trauma, humiliation and disrespect," said protester Betty Perez.

RUSD did not comment on the latest protest, but did issue a statement last week.

It read in part: "These behaviors are completely unacceptable and an offensive depiction of the vast and expansive Native American cultures and practices. Her actions do not represent the values of our district. The teacher has been placed on leave while the District conducts an investigation."